Saving the World: one interactive dark ride at a time 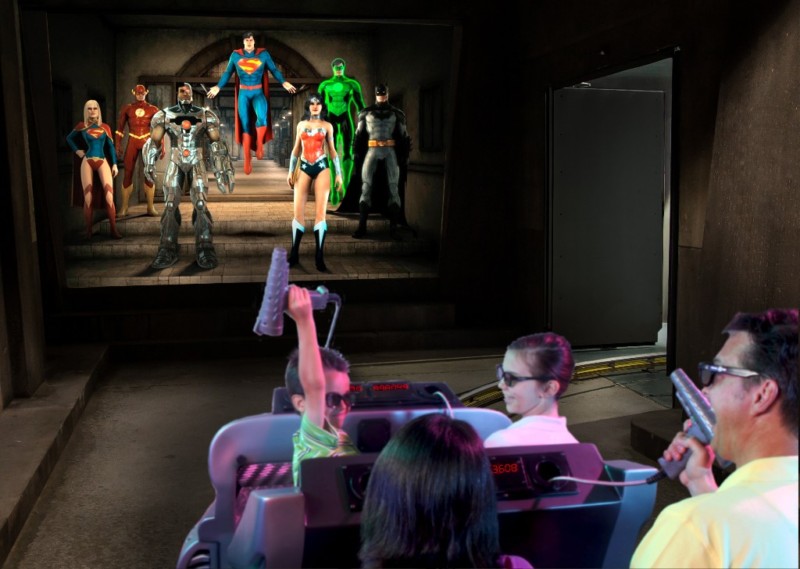 Triotech, Sally Corporation, and Alterface Projects each bring something to the art of virtual shoot-em-up

Dark rides have been around as long as the amusement park industry. Over the years, a variety of elements have been added to enhance the guest experience – animatronic characters, 3D film, and finally, interactivity. Each element makes the ride more like being inside a video game.

As the dark ride continues to be reinvented for new generations of theme park fans, scenarios where the rider/player saves the world (or perhaps the bakery) are popular as ever. Three suppliers each bring something special to the medium: Wonder Mountain’s Guardian, supplied by Triotech, engages riders with the world’s longest interactive screens. For Justice League Invasion 3D at Warner Bros. Movie World, Sally Corp. combined interactive video with physical targets and animatronics. And for the Rabbids product offering, Alterface Projects utilizes an innovative interface to determine where players’ artillery would actually land. 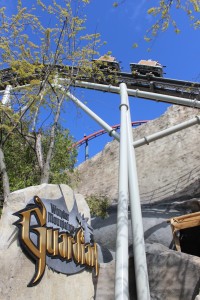 A rollercoaster transitions into a journey inside the mountain

For the Cedar Fair-owned Canada’s Wonderland near Toronto, Triotech designed the interactive elements, media content and 4D effects for the park’s $10 million attraction for 2014, Wonder Mountain’s Guardian, the first attraction to be built inside the park’s iconic manmade mountain. According to Christian Martin, Triotech’s Vice President of Marketing, “Canada’s Wonderland is always wanting to do new stuff and they always wanted to do something with that space. There had already been a coaster going around the outside of the mountain, so that’s how they wanted to start this ride. There were really three partners – the park, us, and ART Engineering, which built the coaster.”

The ride begins with a preshow video, designed as an old storybook on worn parchment, which gives the backstory of how the King fought a dragon and lost his crown in the depths of the mountain. It is the mission of the riders to head off and retrieve it. The preshow is hosted by a ranger character, who appears again throughout the interactive portion of the ride. Boarding two car trains, with passengers facing both front and back, riders are sent up a roller coaster lift hill and swoop around the mountain while rising and dipping on the new coaster track.  Finally, the train enters an opening in the side of the mountain. As a gate closes behind riders to keep out natural light, the ride vehicles rotate 90 degrees, facing the world’s longest interactive screens, measuring 500 feet in total length.

Having such long screens gives the effect that the riders are continually moving and descending into the depths of the mountain. This effect is maintained through the video image, as the ride vehicle maintains a steady elevation and speed during the dark ride segment. Distractions from surroundings and other vehicles are minimized by creating a halo effect around the real time 3D graphics, where the periphery of the immediate viewing area is blacked out. The entire experience is progressed down the screen through a continuous series of dual 3D projectors. 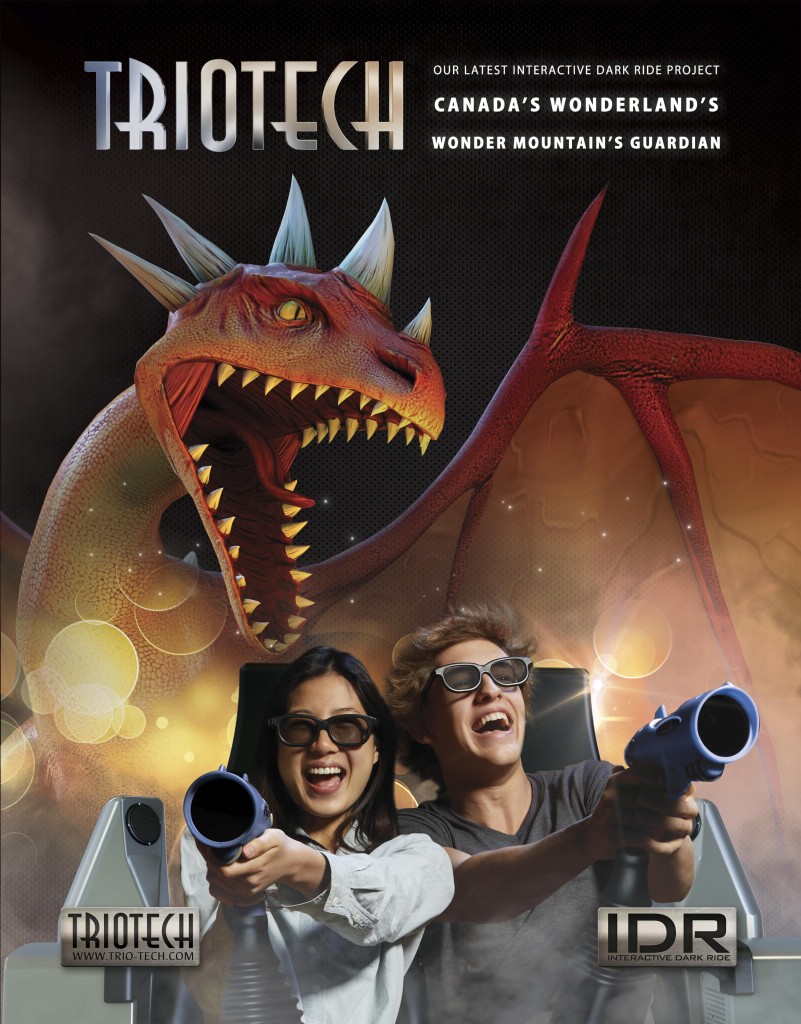 Triotech’s setup at Canada’s Wonderland supports interchangeability. With the need to only change the program inside the mountain and the preshow video, multiple shows can be presented. There are already plans for Wonder Mountain’s Guardian to take up a different storyline for Halloween. Martin notes that even more than one show can be programmed for the same date. He says, “The tradeoff is theming. But the general effects are there that can be used for a show – sound injection for feedback, force feedback in the guns, light, heat, wind, and smoke as our 4D effects. We don’t currently have water effects on this attraction but they could be added.”

What makes this unique over other dark ride adventures is, as Martin puts it, “Who saved the world? The people are in the game on this ride rather than just watching the game.”

Battling Starro the Conqueror alongside superheroes

Another place riders can save the world is at Warner Bros. Movie World on Australia’s Gold Coast. In Justice League, Alien Invasion 3D, an AUS$9 million attraction that opened in 2012, they join the DC superheroes in battling a menace from outer space. Designed by Sally Corporation of Jacksonville, FL, Justice League represents the latest in a long line of licensed attractions from Warner Bros. 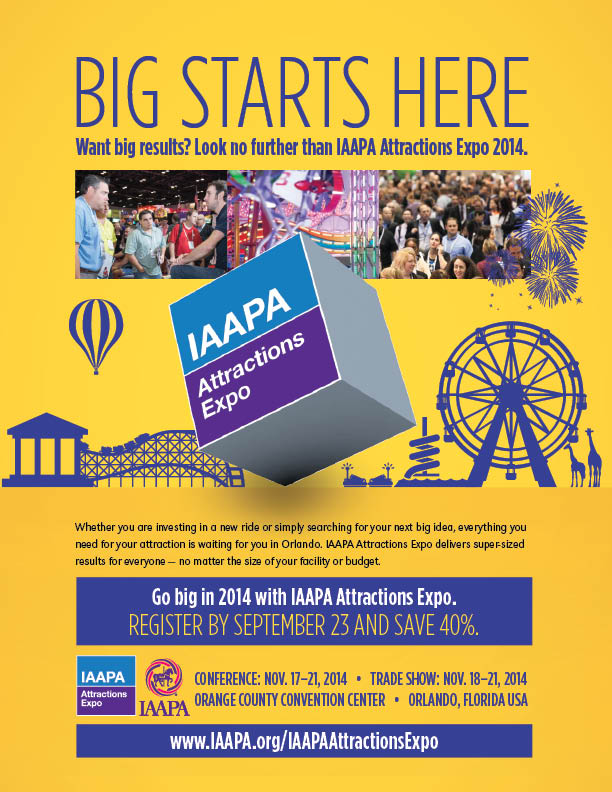 Working with the park, Warner Bros, and DC Comics, Sally set out to replace a Batman simulator with something unique and interactive. The simulator attraction and theming were removed and the show was redesigned. According to Sally Chairman and CEO John Wood, the villain of Starro the Conqueror, was suggested for the attraction by DC. “He proved perfect as the starfish made perfect targets.” One of Sally’s most advanced animatronic characters, Cyborg, resides in the queue. After that, a number of simple animations exist on the ride.

Throughout the queue, a preshow video comprised of television news stories gives the background to the ride’s story. A scanner showing a negative image indicates that riders in the queue have not been infected by Starro’s spores. Finally, Batman appears on a screen speaking with Cyborg as riders board their cars.

Throughout the adventure, citizens have been infected by Starro’s starfish and they are also thrown at riders on 3D video screens. Every starfish target gives a score. In the video portion, the starfish can be blown up. When physical targets are hit, the gun vibrates and the lights on the starfish go out. 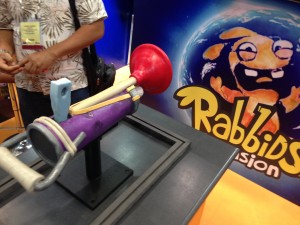 Although the guns on Justice League were designed by Sally, the system they run on was developed by Belgian company Alterface, which is currently creating an interactive dark ride based on French videogame company Ubisoft’s popular characters the Rabbids, a group of crazy rabbit-type creatures with an anything goes attitude.

Since 2001, Alterface has been manufacturing interactive rides and theaters using both physical and media interfaces. The company is currently in talks with a number of operators for the Rabbids Invasion attraction. The cost and footprint of the attraction will vary depending on the individual needs and availability of the location.

Rabbids will be similar to another next-generation interactive ride introduced by Alterface at Phantasialand in Germany. Called Maus au Chocolat, it tells a story of mice infesting a bakery and it’s up to the riders to kick them out. According to Alterface CEO Benoit Cornet, the ride runs three-car trains, each with two riders on each side facing in opposite directions. During interactive segments, the vehicles rotate to face six interactive screens, with two players shooting at each screen. Speakers at the height of the riders’ ears give personal messages related to their performance.

Cornet says that storytelling is important in telling riders what the mission is within the first five seconds. He adds, “Without that tool in hand, it’s just theoretical.” Alterface uses a combination of pre-rendered video, for scenes designed to be viewed, and real-time animation for strong action scenes. They have discovered that commercial game engines tend to work best. For the Rabbids rides, Ubisoft itself will handle the animation.

On Rabbids, a standard formula will be used for the ride. The gun will be a plunger, which fits in with the humor of the franchise. The first scene will be designed to be both fun and funny, and will give be used to instruct riders how to use the plunger. They get their first feedback and then move on to the second scene, where they will spend more time getting used to the shooting device. After that, scenes become more difficult. 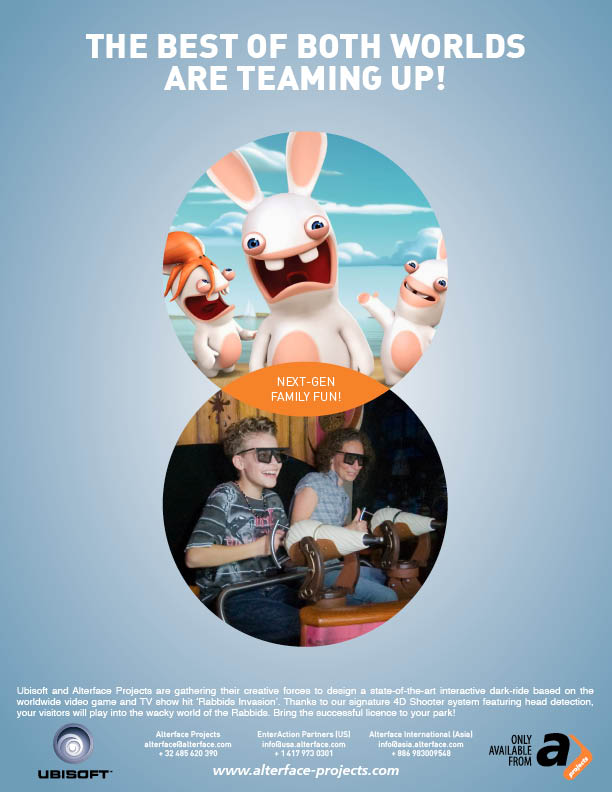 There is no standardized attraction format set for Rabbids, other than it will combine physical sets with target screens. The storyline has broad appeal, and, as Rabbids don’t talk, there’s no need for regional dubbing.

Alterface developed a system called “Head Detection,” which tracks riders’ head movements. This allows the show system to determine where they’re looking and make adjustments as to where their projectiles will fall behind the screen. This technology is currently in use in both Maus au Chocolat and Sally’s Justice League and will be incorporated into Rabbids. • • •

Joel St-Denis of Christie talks about the latest AV tools