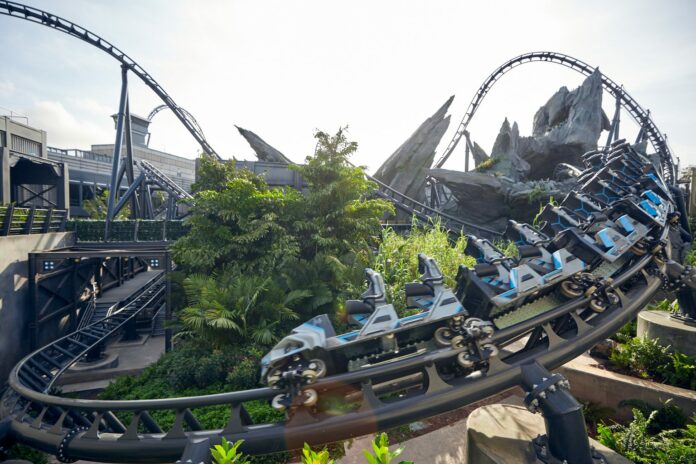 Destination theme park resorts like Universal Orlando Resort have built their brand around highly themed attractions where storytelling almost always takes the lead. When Universal Studios and Islands of Adventure each opened, ride systems were seemingly secondary to the theming and set design that surrounded them. Even the resort’s first major roller coasters, Incredible Hulk and Dueling Dragons, were wrapped in detailed storylines and intricate theming.

Islands of Adventure’s latest attraction, VelociCoaster, continues in that tradition. Seemingly carved out of the rocks of the Jurassic Park area of the park, VelociCoaster comes with a straightforward narrative and a realistic themed environment. The queue takes the most advantage of this, with a viewing area overlooking one of the coaster launch sections, enhanced by transparent screens showing raptors chasing after the roller coaster. A subsequent room exhibits realistic raptors in captivity — though apparently not for much longer!. Media and special effects in the first launch tunnel keep the storyline going into the actual ride experience.

But the real lesson of VelociCoaster is that the ride actually matters – a lot. It’s one thing to be told a story but quite another to experience a story through movement, speed and sound. In the case of VelociCoaster, the ride is faultless. Two LSM launches, taking riders to 50 mph and 70 mph respectively, are mixed in with just enough inversions, several near-miss rock collisions, and a twisted track that keeps riders guessing which way they are headed next.

Created by Intamin, the track is 4,700 feet long, reaches a height of 155 feet and lasts just under two minutes. At night, the ride is enhanced with dramatic lighting both on the trains themselves and around the attraction.

Best of all, VelociCoaster is delightfully re-rideable. Without a doubt it is a thrilling roller coaster — and coaster enthusiasts have rightfully embraced it as a fan favorite — but the comfortable seats, non-restrictive harnesses and smooth track make for a ride that just about anyone would want to repeat.

A revitalized line-up of coasters

Islands of Adventure opened in 1999 with four roller coasters: Incredible Hulk, Dueling Dragons (two separate coasters) and Pteranodon Flyers, the latter being the park’s only family roller coaster until Flying Unicorn — now Flight of the Hippogriff — opened one year later.

Interestingly, with the addition of VelociCoaster, Universal has nearly completely revitalized its coaster lineup at the park. Incredible Hulk was closed for nearly a year in 2015/2016 while the majority of the track and trains were replaced, though essentially keeping the same ride profile.

The two Dueling Dragons coasters (renamed Dragon Challenge in 2010) were removed in 2017 to be replaced by the Thea Awarded Hagrid’s Magical Creatures Motorbike Adventure, also built by Intamin.

VelociCoaster’s debut brings the park’s roller coaster total back to five (three intense and two of the family variety). While it is unusual for a park to replace or refresh their major coaster attractions within such a short period (essentially five years) it speaks to Universal’s commitment to reinvesting as a proven strategy for increasing visitation. At Islands of Adventure, the park invested not only in new capital but also in refreshing existing attractions. Particularly with VelociCoaster, it seems to be money well spent.