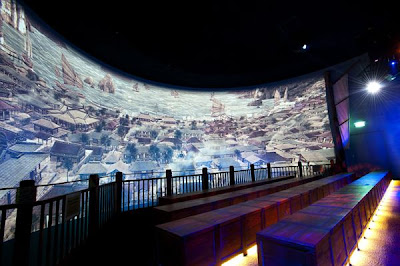 HOLLYWOOD, Calif. (Jan. 9, 2012) – A film by Super 78 Studios for a brand new attraction that brings its audience face to face with the forces of a Southern Pacific Typhoon scored a nomination today from the Visual Effects Society for a coveted VES Award. Super 78 Studio’s production of Typhoon 360, the feature attraction at the new Maritime Experiential Museum and Aquarium in Singapore, netted a nomination in the Outstanding Visual Effects in a Special Venue and will compete with Disney’s Star Tours Revamp and Universal’s Transformers for the coveted visual effects award next month.

Filming for Typhoon 360, which features state-of-the art, real time effects including robotic, and high-resolution projections, required the meticulous integration of practical set pieces, lighting, projection mapping, and included 60 different shots for the six-minute film. And, it was produced at just a fraction of the cost of its big-budget competitors.

“We’re quite proud that a low-cost and technologically-stunning venture like Typhoon 360 measures up to the same standards and level of performance of deep-pocket projects from Disney and Universal,” said Brent Young, CCO and Creative Director for Super 78 Studios, and Co-Writer, Director and Visual Effects Supervisor for Typhoon 360. 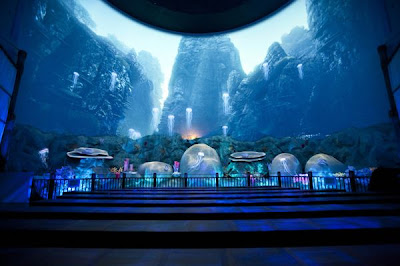 It’s the second consecutive year a Super 78-produced film has been nominated for a VES award. The firm’s work on Flight of the Dragon, a popular Flying Experience attraction at one of China’s largest theme parks, was nominated for Outstanding Visual Effects in a Special Venue in 2011, and Super 78 also was previously nominated for its work on the Busch Gardens Curse of Darkastle, and for a VES television award for the creation of Ben 10 for the Cartoon Network. The 10th annual VES Awards honor outstanding visual effects in 23 different categories of film, animation, television, commercials, special venues and video games. Winners will be announced Tues., Feb. 7 at a ceremony at the Beverly Hilton Hotel.

Joe Kleimanhttp://wwww.themedreality.com
Raised in San Diego on theme parks, zoos, and IMAX films, InPark's Senior Correspondent Joe Kleiman would expand his childhood loves into two decades as a projectionist and theater director within the giant screen industry. In addition to his work in commercial and museum operations, Joe has volunteered his time to animal husbandry at leading facilities in California and Texas and has played a leading management role for a number of performing arts companies. Joe previously served as News Editor and has remained a contributing author to InPark Magazine since 2011. HIs writing has also appeared in Sound & Communications, LF Examiner, Jim Hill Media, The Planetarian, Behind the Thrills, and MiceChat His blog, ThemedReality.com takes an unconventional look at the attractions industry. Follow on twitter @ThemesRenewed Joe lives in Sacramento, California with his wife, dog, and a ghost.
Share
Facebook
Twitter
Linkedin
Email
Print
WhatsApp
Pinterest
ReddIt
Tumblr
Previous articleDearborn FEC Chooses TokensDirect
Next articleUniversal Theme Parks Celebrate Studio’s Centennial