This article, originally published in January 2014, is part of “Tales from the Expo,” an InPark Magazine online book written by James Ogul and edited by Judith Rubin.

[dropcap color=”#888″ type=”square”]I[/dropcap]n 1994 Congress passed a law that stated that the United States Information Agency (USIA) could not obligate funds for U.S. Pavilions at World’s Fairs unless the funds were specifically authorized and appropriated for that purpose. In 1999 this law was replaced with a new law containing the same language but adding a few exceptions. When USIA was absorbed by the State Department this language carried forward.  As a result, the U.S. has not had Federal appropriations to mount its expo pavilions and has had to seek funding from the private sector.

Photo at top: At the USA Pavilion, Shanghai Expo 2010, Secretary Clinton, Ambassador Huntsman and many others in front of the Donor Wall. Photo courtesy James Ogul.

In fact, the practice of seeking private sector support for these endeavors goes back farther than that.

The ’80s: Donor walls and product placement
“You’ll get your name on our donor wall at the pavilion and you will appear in the final report that goes to Congress.” That was what we told potential donors back in the ’80s. That was usually the full benefits package, although sometimes it was augmented with product placement. Product placement in expo pavilions achieves the same benefit to sponsors as it does in movies and other vehicles that reach a desired audience.

Sometimes there were unexpected issues with product placement. At Knoxville Expo 82 Sony donated over a hundred TV monitors that were used throughout the pavilion. We got critical letters referring to “Japanese TVs in an American Pavilion.”

Product placement had some other interesting dimensions. A scene of a giant-screen film that we had in production for a pavilion showed a particular manufacturer’s monitors in an office setting. Then a computer donor came on board – not the same one as in the film, and we had to reshoot the scene. Then there was “reverse engineering,” or serendipity. One scene prominently showed the brand on a piece of construction equipment. It seemed like a perfect opportunity to approach the company for support. They sent reps to review the film, liked it, and donated.

Along the line we got into naming parts of the pavilion for sponsors as a benefit to them. The VIP lounge was a natural. A company name on the lounge gave excellent exposure as it was seen by heads of state and corporate CEOs. At New Orleans (1984) we had the Ford Lincoln Mercury Theaters – two 750-seat, 3D theaters with a film by the late Charles Guggenheim. Then in Tsukuba, at Expo 85 we went the extra step of having a corporate section where participating corporations paid rent for space and paid a maintenance fee. In Vancouver Expo 86 we expanded on the non-federal component by having the states of California, Oregon and Washington join the U.S. Section with adjacent pavilions. This counted to enhance the scale and quality of our presence without spending federal tax dollars.

The publicity benefits to corporations donating to U.S. Pavilions can take on unexpected, additional dimensions. For example, the U.S. Pavilion at Knoxville Expo 82 had all of its TV monitors donated by Sony, and Apple donated all of the computers.  The touchscreen interactive exhibits throughout the pavilion won the National Audio-Visual Association’s Outstanding Achievement Award for 1982.

The U.S. Pavilion at Knoxville 82 had some other, less desirable moments. A few days before opening Knoxville experienced a major storm and our new pavilion building developed leaks.  One major leak was over the glassed-in but open-top computer room and all of the Apple computers were drenched. The computers were Apple IIC’s and our MIT programmers had insisted they be operated with their tops open; as a result, they were thoroughly soaked inside. (If memory serves, they had to operate with the tops off in any case because they were jammed full of extra cards that wouldn’t allow the top to be installed.) Those 50 or so computers ran every exhibit in the pavilion and opening was two days away with President Reagan leading the ceremony. A panicky feeling set in. But the University of Tennessee student guides immediately mobilized with hair dryers and went after the Apples. After we felt they were dried out we threw the switches and miraculously everything worked. We developed our own slogan about the experience: “Apples Float,” which the people at Apple loved.

The Donor Wall offered photo-op benefits. When I took Congressmen through our pavilions I always stopped at the donor wall and told them how the companies’ contributions made our pavilion possible. Invariably they wanted their picture taken in front of the wall.  They were especially happy to see a corporation there that was located in their state or district. The sponsors also appreciated having photos of visiting dignitaries captured against the wall, or with one of their products in the pavilion.

The ’90s: onward to tiered benefits
The number of sponsors for a pavilion can be quite large. At Aichi Expo 2005 there were 72 sponsors including a record 10 U.S. States. At Shanghai Expo 2010, there were 104 sponsors that provided over $63 million in support. At Taejon, Korea Expo 93, although Amway was the major sponsor, there were actually 45 additional sponsors.

Active in the fundraising for Taejon 93 was Commissioner General Terry McAuliffe who was recently elected Governor of Virginia. The U.S. Pavilion at Taejon which averaged 31,000 visitors a day, was the first U.S. Pavilion to be totally funded by the private sector and this was before the Congressional restrictions on the use of federal funds.

Along the way we got into tiered benefits linked to the amount donated. In today’s expo world the competition for corporate donations has gotten considerably

stiffer and the benefits packages have expanded.

At the U.S. Pavilion for Shanghai 2010, supporting corporations were given video spots on a giant outdoor screen. Corporate names appeared on sections of the pavilion, and there was a corporate exhibit area at the end of the pavilion experience.  We had had similar arrangements at Tsukuba Expo 85, Seville Expo 92,  and Taejon Expo 93. Had those benefits not been offered there would have been no U.S. Pavilion at those world expos. Anecdotal reports from the Student Ambassadors at the pavilion indicated that the Chinese visitors enjoyed the corporate gallery.

Milan 2015’s unique fundraising challenges
At Milan Expo 2015, the “Friends of the U.S. Pavilion” group will have to employ all of the techniques mentioned in this article and probably innovate more to raise $45 million in a compressed time frame. Fundraising at the past three expos was right down to the wire but nevertheless it was successful and hopefully the same will be true for Milan.

Read on for an insider look at the kinds of materials we share to attract sponsors, and some comparisons from one expo to another.

James Ogul’s next column will look at “Student Ambassadors, the Heart and Soul of a U.S. Pavilion”
In the matter of organizing a world’s fair pavilion, James Ogul is a top human resource. At such times as the United States has stepped up to participate in a world expo, from the early ‘80s to the present more often than not Ogul has been tapped to help coordinate the effort on the government side. Since retiring from the US State Department in 2011, he has remained connected to the international expo scene in an advisory and consulting role.

Global Partners: $5 Million Plus
A minimum of $5 million in a combination of cash/VIK (value in kind). The actual amount, and the ratio of cash to VIK, will vary depending upon the specific key USA National Pavilion component (“Pavilion Component”) sponsored.

In addition to category exclusivity, each Global Partner will receive a seat on the Executive Steering Committee of the USA National Pavilion and the highest level of USA National Pavilion sponsor benefits (“USAP Sponsor Benefits”), as described under “Benefits Available to All Partners and Official Suppliers” and a prominent exclusive “Presented By” credit for the specific Pavilion Component sponsored.

Premier Partners: $3 M – $4.9 M
A minimum of $3 million in a combination, to be negotiated, of cash/VIK. Premier Partners will enjoy category exclusivity, brand integration/product placement within the Pavilion,  a Premier Partner level of USAP Sponsor Benefits and a prominent exclusive “Presented By” credit for the specific Pavilion Component sponsored, which may include National Day  – Virtual Pavilion

Pavilion Partners/Official Suppliers: Under $3 Million
A contribution, to be negotiated, of cash/VIK, with  a commensurate level of USAP Sponsor Benefits and a prominent exclusive “Presented By” credit for Special Educational, Cultural or Business Events 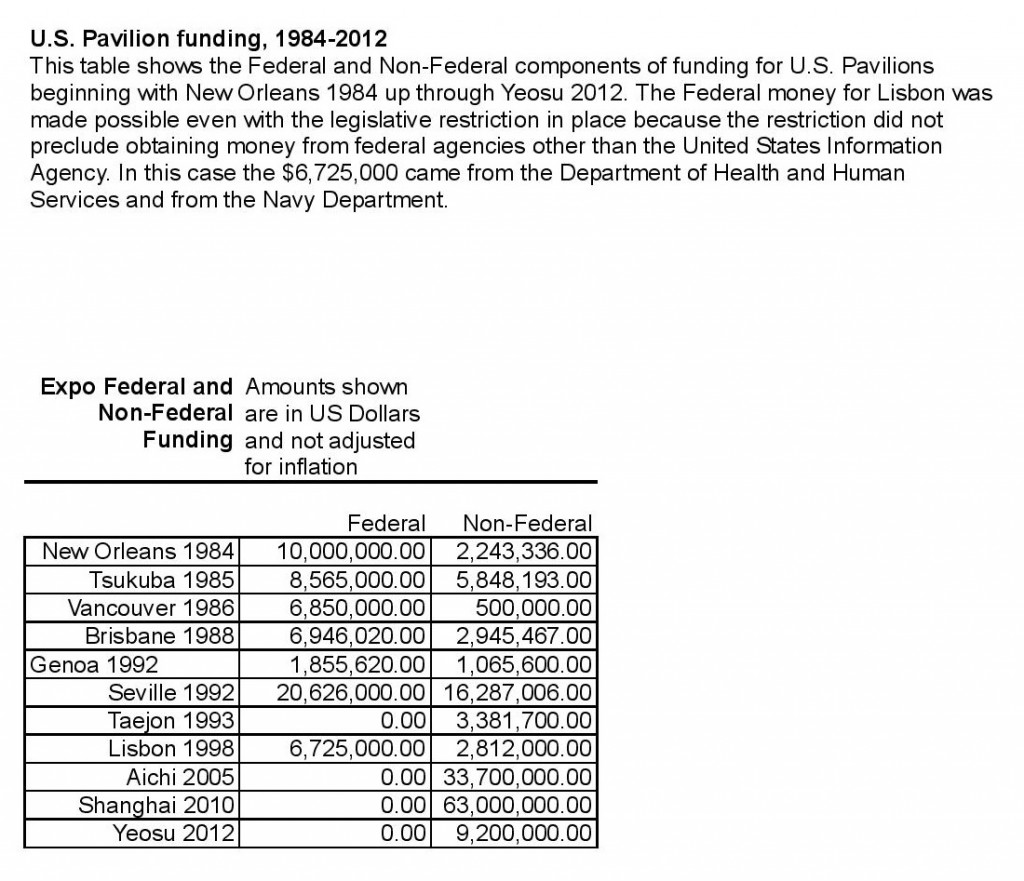 Judith Rubin
Judith Rubin ([email protected]) is a leading journalist, publicist, strategist, blogger, content marketing specialist and connector in the international attractions industry. She excels at writing about all aspects of design and technical design, production and project management. Areas of special interest include AV integration and show control, lighting design and acoustics, specialty cinema, digital video and world’s fairs. Judith has ties to numerous industry organizations. From 2005-2020 she ran communications, publications and social media for the Themed Entertainment Association (TEA). In 2013, she was honored with the TEA Service Award. She was development director of IMERSA, and co-chair of the 2014 IMERSA Summit. She was publicist for the Large Format Cinema Association in the 1990s, now part of the Giant Screen Cinema Association (GSCA) and has also contributed to the publications of PLASA, IAAPA and the International Planetarium Society. Already making her mark as a magazine and book editor, Judith joined World’s Fair magazine in 1987, which introduced her to the attractions industry. Launching as a freelancer in the mid 1990s she has contributed to dozens of publications and media outlets including Funworld, Lighting&Sound America, Sound & Communications, Urban Land, The Raconteur and The Planetarian. She joined InPark in 2010. Judith earned a Bachelor of Fine Arts from Pratt Institute. She has lived in New York City and the San Francisco Bay Area, and now makes her home in Saint Louis, where she is active in the local arts and theater community.
Share
Facebook
Twitter
Linkedin
Email
Print
WhatsApp
Pinterest
ReddIt
Tumblr
Previous articleDisney and Lightstorm Executives Are Joined by Na’vi in Groundbreaking Ceremony for AVATAR-Themed Land
Next articleEuro Attractions Show Wrap-up