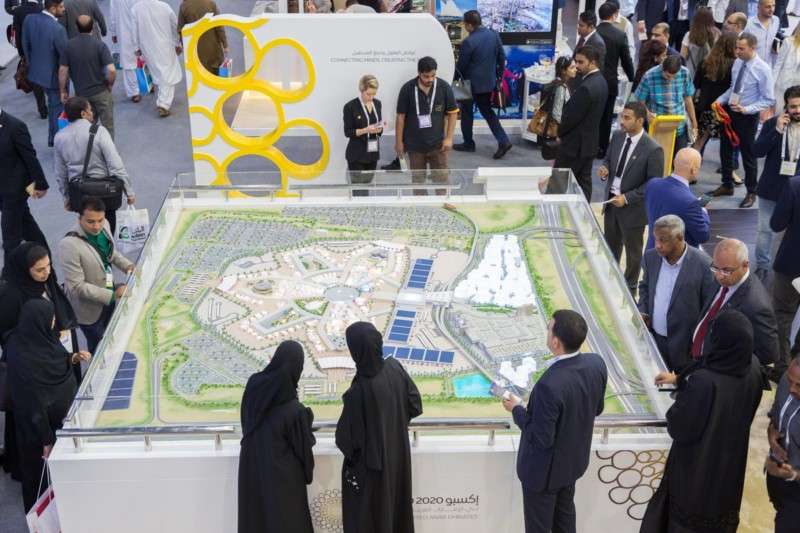 Story by James Ogul — In Astana, Kazakstan, the next world’s fair will run June 10-Sept 10, 2017, following some five years of preparation. Its theme is “Future Energy.” This mega-event (officially an International Specialized Expo as designated by the Bureau of International Expositions, or BIE; more colloquially known as a world’s fair) also celebrates the 25th anniversary of the young republic of Kazakhstan.

Photo at top: Dubai Expo 2020 on display at a local business event in April 2017

At this writing, 115 participating countries were hard at work finishing installation of their exhibitions. Several have released conceptual design renderings as well as construction photos.

On April 25 Nussli, a specialist in temporary structures for sporting, cultural and business events, announced completing the main portion of China’s pavilion (the company is also engaged on Astana pavilions for UK, Shell, Air Astana, and the Vatican). The Chinese Government has indicated that President Xi Jinping will attend the Expo, and Swiss President Doris Leutard will also attend. As there is a long-standing tradition of Heads of State visiting Expos (29 Heads of State visited Milan Expo 2015) there will likely be several more such announcements.

As announced by Kazakhstan President Nazarbayev, the Expo 2017 site is intended to be permanent, with plans to reopen as the Astana International Financial Center (AIFC). The official launch date for the AIFC is January 1, 2018. It is being modeled on Dubai’s financial center. The National Bank and the Kazakhstan Stock Exchange will relocate to the AIFC from Almaty. 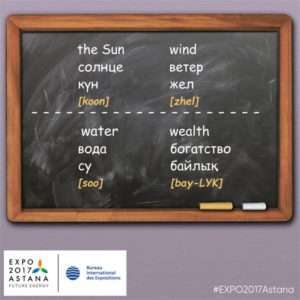 Expo 2020 Dubai
World’s fairs come in two sizes and durations. Astana 2017, a Specialized Expo, is the smaller, running for three months; Dubai Expo 2020 is the larger “World Expo,” and will run for six months – October 10, 2020 – April 10, 2021, with the theme of “Connecting Minds, Creating the Future.” (The BIE recently applied the “Specialized” and “World” designations in place of its former “Recognized” and “Registered” terminology for the two event categories.)

Dubai 2020 is moving along rapidly. Heavy onsite construction is taking place. Luxembourg, Italy, Greece, France, Monaco, Indonesia, Switzerland, Slovenia, New Zealand, the UK, and The Netherlands have already committed to participate and ultimately 100 nations are expected to sign up.

Metaform Architects recently released the conceptual design of Luxembourg’s free-standing pavilion. At a larger-scale world’s fair with the World Expo designation, such as Dubai 2020, most participating countries are expected to design and construct their own pavilion buildings, as opposed to creating their exhibits in Expo-provided buildings as is the case with the smaller Specialized Expos, such as Astana 2017. This requires longer lead times to complete projects.

In addition to national participants, Dubai has so far signed agreements with six Official Partners. A special Expo 2020 metro line is under construction to bring visitors to the site. The Dubai organizers expect 70% of the audience to come from overseas, which is a unique attendance model.

Specialized Expo 2022/23
Specialized Expos are scheduled in between the larger World Expos, which are held every five years. Following Astana 2017, the next calendar slot for an International Specialized Exposition is 2022/23. Minnesota (U.S.), Lodz (Poland) and Buenos Aires (Argentina) are competing. The BIE has just completed inquiry missions to each. Next, each project will be presented to the General Assembly of the BIE on 14 June 2017. The host country will be selected by the 169 Member States of the BIE at the subsequent General Assembly in November 2017.

One factor influencing Minnesota’s chances is that BIE members get first priority and the U.S. allowed its membership to lapse some years ago; however on 4 May 2017, Congress authorized the U.S. State Department to re-join the BIE and it appears that the process may soon be complete. (The U.S. has not hosted a world’s fair since the Louisiana World Exposition in 1984.)

World Expo 2025
As mentioned above, World Expos occur on a five-year cycle. They have broad themes intended to raise awareness of and find responses to universal challenges of our time. Following Dubai 2020, there are bids for the 2025 World Expo slot from four countries: France, Japan, Russia and Azerbaijan. Both France and Japan have notable history as world’s fair hosts and participants.

The French proposal outlines an event running May 1 – October 30, 2025, in the Normandy region, with the theme, “Sharing our Knowledge, Caring for our Planet.”

On April 24, 2017, Japan submitted the Osaka 2025 bid, with the theme, “Designing Future Society for Our Lives,” and proposed dates of May 3-November 3. Osaka previously hosted a successful world’s fair in 1970. Osaka ’70 is on record as the second most-attended in world’s fair history with over 64 million visitors. (In 1990, Osaka also hosted the International Garden and Greenery Exposition, worth noting because it was an international horticultural event also overseen by the BIE, and as such had many characteristics of a world’s fair – see Beijing 2019 item, below.)

Next will come the examination phase, which will include the submission of bid dossiers, BIE Inquiry Missions, presentations, and forums. The 168 Member States of the BIE will elect the host country when the 164th General Assembly of the Organization meets in November 2018.

Beijing 2019 Horticultural Event
The 2019 Horticultural Expo will be held in Yanqing District in Beijing from April 29 through October 7, 2019. The Expo theme is “Live Green, Live Better.” Expo 2019 comes under the auspices of both the BIE and the Association of Horticultural Producers (AIPH). Organizers are expecting over 16 million visitors and hope to attract 100 official participants (countries and international organizations as well as 100 non-official participants).

The BIE and the Shanghai Municipal People’s Government announced the opening of the 46,500-square meter World Expo Museum on Monday, 1 May 2017. Located on the World Expo 2010 Shanghai site, the museum presents the history of International Expos since 1851 is told in eight different sections. It is open on a trial run, with 4,000 tickets each day. The official inauguration ceremony will be in July 2017.