The Land of Legends meets Masha and the Bear 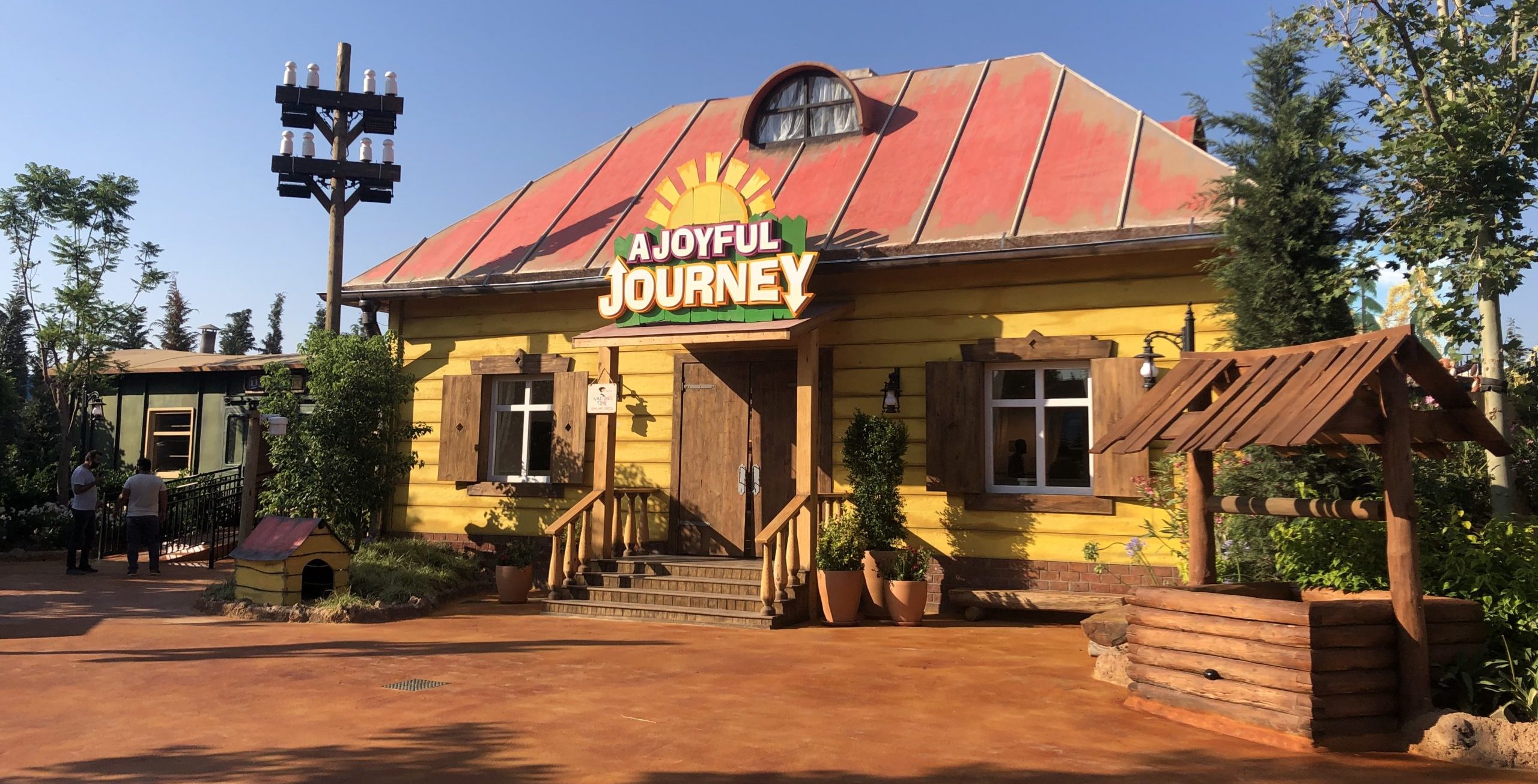 The Land of Legends resort in Antalya, Turkey has been attracting guests to its theme park, waterpark, shopping and hotel since it opened in 2016. The park is owned by Rixos Group, a luxury resort operator based in Turkey. According to Hande Tezerdi, Business Development Director for The Land of Legends, over one million guests visited the resort in 2019 and the park expected nearly two million guests in 2020, prior to the pandemic. The resort features both waterpark attractions as well as a section of theme-park-style dry rides. It includes a shopping district, an on-site themed hotel, an evening spectacular created by Franco Dragone and plenty of room for expansion [See “Turkish Splash,” InPark Magazine issue #64 (2016) and “Defining Polin,” InPark Magazine issue #74 (2018)].

For 2020, the park assembled an international team of experts to help create two new themed areas and two new water rides. Masha and the Bear Land of Laughter is the heart of the new additions – a themed land based on the popular animated Russian TV series. Masha and the Bear follows the adventures of a young girl and her friend Bear, who has a knack for keeping her out of trouble as she interacts with the other animals in the forest. Loosely based on a Russian folk tale, the show has been around since 2009. The cartoon is lighthearted and features a positive lesson in episodes for young viewers.

The centerpiece of Land of Laughter is A Joyful Journey, a slow-moving boat ride through the four seasons with Masha and the Bear. Guests enter Masha’s house before boarding boats that take them in and out of a show building. Indoor and outdoor scenes rely on sets, animatronics, media, UV lighting, sound effects, music and projections to bring the four seasons to life. Most of the scenes show Masha interacting with the seasonal weather conditions and also holidays like Halloween, Christmas and New Year’s. Over 75 figurines populate the attraction, both static and animated. While the ride is inspired by the Masha and the Bear TV series the storyline is unique to The Land of Legends.

An indoor play structure called Bear’s Funhouse and a splashpad play area provide other attractions within the land. A quick service restaurant features Russian cuisine while the train-themed Food Station restaurant provides indoor and outdoor sit-down options. Windows on one side of the train face the land while “windows” on the opposite side are actually screens that show animated scenes and characters from the TV series.

Connecting the Land of Laughter to the rest of the park is the second new land: Forest Carnival, providing a thematic transition to the rest of the park. The Carnival area took three existing rides from elsewhere in the park (a kiddie coaster and two flat rides) and rethemed them to the Carnival motif. A series of games and a new small live-show theater round out the land’s offerings.

While the Land of Laughter and Forest Carnival opened on July 23, 2020, the park also opened the new WaterMania attraction a few weeks prior. WaterMania is a splash-battle style boat ride with a steampunk theme. Guests on the ride shoot water cannons at targets throughout the ride and at guests on land, who are equipped with their own water cannons and devices intended to get everyone refreshingly wet. The ride replaces a ropes course attraction and is adjacent to the two new areas of the park.

Even before the pandemic hit, The Land of Legends had an aggressive schedule in mind for the new attractions. Ahmet Colakoglu, Director of Construction for Rixos Group, oversaw the construction of the new attractions. He worked alongside Hande Tezerdi to manage the design, development, installation and promotion of the park additions. The new capital consists of two boat rides from Mack Rides: their Interactive Boat Ride and a slow moving 16-passenger boat system. Both were purchased in the fall of 2019 and Colakoglu planned for them to open in May 2020.

Separately, Tezerdi began work on acquiring IP to accompany the new land. “80% of our visitors come from Russia, the CIS (Commonwealth of Independent States) and MENA (Middle East & North Africa),” explains Tezerdi. “That is why it made sense to work with Masha and the Bear – a major brand from Russia that is also extremely popular here in Turkey and in the Middle East.”

Prior to Rixos, Tezerdi worked for a major studio and had experience dealing with entertainment brands. “I reached out to Animaccord Animation Studio (the IP holder) and though they had licensed the brand extensively, they had not worked with any theme parks. I explained the concept to them and they loved it,” says Tezerdi.

At the same time, The Land of Legends was working with Germany-based MackNeXT, a sister company to Mack Rides, to develop the attractions. They brought on Independent Creative Consultant Chris Lange to lead the project in the fall of 2019 and develop the creative concept packages with his team in Berlin.

Lange worked directly with Tezerdi and Colakoglu making decisions for the attractions, which helped to expedite the project. “We developed two goals: to create a longer ride experience for guests, and to create a story-driven immersive experience,” says Lange.

The team began working in earnest on the project in December 2019 and by March 2020 most of the concrete had been poured for the rides and lands. By mid-March the pandemic effects had made their way to Turkey with travel restrictions going into place, effectively stopping all travel from outside the country to the park.

Colakoglu approached Rixos’ board and investors with several options: stop construction temporarily, proceed with added safety measures or postpone the expansion for one or two years. The board opted to move forward cautiously with the additional safety precautions. Everyone was anxious to have good news and a positive story for the park, region and industry. Additionally, with so many projects suddenly stopped or on hold, they also hoped to negotiate with vendors for additional savings. According to Colakoglu, the project was completed for roughly 10-15% below initial budget projections.

Instead of a site’s usual single health supervisor, Colakoglu hired three and installed temperature-detecting cameras for workers. Even though the Antalya region only had a relatively small number of cases, masks were required for workers, social distancing was enforced when possible and government regulations were followed. Throughout the construction there were no reported cases of COVID-19.

Even with a site plan in place, the park had to work around the travel restrictions and supply chain interruptions. That meant Mack Rides would not be able to send a supervisor and team to oversee the installation of the boat rides. Since they were relatively straightforward ride systems, The Land of Legends utilized their own install team. Mack Rides created detailed documentation and instructions for the local workers to install both attractions. Once travel restrictions were lifted, Mack was able to send an inspector to check the installation and formally turn the rides over to The Land of Legends.

On the show production side, Lange and the Mycotoo team participated in daily teleconference calls and relied on WhatsApp to field questions from the site immediately. The local team captured and sent hundreds of photos from the site. When it came time for finishing, workers would complete a small section, send photos, get feedback and then finish the work.

Similarly, under normal circumstances an art director would have traveled to the MK Themed Attractions production facilities in the Philippines to approve the figurine characters during fabrication. For the Masha and the Bear project, MK sent videos and photos to the design team for review and approval before shipping the figures to the park.

“It was critical to have our team and the local workers on-site in sync,” says Arca. “The Land of Legends leadership stressed the importance of art direction for the project, which prompted the local team to rely on the creative team for guidance in the work they were executing. It was a great blending of our expertise with the knowledge and skills from the on-site team. We became an incredibly united front that overcame the challenges of the pandemic, despite the physical distances.”

A new model of project management

Now that travel restrictions are beginning to be lifted, Masha and the Bear Land of Laughter seems likely to offer an enduring, contemporary model of project management. “I don’t think we will entirely return to the old way we knew before,” claims Colakoglu. “I expect that some of  the on-site approvals will likely change to virtual, but not all. Daily teleconferences are time consuming, so there is a balance somewhere.”

On the creative production side, Lange agrees it will be a mix of the old and new ways. “There are trade-offs to handling things virtually,” he says. “Checking one theatrical light placement might take an hour between the lighting designer and the onsite team trading photos and corrections back and forth. In person it could be checked in about 10 seconds.”

Lange also foresees a continued trend of using local vendors whenever possible. “Having localized production potentially insulates you from possible supply chain problems. I see that continuing to happen in the future.”

For example, The Joyful Journey’s artificial trees needed fabricated leaves. Lange says he typically would source that from a company in Europe. Instead, the team contracted with a Turkish fabricator who researched how to create the leaves and produced them.

Regardless of the project management methodology, it’s clear that The Land of Legends intends to continue growing and enticing visitors to return.

“Our sales team is already seeing reservations pick up,” says Tezerdi. “We rely heavily on tour operators in this region, so that has been challenging with travel restrictions. Now that things are starting to open up, we are optimistic.”

Lange also sees a bright future for the resort, in part thanks to the new additions. “These attractions and lands were designed to extend the dwell time for guests in the park, as well as provide guests with stories and characters that they recognize,” says Lange. “In some respects, The Land of Legends has been a bit of  a hidden gem and I’m excited to see them raise their profile in the industry and the marketplace by promoting and expanding their beautiful resort.” • • •