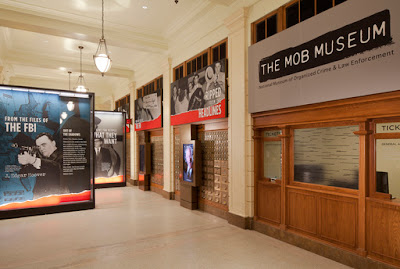 Las Vegas, NV, USA /PRNewswire/ — The Mob Museum, the National Museum of Organized Crime and Law Enforcement, opened to the public on February 14 in downtown Las Vegas on the 83rd anniversary of the Chicago St. Valentine’s Day Massacre – considered by many as the most notorious hit in Mob history. One of the Museum’s iconic artifacts is the brick wall against which the members of the Bugs Moran gang were lined up and shot and killed by members of Al Capone’s gang.

“The Mob Museum is a world-class destination created by a team of researchers and creative experts who are the best in their respective fields,” said Jonathan Ullman, executive director of The Mob Museum. “The end result is a modern and contemporary look at a subject that continues to fascinate the world. And it’s a story that has no end because organized crime continues to evolve and impact our global economy even today.”

According to Ellen Knowlton, former FBI Special Agent in Charge, Las Vegas Division, and a 24-year FBI veteran who now heads The Mob Museum’s non-profit board of directors, The Mob Museum is one of the most unique museums in the country. “Our goal is to accurately tell the stories of organized crime and how it shaped our country. The Museum also celebrates the victories of law enforcement and gives visitors insider access to wiretaps and other information uncovered through sophisticated surveillance and sting operations. It’s highly interactive and clearly educational.”

The grand opening kicked off with an early morning mass wedding and vow renewal ceremony in The Mob Museum’s historic courtroom – the same courtroom where one of the 14 Kefauver nationwide hearings took place in 1950 to expose organized crime. Seven couples from throughout the country were randomly drawn via a national “Married at The Mob Museum” promotion. The ceremony was officiated by Oscar B. Goodman, former Las Vegas Mayor and once the Mob’s go-to defense attorney. Goodman, who now serves on the Museum’s board of directors and is one of the Museum’s original visionaries, received his ministerial ordination expressly for this historic event.

Following the wedding, representatives of The Mob Museum, its world-class creative team, city of Las Vegas officials and members of the Museum’s board of directors led a ribbon-cutting ceremony that included a performance by The Jersey Boys, vintage police cars, flappers and a Gin bottle-breaking on Prohibition-style barrels.

The Mob Museum is housed in the former federal courthouse and U.S. Post Office built in 1933 during the Hoover administration. Carefully and meticulously rehabilitated to house The Museum, the building is listed on the National Register of Historic Places and is considered the Museum’s ultimate artifact.

“If these walls could talk,” said Goodman of the nearly 80-year-old building where he once defended the likes of Anthony Spilotro, Meyer Lansky and Frank “Lefty” Rosenthal. In service as a federal courthouse and post office for more than 70 years, the neo-classical building is at the center of many fond memories for a number of Southern Nevadans whose families are considered pioneers and founders of modern-day Las Vegas.

Designed by the same creative team credited with the Rock and Roll Hall of Fame in Cleveland and the International Spy Museum in Washington, D.C., The Mob Museum adopts a contemporary style to story-telling approach via engaging exhibits and multi-sensory experiences. The Mob Museum puts the visitor in the middle of the action through high-tech theater presentations, iconic one-of-a-kind artifacts and interactive, themed environments. Visitors can shoot a Tommy Gun simulator, listen in on actual wiretaps and be part of a police line-up.

The Museum also worked with the FBI and many famous undercover agents who made a career of fighting the Mob, including legendary agents Joe Pistone who infiltrated the Mob posing as a small-time jewel thief Donnie Brasco; and Cuban-born Jack Garcia who successfully ingrained himself into the Gambino family.

ABOUT THE MOB MUSEUM
The Mob Museum is a world-class destination in downtown Las Vegas dedicated to the thrilling story of organized crime and law enforcement. It presents an exciting and authentic view of the Mob’s impact on Las Vegas history and its unique imprint on the world. True stories of Mob history are brought to life in a bold and contemporary style via engaging exhibits, high-tech theater presentations and more than 600 artifacts, the broadest collection of Mob and related law enforcement memorabilia under one roof. www.themobmuseum.org.

Joe Kleimanhttp://wwww.themedreality.com
Raised in San Diego on theme parks, zoos, and IMAX films, InPark's Senior Correspondent Joe Kleiman would expand his childhood loves into two decades as a projectionist and theater director within the giant screen industry. In addition to his work in commercial and museum operations, Joe has volunteered his time to animal husbandry at leading facilities in California and Texas and has played a leading management role for a number of performing arts companies. Joe previously served as News Editor and has remained a contributing author to InPark Magazine since 2011. HIs writing has also appeared in Sound & Communications, LF Examiner, Jim Hill Media, The Planetarian, Behind the Thrills, and MiceChat His blog, ThemedReality.com takes an unconventional look at the attractions industry. Follow on twitter @ThemesRenewed Joe lives in Sacramento, California with his wife, dog, and a ghost.
Share
Facebook
Twitter
Linkedin
Email
Print
WhatsApp
Pinterest
ReddIt
Tumblr
Previous articleJohn Deere Pavilion Brings New Experiences with Reimagined Exhibits
Next article3net Releases Comprehensive Shooting Guide for 3D Monitors and Displays