The Rising Tide of Waterpark Attendance 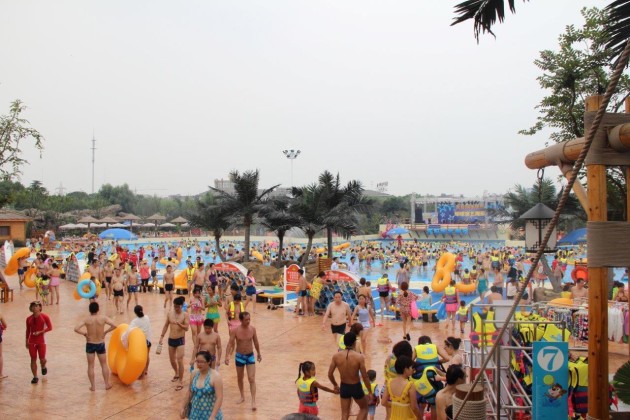 Brian Sands will speak at the 2015 World Waterpark Association show in Palm Springs, with co-presenter David Sangree, President of Hotel and Leisure Advisors. The presentation will include detail on Chimelong Waterpark, and an exploration of the “Hotel Keys” information included below.

While attendance at the top water parks worldwide remains significantly lower than at the top theme parks worldwide, attendance at these water parks continues to grow much more rapidly. This combined with their generally much lower development costs and higher operating margins, makes them a smart choice in many cases for developers, investors, and operators worldwide. Like their larger brethren theme parks, water parks will also continue to benefit from improvements in technology that create ever more exciting experiences, while at the same time water parks also offer the opportunity for visitors to enjoy activities that may also be just as entertaining and even more relaxing, such as sea life interaction, live entertainment shows, and spa treatments. These characteristics will enable water parks to continue to grow their attendance rapidly in the coming years, and to support a wide variety of associated lodging products.

The pattern of growth in the global water park industry reveals particularly strong increases at parks in Asia and Latin America, as described in the TEA/AECOM 2014 Theme and Museum Index – Global Attractions Attendance Report. The report, published annually by the Themed Entertainment Association (TEA) and the Economics practice at AECOM, is the definitive annual attendance study for the themed entertainment and museum industries, and distributed online free of charge by both organizations. (The 2015 edition will be published in spring 2016.)

Growth in all regions, with Asia in the lead

According to the 2014 Theme Index, attendance at the top 20 water parks worldwide increased by nearly 3 percent in 2014, rising to 27.6 million. At a regional level, the leader was Asia with nine of the top 20 water parks worldwide and attendance of nearly 12 million, accounting for 43 percent of attendance worldwide. For the second year, Chimelong Waterpark in Guangzhou, China had the highest attendance worldwide with almost 2.3 million visitors. By heating its pools for the first time in 2014, Chimelong Waterpark extended its operating season by a month at each end, and grew its attendance by 4 percent.

Also in Asia, Shenyang Royal Ocean Park Water World in Fushun, China, grew by over 6 percent and reached 13th on the list worldwide. Elsewhere in Asia, attendance at many parks declined – in South Korea (which has four of the top 20 water parks worldwide) this was due to the tragic MV Sewol ferry disaster, and elsewhere in the region was largely driven by poor weather.

North America had five of the top 20 water parks worldwide, with attendance of over 8 million in 2014, accounting for 29 percent of attendance worldwide. Disney’s Blizzard Beach Water Park at Walt Disney World Resort in Orlando rose to over 2 million attendees, placing it in third position globally just behind its sister park Disney’s Typhoon Lagoon, which rose to nearly 2.2 million. Both parks benefited from the continued increase in overnight tourists to the Orlando area, a product of the continued positive trends in the national economy and international tourism.

Exhibiting remarkable growth, Latin America had four of the top 20 water parks worldwide, with attendance of over 5 million in 2014, accounting for 19 percent of attendance worldwide. Thermas dos Laranjais exhibited the strongest growth of any water park worldwide, rising to fourth place globally with over 1.9 million attendees. Two other Latin American parks, Hot Park Rio Quente in Brazil and Piscilago in Colombia, had attendance over 1 million.

Although the study in one form or another has been in existence for much longer, TEA and the Economics practice at AECOM first jointly published the Theme Index in 2008, which included attendance figures at parks worldwide for 2007, including the first list of top 20 water parks worldwide. Attendance was 19.4 million at the top 20 water parks in 2007, which means that attendance at the top 20 parks has increased by over 8 million in the seven years to 2014, a 43 percent increase. This equates to a compound annual growth rate of 5.2 percent, which is significantly higher than the Gross World Product (GWP) of around 3 percent annually during this period, underscoring the resilience of the leisure industry, even during a time as challenging as the Great Recession.

Also note that by comparison, attendance at the top 20 theme parks worldwide grew from 167.8 million in 2007 to 200.6 million 2014, an increase of 32.9 million. As large as that figure is in nominal terms, it equates to only 16 percent, which is about one-third the increase in attendance that occurred over this period at the top 20 water parks globally.

Some other telling figures that paint a picture of where the growth is:
In 2007…

–already eight were in Asia (compared to nine in 2014)

–nine remained on the list in 2014, including Chimelong Waterpark, Typhoon Lagoon, and Blizzard Beach, which were all in the top three in both years (though their positions changed somewhat)

–attendance at the nine parks on both lists grew from just under 12 million in 2007 to over 14 million in 2014, an increase of nearly 19 percent 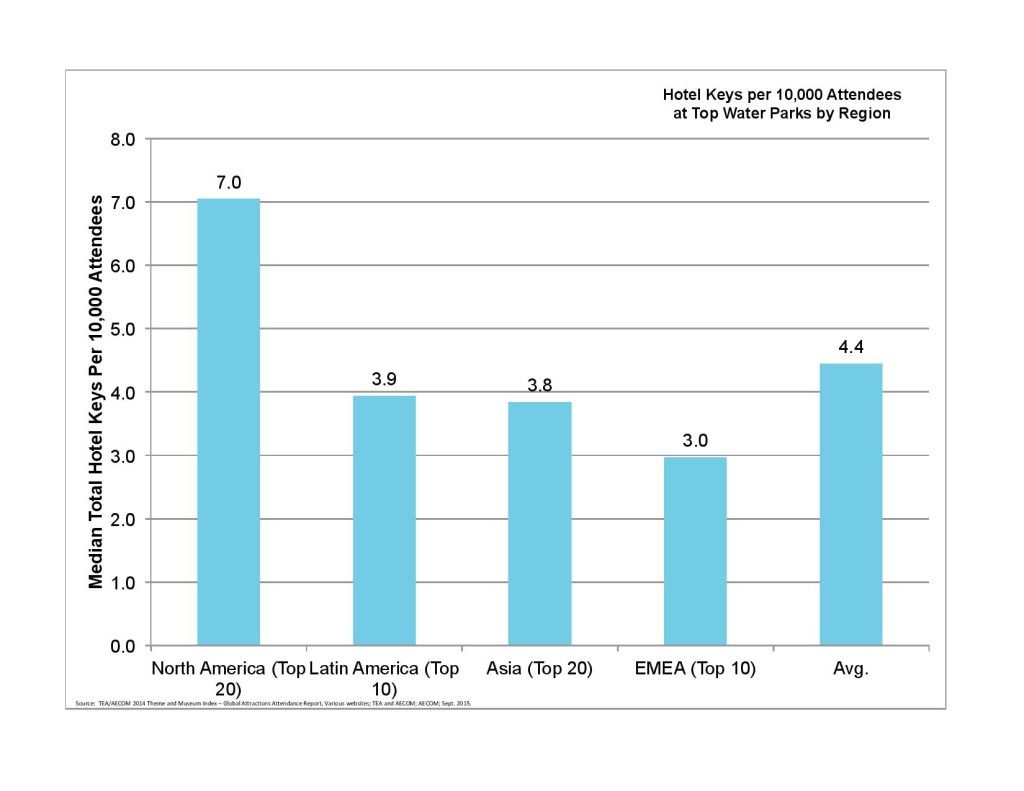 It is useful to analyze the relationship between attendance at a park (or a collection of associated parks) and hotels which are likely to have a significant portion of their demand driven by the park (or parks). The Economics practice at AECOM frequently analyzes not only attendance potential at new, expanding, or repositioning theme parks and water parks, but also what such attendance is likely to create in terms of additional demand for hotels, retail-dining-entertainment (RDE), and other uses.

Recently, AECOM evaluated the relationship between hotel keys per 10,000 attendees at all of the theme parks and water parks contained in the Theme Index. The analysis is relatively complex, with a number of key methodological steps necessary:

–Total attendance must be considered, which includes 2014 attendance at the individual parks included in the Theme Index lists, as well as any associated parks that also make a Theme Index list. For example, for the Magic Kingdom, also included would be attendance at other Walt Disney World Resort attractions, specifically EPCOT, Disney’s Animal Kingdom, Disney’s Hollywood Studios, Typhoon Lagoon, and Blizzard Beach.

–For global destination parks/resorts (e.g., Walt Disney World Resort, Universal Resort), Nearby Hotels also includes those hotels that are located on the operator’s resort grounds, even if not within 1.0 mile of the selected attraction.

Whatever manner in which the figures are examined, the variations in the relationship are wide, whether between park types (theme or water), between or within regions, or on an individual park, median, or average basis.

–At the regional level, the figures were notably higher at water parks, where on a regional basis, the median value for the number of total hotel keys per 10,000 attendees varied from a low of 3.0 in EMEA to a high of 7.0 in North America. Average figures were even higher, pulled up by values at parks with much higher numbers of hotels in the area.

–The range in values at the individual water parks level is remarkable, with figures ranging from zero at many water parks (suggesting a missed opportunity), and rising up to 108.6 keys per 10,000 water park attendees which likely indicates additional factors besides the water park or other attractions driving demand (e.g., a nearby beach and/or urban area). 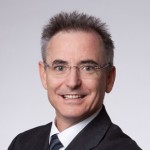 Joe Kleimanhttp://wwww.themedreality.com
Raised in San Diego on theme parks, zoos, and IMAX films, InPark's Senior Correspondent Joe Kleiman would expand his childhood loves into two decades as a projectionist and theater director within the giant screen industry. In addition to his work in commercial and museum operations, Joe has volunteered his time to animal husbandry at leading facilities in California and Texas and has played a leading management role for a number of performing arts companies. Joe previously served as News Editor and has remained a contributing author to InPark Magazine since 2011. HIs writing has also appeared in Sound & Communications, LF Examiner, Jim Hill Media, The Planetarian, Behind the Thrills, and MiceChat His blog, ThemedReality.com takes an unconventional look at the attractions industry. Follow on twitter @ThemesRenewed Joe lives in Sacramento, California with his wife, dog, and a ghost.
Share
Facebook
Twitter
Linkedin
Email
Print
WhatsApp
Pinterest
ReddIt
Tumblr
Previous articleGood Design Habitats
Next articleWaterparks: What Does the Future Hold?