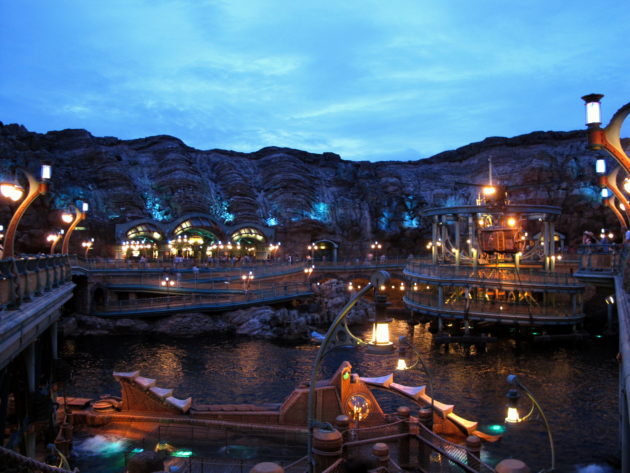 [quote]There were numerous countries that recorded year-on-year increases for Japanese visitors, including Taiwan, Hong Kong and the USA.[/quote]

[dropcap color=”#888″ type=”square”]W[/dropcap]hat countries rank at the top for inbound and outbound tourism for Japan?

Japan is one of the top tourist destinations in Asia. In fact, the Japan National Tourism Organization (JNTO) reported in 2016 that for the first time in 45 years, the number of incoming travelers surpassed the outbound figure.

Theme parks are extremely popular in Japan, not just with tourists but also with the locals. In fact, Japan has been rated the top theme park destination in Asia. In 2014, the top three most visited theme parks in the region were Tokyo Disneyland (17.3 million visitors), Tokyo Disney Sea (14.1 million), and Universal Studios, Japan (11.8 million). In a distant fourth place was Hong Kong’s Ocean Park with 7.79 million visitors in the same year. [Source: 2014 TEA/AECOM Theme Index.] 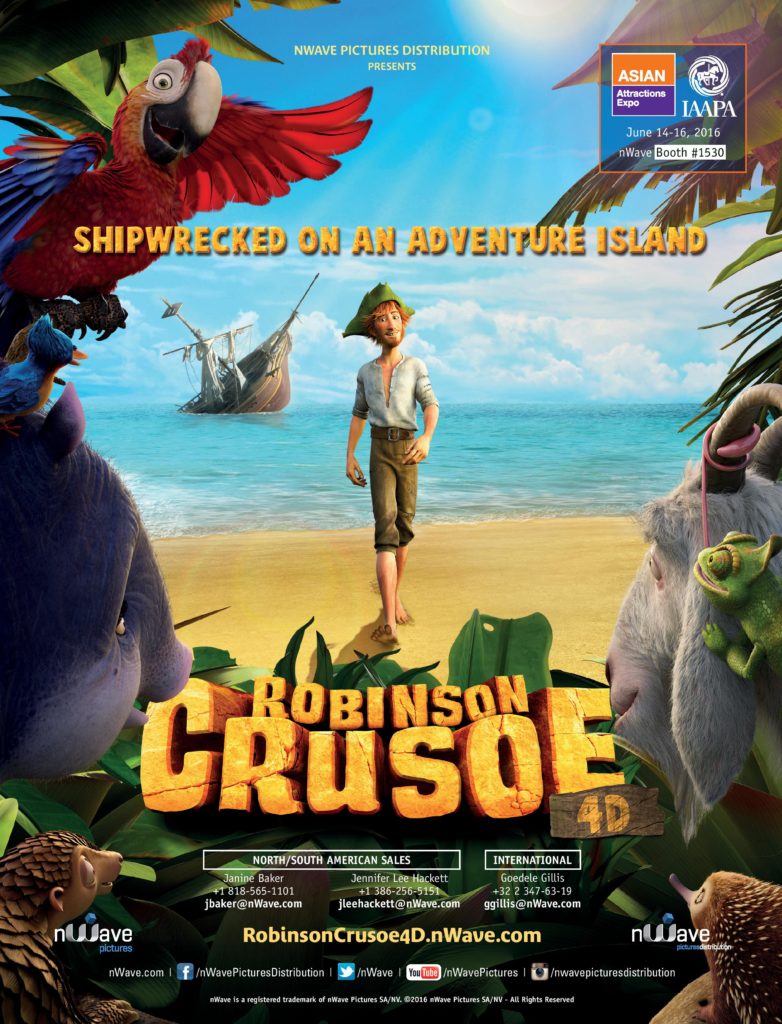 In 2015, Japan had a record number of international visitors, reaching over 19.7 million (+47.1% from 2014). This is recorded as the highest growth rate since 1964, when JNTO first began collecting data. The Japanese government set a target of 20 million foreign visitors in a year by 2020, but with this momentum, they are on course to not just achieve but surpass it completely. This success has sparked the government to consider revising the target upward.

For the first time, China became the country with the most tourists visiting Japan, with nearly 5 million visitors (+107.3%), occupying one-quarter of the market share. This growth can be explained by a number of factors. The rapidly burgeoning Chinese middle-class is one, and the depreciation of the value of the Yen is another. The Chinese were also by far the biggest spenders, accounting for 40.8% of the ¥3.5 trillion spent in 2015. So much so that the term bakugai (meaning explosive buying) has been coined to describe the shopping sprees of Chinese tourists. 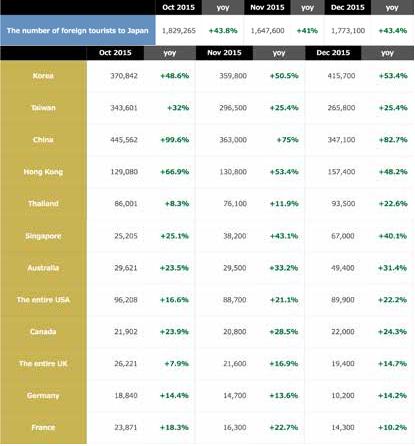 See Figure 1 for some inbound travel statistics for the fourth quarter of 2015. Although China is the top ranking country here in terms of tourists in Japan, when you factor in population size, there’s clearly still a lot of potential for growth. For example, Hong Kong and Taiwan are both considerably smaller than China, but send proportionally far more tourists to Japan than China does. With this high potential for growth, Japan can expect a lot more inbound tourism from Chinese visitors in the future Outbound:

However, this is not to say Japanese people stopped traveling. There were numerous countries that recorded year-on-year increases for Japanese visitors, including Taiwan, Hong Kong and the USA.

The month with the highest number of outbound travelers in 2015 was August, with 1.62 million. August is the peak travel season in Japan, with March ranking second. Among Asian destinations, Taiwan, Hong Kong, Vietnam and Macao all saw an increase in December compared to the previous year. Among resort destinations, Hawaii recorded 130,448 visitors in December (+3.8%) compared to 2014 and has increased for three consecutive months. 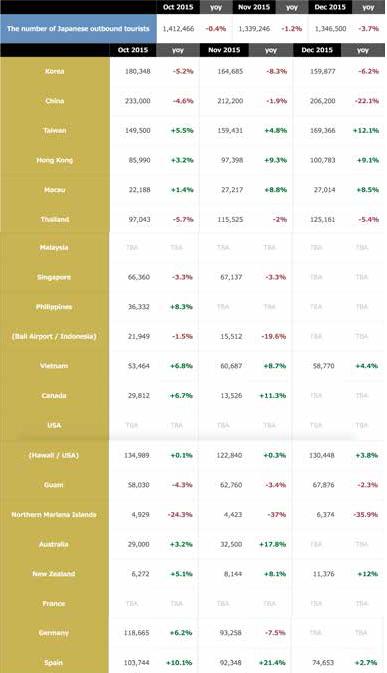 Figure 2 shows some outbound travel statistics for the fourth quarter of 2015. Although overall outbound numbers are down, various countries recorded year-on-year increases. On top of being an effect of the weak Japanese Yen, these changes could be a hint for the evolving tastes of Japanese travelers. 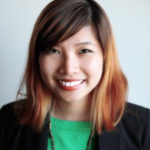 Kristie Wong ([email protected]) is marketing lead at btrax, a consulting business specializing in Asian market entry and rapid growth for top brands. The original version of this article appeared on btrax.com and is reprinted with permission.

Joe Kleimanhttp://wwww.themedreality.com
Raised in San Diego on theme parks, zoos, and IMAX films, InPark's Senior Correspondent Joe Kleiman would expand his childhood loves into two decades as a projectionist and theater director within the giant screen industry. In addition to his work in commercial and museum operations, Joe has volunteered his time to animal husbandry at leading facilities in California and Texas and has played a leading management role for a number of performing arts companies. Joe previously served as News Editor and has remained a contributing author to InPark Magazine since 2011. HIs writing has also appeared in Sound & Communications, LF Examiner, Jim Hill Media, The Planetarian, Behind the Thrills, and MiceChat His blog, ThemedReality.com takes an unconventional look at the attractions industry. Follow on twitter @ThemesRenewed Joe lives in Sacramento, California with his wife, dog, and a ghost.
Share
Facebook
Twitter
Linkedin
Email
Print
WhatsApp
Pinterest
ReddIt
Tumblr
Previous articleWaterparks Thrive Where It’s Hot
Next articleLand of the Lions