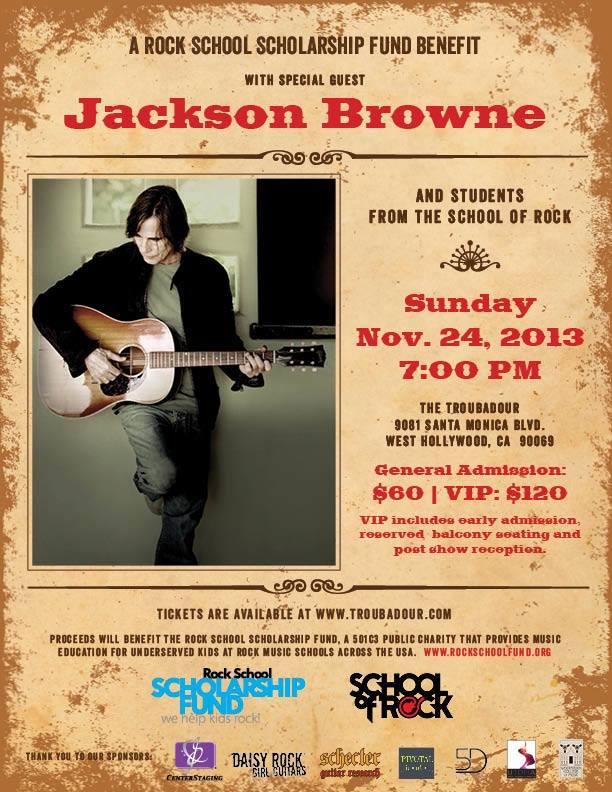 Los Angeles, CA, USA — The Rock School Scholarship Fund announced a benefit concert with special guest, singer-songwriter Jackson Browne.  The event takes place at legendary club, The Troubadour at 7:00 PM on Sunday, November 24th in West Hollywood and benefits The Rock School Scholarship Fund (RSSF), a 501c3 public charity. Students from the School of Rock West LA and Burbank will perform, and for several songs will be joined by singer-songwriter Jackson Browne. Limited VIP tickets, which include early admission, balcony seating and reception, are available for $120 and general admission tickets are $60. All proceeds go to RSSF.  Tickets are available at: http://www.troubadour.com/event/407961

Scholarship Fund in 2010. Years of working in private music education helped them realize how out of reach music lessons were for most families. The Rock School Scholarship Fund is the first non-profit that provides funds for kids to attend any rock music school in the U.S.  The Fund provides instruments and scholarship funding to cover tuition expenses based on a student’s financial need combined with their desire to actively and passionately participate in a rock school program. Wendy Winks, Executive Director and Co-Founder of RSSF, envisions the day when they can “serve thousands of kids and hundreds of schools.”  And in order to do that, RSSF continues to work with musicians, music companies and people who love music to raise funds for deserving kids in need.

“Jackson Browne is an inspiration to the students,” said co-founder Wendy Winks. “We are honored to have his support for this benefit concert.”  Co-founder Carl Restivo adds, “The students from the School Of Rock are excited beyond belief!  The show will include some ofJackson Browne’s greatest hits and a few surprise numbers as well. ”

Jackson Browne has written and performed some of the most literate and moving songs in popular music and has defined a genre of songwriting charged with honesty, emotion and personal politics. He was honored with induction into the Rock and Roll Hall of Fame in 2004, and the Songwriter’s Hall of Fame in 2007. Beyond his music, he is known for his advocacy on behalf of the environment, human rights, and arts education. He’s a co-founder of the groups Musicians United for Safe Energy (MUSE), Nukefree.org, and the Success Through the Arts Foundation, which provides education opportunities for students in South Los Angeles.

More information about the Rock Scholarship Fund, whose mission is to “Help Kids Rock,” can be found at www.rockschoolfund.org.

Joe Kleimanhttp://wwww.themedreality.com
Raised in San Diego on theme parks, zoos, and IMAX films, InPark's Senior Correspondent Joe Kleiman would expand his childhood loves into two decades as a projectionist and theater director within the giant screen industry. In addition to his work in commercial and museum operations, Joe has volunteered his time to animal husbandry at leading facilities in California and Texas and has played a leading management role for a number of performing arts companies. Joe previously served as News Editor and has remained a contributing author to InPark Magazine since 2011. HIs writing has also appeared in Sound & Communications, LF Examiner, Jim Hill Media, The Planetarian, Behind the Thrills, and MiceChat His blog, ThemedReality.com takes an unconventional look at the attractions industry. Follow on twitter @ThemesRenewed Joe lives in Sacramento, California with his wife, dog, and a ghost.
Share
Facebook
Twitter
Linkedin
Email
Print
WhatsApp
Pinterest
ReddIt
Tumblr
Previous article
Polin Named Among 100 Fastest Growing Companies in Turkey
Next article
IAAPA 2014 Leadership Conference to Be Held in San Franciso