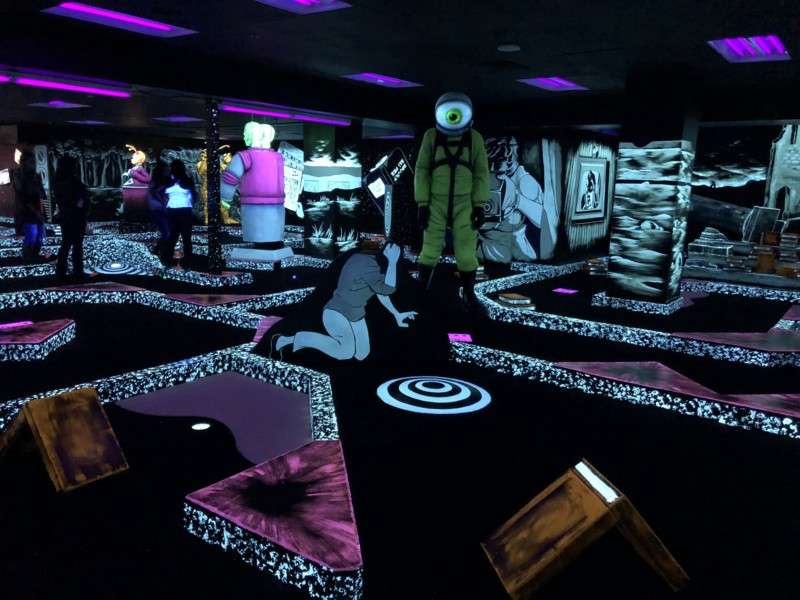 Christina Vitagliano, founder of Monster Mini Golf®, wasn’t necessarily thinking Vegas when she and her husband Patrick started the company 12 years ago. The company concept was straightforward: franchise blacklight indoor mini-golf courses with a spooky monster theme. But an opportunity came up to develop a co-branded facility in Vegas themed to the rock band KISS. The golf course, now located at the Rio resort, has stood the test of time. So when Caesar’s approached Christina about an additional space available at their Vegas Bally’s location, she decided to pursue it.

According to Christina, the location at Bally’s wasn’t like her typical site. The space was formerly occupied by several stores with lower ceilings. She had committed to not opening a Monster branded location so as not to compete with franchises located around the country, but needed to find some branding that not only fit the shorter space but also the Vegas clientele.

She had considered brands like South Park, but the licensing timeline didn’t fit with her construction schedule. CBS’s Twilight Zone seemed like a natural fit – appealing to both an older generation, but quirky enough to attract young kids. CBS also recently announced plans to reboot the series, the original episodes of which are already currently available on its streaming service.

The arrangement with Caesar’s allowed her to eliminate her F&B license so as not to compete with the resort – meaning guests are allowed to bring drinks in with them while they play. This allows her to charge $10-12 for a round of golf – a relative bargain in a city where deals are no longer as easy to come by as they once were.

Christina and her team of three artists helped build out the space and create the course. Their design/build company, Twisted Toybox, is responsible for turning their designs into reality. All art was drawn by hand, after being approved by CBS.

They discovered one challenge when attempting to recreate licenses of celebrities who had appeared in the series. Doing so would require additional licenses from those celebrities. Instead, the team got permission to either silhouette the stars or position them so their identifiable facial features were not visible.

With the addition of the second course to Vegas, Christina is moving the company out to Vegas from its home on the East Coast, citing a progressive business environment. “Vegas is a good place for business – and it’s particularly very entrepreneur friendly,” said Christina. “There are tax incentives, but the tourism industry really helps one another out here in ways you don’t see elsewhere.” She also sees Vegas’ recent efforts at providing additional non-gaming attractions as a good thing. “I want to make sure Vegas doesn’t become ‘Generica.’ We don’t need stores and attractions that you find near your home. This should be a place that is special,” she explained.

Christina has every intention of continuing to create special experiences. The team is currently working on transforming an adjoining multi-purpose room into a sci-fi themed wedding chapel, and she has plans to create additional Twilight Zone themed products to sell on site. Additionally, she has plans for a new concept development in Vegas, but details are still being kept under wraps.