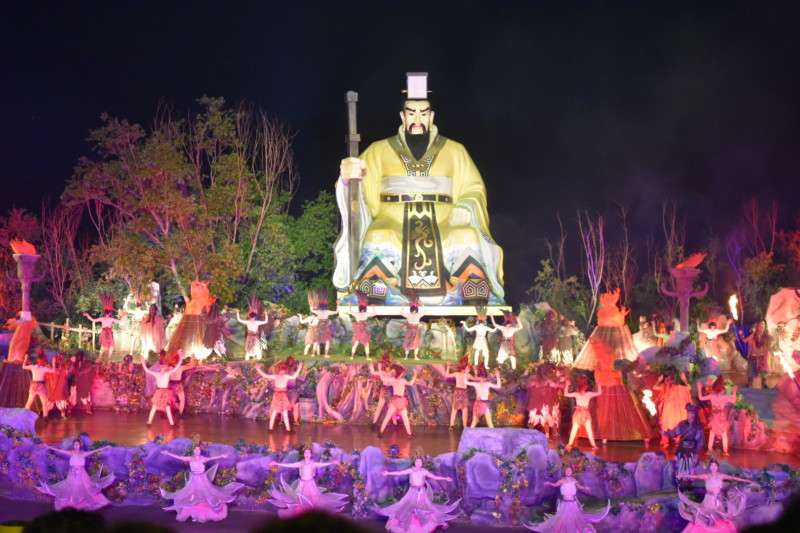 ABOVE: The Legend of the Gods nighttime show combines live performers, music, artistry and special effects to tell stories of local Chinese culture.

Every summer night in the mountainsides of Weihai, a dragon floats across the sky, a giant waving Buddha rises up out of the rocks and a torrential flood of water cascades over jagged cliffs. On certain nights, it all happens twice.

All are moments from the “Legend of the Gods” show – the centerpiece of the Weihai Huaxia Scenic Spot, and representative of the culmination of 16 years of ecological transformation and cultural conservation.

In the beginning, there were mountains

Weihai, part of Shandong province, sits on the far east coast of China, on a peninsula  south of  Beijing and north of  Qingdao that reaches towards Korea. It has hundreds of miles of beaches as well as thousands of acres of majestic mountains.

In the 1970s much of  the mountain  ranges in Weihai  had been given over to quarries. China’s expanding population and burgeoning cities needed construction materials, and Weihai provided the sought-after stone. Though good for progress, industry and urban development, the quarrying process created many ecological challenges. In addition to removing minerals from the mountains, quarrying also deforested land, dried natural waterways and eliminated acres of wild animal habitat. Visually unappealing and nearly tapped of its resources, the situation in mountainous Weihai looked bleak…until one of Weihai’s native sons decided to change all that.

Shandong Huaxia Cultural Tourism Group Chairman Xia Chunting was born to a family of farmers in Weihai. As a young man his entrepreneurial spirit began to emerge. Xia started his first company pouring concrete pipes for construction projects, growing to sell more construction equipment and machines, and eventually becoming a leading supplier of cranes in China.

Having built a large and successful corporation, Xia was well aware of the ecological damage that had been done to Weihai’s mountains and he wanted to find a way to give back to the community. He returned to his hometown in 2003 and began acquiring mountainside land that had been decimated by quarries.

He started Shandong Huaxia Cultural Tourism Group and began investing in restoring the mountains to their original natural state.

Since 2003, Xia has invested 4.43 billion RMB in the project, and has achieved spectacular results. The 321-acre site required enormous resources for the restoration process:

11 million trees were grown and planted

Only before-and-after photos (see below) accurately highlight exactly what a monumental change Xia effected on the landscape.

Although the restoration process and the subsequent tourism site are fundamentally linked, Xia is clear to distinguish the two. The restoration project was a gift to the community, and an expense Xia never expects to recoup financially. The park, however, is a business venture that has the added purpose of bringing awareness to the land (vis-a-vis the restoration project) and the cultural history of Weihai and China. Xia is well positioned to share Chinese culture and wisdom. In addition to the conservation knowledge gained through the reforestation project, Xia is a celebrated artist, photographer, calligrapher, poet and statesman. Huaxia’s offices are adorned with examples of Xia’s photography, paintings and poems. He is a respected connoisseur of Chinese art, culture and tradition.

To accomplish this, Xia developed a series of experiences at the Scenic Spot that tell the stories of Weihai, China and ecological conservation:

Jiaodong Folk Culture Museum – A collection of buildings house exhibits and displays on various aspects of Chinese art and culture. Scenic ponds, gardens and overlooks dot the landscape, providing areas for reflection, as well as views of  the Weihai valley below.

The Legend of the Gods theater is a 2,100 seat moving platform designed to appear as a boat floating across the water.

The Legend of the Gods –  This  nighttime  show  and centerpiece of the Weihai project opened in 2010 and was completely overhauled in 2018. The show speaks to the generations, tracing ancient creation legends and the development of Chinese and Weihai culture. It emphasizes the importance of land and nature.

Weihai Huaxia Scenic Spot’s focus on conservation and culture also aligns with China’s government goals. In a 2018 meeting, China’s President Xi Jinping commented, “We must speed up the construction of  a system of  ecological civilization and ensure that the ecology and environment are fundamentally improved.” (South China Morning Post, May 20, 2018.)

The park was also honored with a visit from President Xi  Jinping on June 12, 2018. The official state visit not only helped place Weihai Huaxia Scenic Spot on the tourism map, but also confirmed that Xia’s vision of sustainability, reduced pollution and cultural tourism matched the government’s.

The Legend of the Gods

Chairman Xia developed the Legend of the Gods show as an homage to Weihai’s fishing heritage. The multimedia nighttime spectacular combines live actors, trained animals, moving sets and special effects into a 60-minute show that guides guests through ancient Chinese and Weihai culture. During Weihai’s winter months, Xia updates and adds to the show, and every few years completely rewrites the show, with the most recent version debuting in 2017.

The theater is set in the site of a 210-meter-long and 171 meter­ wide quarry with seven different sets built into the landscape surrounding a lagoon. The heart of the venue is a 2,100-seat  48m x 28m moving theater. Designed to look like a large boat, the theater lifts, moves and rotates to various points in the lagoon, focusing the audience’s attention on specific scenes. Action takes place on land, in the water, in the air, and on the boat itself.

Much of the show happens without dialogue, though  each scene is set up by a narrator. LED screens on each side of the audience display English and Mandarin subtitles. As the boat rotates and moves across the lagoon, each scene unveils a new chapter in the story.

Dramatic “wow” moments happen regularly throughout the show. In one scene an actor rises up out of the water on a water-powered rocket board directly in front of the theater while costumed characters engage with audience members. In the water below, two long piers swing out in front of the ship, lined with performers and illuminated drums. As the musicians  begin  to beat the drums, the mountain behind the lagoon begins to erupt into an explosive volcano.

In another scene, the boat rotates to reveal the reforested mountainside covered with twinkling LED lights. The distinction between land and sky disappears as the lights twinkle like the stars above. At other moments in the show, performers fly above the audience on wires while fireworks illuminate overhead.

Perhaps the most lasting impression occurs near the end of the performance when the Yellow River is unleashed from the mountainside, sending 5,000 tons of water down the rocky mountain towards the audience. The volume of water is staggering and the amount of power it carries with it is evident as water crashes into the lagoon just in front of the boat.

In a sense, Legend of the Gods is almost as much of  a ride as it is a show. Seated on the boat theater, guests travel the 200m length of the lagoon as the theater rotates and moves into position for each scene, just as a dark ride vehicle does.

Creating that moving show vehicle was a major accomplishment, particularly considering that much of the equipment must withstand not only Weihai’s hot summers and cold winters, but also must operate underwater. Chairman Xia invented the technology for the moving theater, and many of the 23 patents he holds for the show center around those components.

“Legend of the Gods” was Xia’s first show and Weihai was Huaxia’s first tourism  destination  development. It’s important to understand just how foundational they both were to creating Huaxia’s portfolio of cultural attractions. Legend of the Gods inspired the company’s next show in Xiamen “Legend of Min Nan.” That show borrows many of “Legend of the Gods” technologies and transferred them to an indoor theater. The  site in Xiamen also features Huaxia’s highly themed exhibits detailing Chinese and local culture, along with a Buddha fountain show.

The company’s third show, “The Legend of Camel Bells” opened in Xian in 2017 (See “Legends, Camels and ACE,” InPark Magazine issue #76, December 2018). Camel Bells expands even further on the rotating moving theater concept with 3,000 seats inside a giant domed theater with the latest in AV technology.

In fact, many of the advances in technology from the Min Nan and Camel Bells shows have made their way back to the Legend of the Gods show during its most recent 2017 renovation. Like the rotating theaters at the heart of  each production,  the series of shows has come full circle, each inspired by and informing one another.

The “Legend” series continues,  however, with more shows in the works. Chairman Xia envisions additional venues and productions around China, and even abroad. “It’s important for me to share the Chinese culture not only with my own people, but with others aro und the world – possibly even to Las Vegas,” teases Xia. In the near future, China remains the focus. According to Xia, several major Chinese cities have been offering incentives for Huaxia Group to create cultural tourism destinations, and their next focus city is Nanjing, capital of China’s eastern Jaingsu province.

In Weihai, Chairman Xia largely considers the reclamation work on the mountain finished, joking that “one-quarter of my life has been spent rebuilding this mountain.”

While the mountain restoration work is complete, Xia’s vision for Weihai is still being executed. Huaxia is in development on two separate projects within Weihai. The  first centers around the current mountainside park and includes new food locations in the park, a hotel and an education center. The education center is designed with a focus on ecology and conservation. Inside, visitors will find a themed dark ride and flying theater. A petting zoo is also planned for the site, using Asian tribal culture as a theme for the experience. Huaxia is investing 2.35 billion RMB in these combined projects, which are currently under construction.

Huaxia’s second Weihai project is not located  on  the mountainside but instead will be close to Weihai’s central train station. “Legend of Dreams and the Sea” will be housed in a new indoor theater. ” It will build on what we have created here and take advantage of the latest in advanced technology to create a thrilling and exciting experience,” says Xia. The 1.8 billion RMB show is expected to open in 2022.

Executing Chairman Xia’s vision for Weihai Huaxia Scenic Spot hasn’t been simple, but it has been satisfying. The 16- year project is monumental in both scope and effect. Weihai is now highly regarded for its clean air and water and its commitment to cultural tourism. Huaxia’s property is recognized with a high level SA rating from the government and is in TripAdvisor’s Top 15 Things To Do in Weihai list.

Chairman Xia is proud of what he and his company have accomplished in Weihai,  but he is still humble. “Most important to me is leaving a legacy of culture,” Xia explains. ” I love Chinese culture and nothing is more valuable to  me than  to be able to leave that for future generations to understand and experience.”

If Legend of the Gods is an example, then it seems he also wants them to be entertained, amazed and a little bit in awe of this Chinese legacy that has moved mountains. • • •