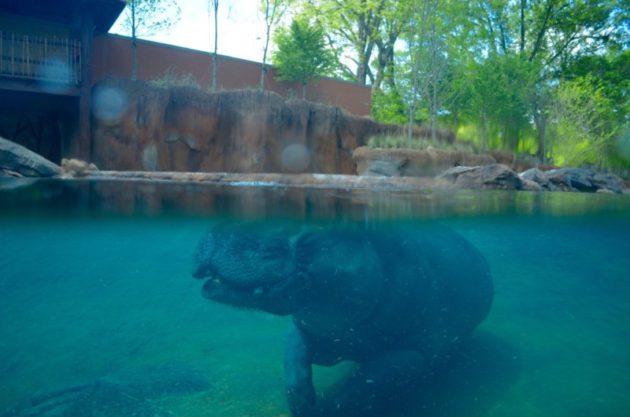 The quest to capture Pokémon in cities big and small, day and night, around the world, has motivated children and adults of all ages to visit and explore new and familiar places. Zoos and aquariums are among the many facilities that have been quick to pick up on the trend and use the Pokémon GO augmented reality (AR) craze to bring more people through the gates.

Without knocking the obvious value of increased attendance, it can be argued that Pokemon GO might distract from core mission and collections – all the more so because of its immersive, interactive power. But imagine AR or other forms of digital media applied to engage and entertain guests with content and an experience complementary to the specific venue – with the zoo or aquarium shaping the message.

In fact, such projects already exist. We look at several new examples: a smartphone app and beacon technology at the Memphis Zoo, an app that interacts with the show and projection mapping technology at the Ringling Bros Circus, a multimedia voyage to Antarctica at the Detroit Zoo that is integrated with a penguin exhibit. We also preview a new theater and gallery in the making at Aquarium of the Pacific (Long Beach, CA).

Memphis Zoo: Joined at the hippo?

The Memphis Zoo $29 million Zambezi River Hippo Camp, opened since August, is the zoo’s first use of beacons. Beacons are small physical tags, often hidden or inconspicuous within an environment, that communicate to a smartphone or tablet through Bluetooth signal, triggering area-specific content within an app. Beacons animate an environment, making it interactive and responsive in seemingly magical ways, and adding the potential to deliver new levels of information, experience and guest engagement. “We had two different catalysts for including the beacons,” says Laura Doty, Marketing and Communications Manager for the Zoo, “This new exhibit was a long time coming. We wanted to share more information with our guests.”

Speak Creative, the Memphis-based internet design company behind the Zoo’s website and app, proposed the use of beacon technology. Eight beacons were installed within the Zambezi River Hippo Camp and are currently active. Another 12 at other locations throughout the zoo will be activated soon.

The new exhibit features hippos, Nile crocodiles, flamingos, patas monkeys, and okapi, among other animals. The zoo’s app, triggered by the beacons, provides information, including media, to supplement the printed graphics. Doty explains, “We’re able to give a more in-depth look at the processes we use with the animals or the animals themselves. One of the things the beacon makes available is a behind-the-scenes video of how we moved them from their old enclosure on the far side of the park. We videoed the entire process of placing them in a crate and moving them by truck. There’s similar behind the scenes video with the crocodiles – you see the man in South Africa who raised them.”

The beacons provide other benefits. “We can track visitor movement,” says Doty. “This led us to add additional signage in one exhibit because we discovered through the beacons and the app that guests were turning around and exiting through the entrance instead of experiencing the entire exhibit.” Another benefit is the ability to change content over time. The Zoo is working with the students of St. George’s Independent School to develop new content and interactives for the app.

The app is linked to the Zoo’s social media accounts and that will soon include the Twitter accounts for the Zoo’s two female hippos, Binti and Splish. “They lend a voice to the animals – it became another way to engage them with the public,” says Doty. “Construction delays set back the opening one month – so this built up anticipation. It was very successful and we’re in discussion about other animals having Twitter accounts.”

A smartphone app now plays a key role in one of the world’s major circuses.

Feld Entertainment made the decision in 2014 to retire all of its Asian elephants, and has been re-envisioning the Ringling Bros Circus. Patrons of the new show, “Out of This World,” are directed to start their experience by downloading the show’s app on their devices. The app features augmented reality games (such as taking a selfie in a costume animated by the app), trivia, and surveys. Two large screens flanking either side of the stage display Tweets and other social media posts during the pre-show.

Story-driven with fast-paced action, “Out of this World” is not your grandparents’ circus. As rubber flooring is no longer needed for elephants, the majority of the stage is now an ice surface – used for skating (nothing new to the Felds, who also run Disney on Ice) – and also as a projection surface. A single performance ring sits atop the ice at the far end of the stage.

Suspended from the ceiling is a 54’ x 138’ long truss grid, capable of holding up to 118,000 pounds. Among the equipment housed in the grid are seven 4K digital projectors, which utilize the white surface of the ice for a series of projection-mapped sequences designed by Jimmy Lakatos (whose clients also include Cirque du Soleil), and programming by Scottish firm The Hive Creative using d3 projection mapping equipment and software. Projection virtually transports the show “out of this world” to other planets where, as the story goes, various circus acts that had disappeared are now rediscovered. For example, the big cats perform on a desert planet.

Also in the grid is an automated spotlight system. Each performer wears a stringer, a long cord that runs through their uniform, attached to a battery pack on one end and an infrared emitter on the other. Small cameras in the grid track the emitters and, upon command, initiate a spotlight which automatically follows the signal.

Penguins and projection at the Detroit Zoo

The Detroit Zoo is using multimedia to simulate one of the harshest environments on Earth at the 33,000 square foot Polk Penguin Conservation Center. The Center is not only dedicated to its namesake avian, but presents a multimedia trip through Antarctica.

In the entrance gallery, in a two-story pavilion shaped something like an iceberg (architects were Albert Kahn Associates and Jones & Jones Architecture) visitors view the main penguin exhibit. The pavilion holds about 300 people at a time and timed ticketing modulates the flow. More than 80 birds and four species can be seen through a large acrylic window as they dive and swim in a 326,000 gallon, 25-foot deep pool. A wave machine, with three unique settings, allows the penguins to experience the water as they would in the wild.

The zoo wanted to convey the extremity of the Antarctic environment in two ways: as a home to penguins and a challenge to human explorers. Visitors descend via ramp to the lower level for an immersive, simulated journey through the Drake Passage – the 500-mile-wide stretch of ocean between Chile and Antarctica. Their vessel is Ernest Shackleton’s ship The Endurance, which in 1915 became crushed in the ice of the Weddell sea, leading to a precarious trek over the ice and the continent. Miraculously, all crew members survived.

To design the multimedia Endurance production, the Detroit Zoo engaged SimEx-Iwerks, with which it has a long-term relationship. The show utilizes five short-throw, ceiling mounted 4K laser projectors on five walls at odd angles, along with wind and spray effects to give the effect of being on stormy seas. According to David Needham of SimEx-Iwerks, “The exterior of the building is reflected in the interior where there are no real straight lines. We wanted to be as low impact as possible on the building while creating images that filled the space.”

Video monitors seen through portholes display other animals that live beneath Antarctic waters – leopard seals, orcas, humpback whales, and giant squid. Between two acrylic viewing tunnels where penguins swim above and around guests is another large, underwater viewing window that doubles as a screen. Based on its Human-Machine Interface technology, which allows important dashboard information to be projected on a car’s windshield, auto manufacturer Denso provided the Zoo with projectors that provide temperature information and facts about the penguins, shining on the acrylic, but appearing to float in the water.

As they ascend another ramp back up to the “surface” visitors are surrounded by more projection, as if they are watching from a ship just off the Antarctic coast as ice drops from a glacier into the ocean. Another view of the penguins is provided through a window in the exit gallery, followed by retail. 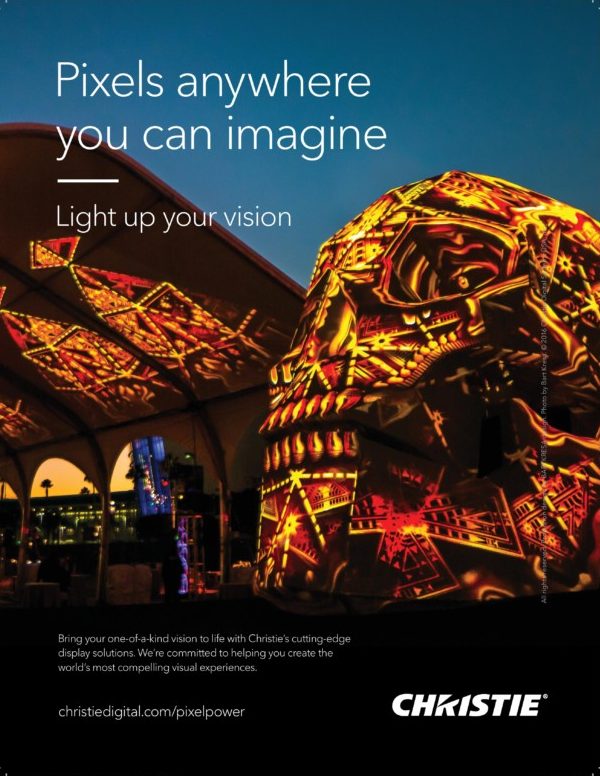 Aquarium of the Pacific: the future happens

Projection plays a key role in the design of the new Pacific Visions pavilion at Aquarium of the Pacific in Long Beach, which is scheduled to open in 2018. Its four components are an art gallery, an orientation gallery with media wall, a unique theater presentation, and a post-show gallery with interactive elements and live animals.

According to Fahria Qader, the Aquarium’s project manager in charge of the campus master plan, “Pacific Visions is the result of meetings we had in 2005, with input from board members, staff, and designers.” The goal is to showcase the oceans in new and dynamic ways.

According to Derek Balsillie, the Aquarium’s Senior Manager of AV & IT the art gallery will feature a combination of sculpture and media based artwork, with the collections changing periodically. The idea, according to Qader, is to get people thinking about science through examining art.

Inside the orientation gallery, on a 28’ x 8’ screen, visitors will be posed questions that are later revisited in the main presentation. Qader says, “Our first story will be about designing the future. We want guests to start thinking about the future and how to get there, to have an active role, to learn and be educated in a fun way, and to start involving others. They’ll be able to branch out to others through options like our app.”

The theater presentation is the main show. It will run about eight minutes on a 130’ x 30’ screen with 130-degree curvature, fed by three 4K projectors. A fourth projector will be under the floor of the theater. Details of AV, 4D effects and interactivity are still being worked out. “The idea,” says Qader, “is to give the impression of looking down in the ocean.” The theater will also serve as a multi-purpose space for evening events, performing arts, music, lectures, etc.

After the main show will be other multimedia experiences, interactives, and live animal displays. An app will be designed to complement the experience.

As their guide for Pacific Visions, the Aquarium of the Pacific adapted a quote from the American historian and philosopher Will Durant: “The future never just happened. It was created.” • • •

Joe Kleimanhttp://wwww.themedreality.com
Raised in San Diego on theme parks, zoos, and IMAX films, InPark's Senior Correspondent Joe Kleiman would expand his childhood loves into two decades as a projectionist and theater director within the giant screen industry. In addition to his work in commercial and museum operations, Joe has volunteered his time to animal husbandry at leading facilities in California and Texas and has played a leading management role for a number of performing arts companies. Joe previously served as News Editor and has remained a contributing author to InPark Magazine since 2011. HIs writing has also appeared in Sound & Communications, LF Examiner, Jim Hill Media, The Planetarian, Behind the Thrills, and MiceChat His blog, ThemedReality.com takes an unconventional look at the attractions industry. Follow on twitter @ThemesRenewed Joe lives in Sacramento, California with his wife, dog, and a ghost.
Share
Facebook
Twitter
Linkedin
Email
Print
WhatsApp
Pinterest
ReddIt
Tumblr
Previous articleThis is How Weber ROCKS!
Next articleA Zoo for Generation Z