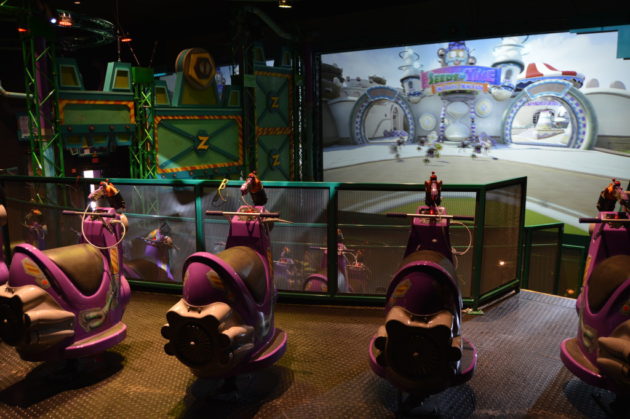 In 2015, Alterface Projects, a leader in the manufacture of interactive attractions, helped Six Flags St Louis and Six Flags Over Texas thrill guests in new ways with the 3D interactive dark ride technology in Justice League 4D: Battle for Metropolis, produced in creative collaboration with Sally Corporation and others. Justice League 4D proved so popular that in 2016 it was added to Six Flags Great America in Gurnee, IL and Six Flags México, with more locations anticipated on the way.

[dropcap color=”#888″ type=”square”]M[/dropcap]eanwhile, two more new Alterface-powered, family-oriented attractions have recently opened, on opposite sides of the globe. Benno’s Great Race at Ferrari World Abu Dhabi uses Alterface Drag & Drop gameplay; Plants vs Zombies at Carowinds (Charlotte, NC), a Cedar Fair park, features the Alterface Dueling Interactive Theater. Benoit Cornet, founder and CEO of Alterface Projects (which is headquartered in Belgium) describes these experiences as “made in a clever way where the technology is not visible, but is highly effective.”

[quote]The concept behind the interface is quite simple: riders point at the object they’d like to move on the screen, they press the button on the wrench and hold it, finally, they drag the object anywhere they want, and release the button.”[/quote]

The immersive guest experiences these attractions deliver (described in detail below) were previously not possible on this level – especially for regional parks. The technology has taken huge leaps, becoming so transparent and intuitive – so nearly invisible as technology per se – that guests can take them for granted, and slip into an experience and lose themselves in the magic – and regional parks can be just as innovative as the biggest operators. 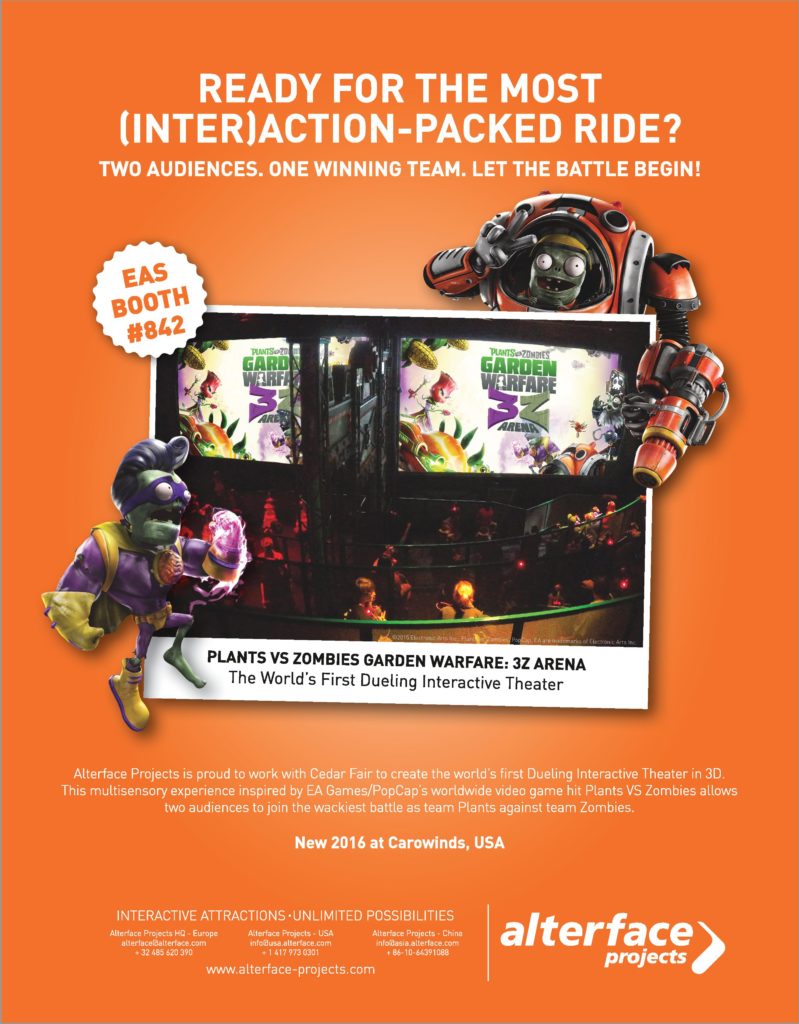 This is gamification on a real-world scale like never before. The kind of interactivity and graphic realism that were once confined to the gaming console have migrated successfully to the theme park platform.

• The theme park environment responds to the guest in real time, in ways that couldn’t be done before. As Cornet says, “Play is never the same” [from one time to the next].

• Real-time video graphics have achieved a level of sophistication, fluidity and speed that conveys a sense of realism and detail

• It enables communal play, in a shared physical space. Guest-players compete against one another but must also cooperate towards a common goal.

In order to bring in new customers, encourage return visitation, and remain competitive, theme parks consistently add and upgrade attractions. Ferrari World Abu Dhabi is no exception. It recently finished Phase 2 of its expansion, no doubt with an eye on the four new theme parks opening in the UAE this year. Part of that expansion is Benno’s Great Race, an interactive 4D family ride using original characters and story developed for the park.

On the six-minute ride, guests join Benno the mouse, Rossa the fox, and their animal friends as they attempt to win the Maranello Piccolo Prix. On board one of the 11 trackless MultiMover vehicles from Dutch firm ETF, each of the five riders takes hold of a tethered game controller shaped like a wrench, which acts as a series of tools throughout the ride. When not in use, the controllers live in holders located directly in front of each seat. As with Justice League, Alterface partnered with Pure Imagination Studios for the attraction’s animation, which takes place on nine interactive screens with subtitles in both Arabic and English. Physical sets and animatronic figures round out the décor.

According to Cornet, “This is not action driven. It’s a task-oriented ride. The wrench becomes a gathering tool, scissors, and other tools. It changes from scene to scene.” The concept behind the interface is quite simple: riders point at the object they’d like to move on the screen, they press the button on the wrench and hold it, finally, they drag the object anywhere they want, and release the button. It’s designed to be very familiar for an audience already used to the click and drag functionality of a computer mouse. “You can’t aim with a wrench, like you could with a gun,” continues Cornet, “This attraction is based on the movement of your tools.”

Riders use the “wrench” to build Benno’s car, fight off a barrage of tomatoes, free a friend from a spiderweb, and light fireworks. “We found this to be a good fit between the player and the device,” says Cornet, “It really opens up new gameplay allotment.”

“At PopCap Games, we’re fans of new and cool projects,” says Jeremy Vanhoozer, PopCap’s Senior Creative Director. “We were looking at different directions we could take our Plants vs Zombies games and considered a pretty broad range of attraction concepts – from 4D theaters to dark rides.”

This desire to evolve the popular video game franchise into new directions took one step closer to becoming reality a few years ago when Cedar Fair began discussing options with PopCap’s parent company, Electronic Arts (EA). According to Christian Dieckmann, Cedar Fair’s Vice President of Strategic Growth, “We’ve been pursuing a broad range of digital attractions. Our ‘Amusement Dark’ dark rides [Wonder Mountain’s Guardian at Canada’s Wonderland and Voyage to the Iron Reef at Knott’s Berry Farm] were the first model, and that will continue. Part of our more recent digital attraction initiative involves our partnership with EA and how we can present new ways to present their properties using unique technologies.”

As Vanhoozer points out, “There are two Plants vs Zombies franchises. The original one is a strategy game, whereas Garden Warfare is meant for families or friends to play together, with one side battling the other. It was an ideal fit for Alterface’s new theater system.”

Alterface’s Cornet points out, “We opened our first interactive theater in 2006, so some of those theaters are now celebrating their 10th year of operation. In the Dueling Interactive Theater, it’s one team versus another team. This adds a layer of fun because now everyone’s teaming to defeat the other team. You can see everybody in the theater, so there’s visual contact between teams.”

“We had a pretty good conversation from day one with Alterface,” says Vanhoozer. “We were finishing up Garden Warfare 2, and as we were completing them, we sent our models to Alterface. The team at PopCap worked with them on how to present the characters. We worked directly with them on storyline, the custom experience, artwork, everything for the preshow, including preshow dialog, to make sure the voice was correct. We worked closely with them to make sure computer graphics were right.”

Players sit on one of 62 motion-based seats with a custom, Alterface-designed shooter attached. The audience is split in half, each half facing its own 14.6’ x 26’ 3D screen. Cornet points out that “the process was relatively simple – this was not a simulator approach. We concentrated on the quality of the game, rather than moving players in all directions. Since our focus was on gameplay, we needed to perfectly position each person. There are some gates, some bridges in the game. Some elements from one team will appear on the screen for the other side, and the gameplay on one side affects the other side. Play is never the same.”

An introductory preshow video featuring the character Dr. Zomboss sets the stage and allows both those familiar with Plants vs Zombies and those who have never played the game to understand the back story and the gameplay they’re about to encounter. As animation is rendered in real time with the Unreal game engine, characters, scenery, and storylines can be switched or added as they are introduced into future iterations of the franchise.

According to Cedar Fair’s Dieckmann, the attraction fits in perfectly with planned improvements at Carowinds. This year, it wanted to concentrate on families and Plants vs Zombies was part of that. “It’s doing very well with families. Parents will come out of it with their kids and they’re both excited. It’s very important that our park fans know this is an attraction we created for them, and not something generic we just ported in, so among other things, we’ve included Carowinds Easter Eggs inside Plants vs Zombies.”

Alterface continues to explore new ways to interact on 4D attractions. “We’re putting lots of R&D into a new non-linear dark ride,” says Cornet, “It provides a completely random approach to how you experience a dark ride.”

The company is also working with a number of leading universities in Belgium on virtual reality research, primarily in the fields of tracking and signals. Cornet sees this desire among companies to turn the living room into an attraction via VR technology, but Alterface is leaving the in-home entertainment sector to others. Alterface, on the other hand, will continue to concentrate on new ways for guests to experience out-of-home interactive attractions. • • •

Joe Kleimanhttp://wwww.themedreality.com
Raised in San Diego on theme parks, zoos, and IMAX films, InPark's Senior Correspondent Joe Kleiman would expand his childhood loves into two decades as a projectionist and theater director within the giant screen industry. In addition to his work in commercial and museum operations, Joe has volunteered his time to animal husbandry at leading facilities in California and Texas and has played a leading management role for a number of performing arts companies. Joe previously served as News Editor and has remained a contributing author to InPark Magazine since 2011. HIs writing has also appeared in Sound & Communications, LF Examiner, Jim Hill Media, The Planetarian, Behind the Thrills, and MiceChat His blog, ThemedReality.com takes an unconventional look at the attractions industry. Follow on twitter @ThemesRenewed Joe lives in Sacramento, California with his wife, dog, and a ghost.
Share
Facebook
Twitter
Linkedin
Email
Print
WhatsApp
Pinterest
ReddIt
Tumblr
Previous articlePHOTOS: Plants Vs Zombies Garden Warfare: 3Z Arena
Next articleAZA Announces General Session Speakers for Annual Conference