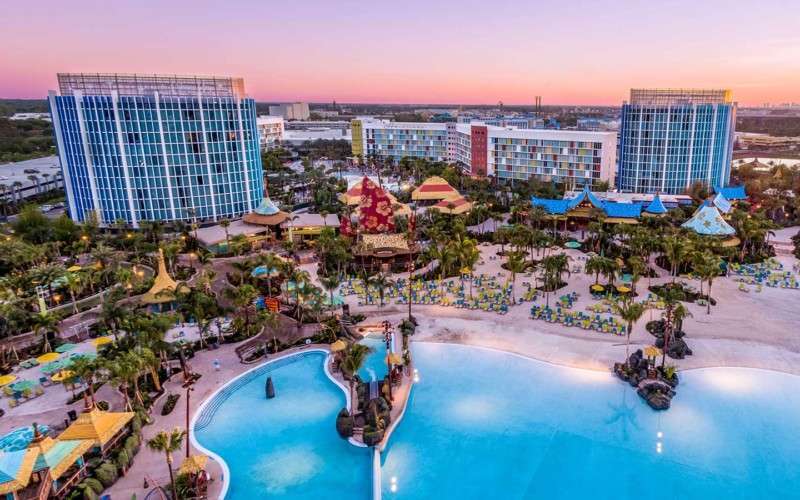 Two years ago, we analyzed ten years’ worth of data from the TEA/AECOM Theme Index which revealed a number of industry patterns – among them that park expansion fosters attendance growth, and that independent park operators buoyed a strong market in Asia.

Following the release of the 2017 report (in May 2018), we opted to compare the attendance from 2017 to one year, five years, and ten years prior (2016, 2012, and 2007, respectively). One of the first things that stood out – as with the following chart illustrating the top five global operators – is that Disney far and away exceeds the attendance of any other chain. The Disney figures are comprised of attendance at wholly-owned operations, joint ventures (such as Shanghai Disneyland), and licensed parks (Tokyo Disneyland and Tokyo DisneySea).

We can see steady growth over the past ten years for each of this year’s top five operators and, as will be expanded upon later, operators of fully integrated resorts are seeing stronger growth than regional chains. 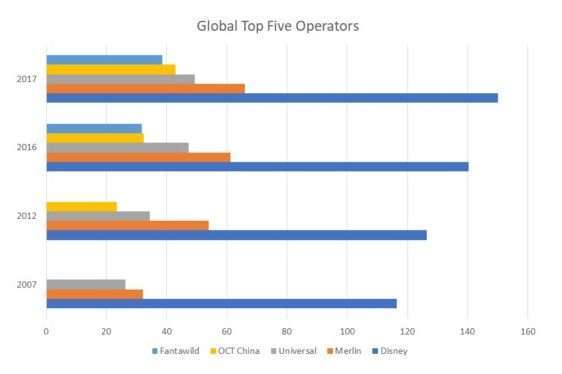 Examining the second half of the Top 10 global operators list – numbers six through ten – reveals that it’s made up primarily of regional chains in the United States – Six Flags, Cedar Fair, and SeaWorld, along with international operator Parques Reunidos and Chinese operator Chimelong Group. Chimelong continues to show strong growth at its two resorts and five parks and, in 2017, surpassed the attendance of Six Flags at its 20 North American parks. Following a high in 2013 of 26 million guests, Parques Reunidos experienced two years of attendance drop, partially due to discontinuing its management of the Oceanografic aquarium in Valencia, Spain (1.2 million annually) and severe flooding in the French Riviera causing the late 2015/early 2016 closure of the company’s flagship marine life park, Marineland Antibes (900,000 annually). Over the past few years, the company has stabilized its attendance, increasing its ownership and management stakes in Europe, the Middle East, and Asia.

During the same period, SeaWorld Parks & Entertainment hit a company high in 2012 of 24.3 million guests, one year before the company went public. Following the IPO, the company began a steady year-after-year attendance decline. However, it appears the chain may be ready for a turnaround. As Brian Sands and Kathleen LaClair point out in the 2017 Theme Index: “While 2017 was another challenging year for SeaWorld, there have been some signs in early 2018 that things may be more positive in the coming year, with first quarter revenue and attendance up significantly versus the same period the year before. Beyond increased marketing efforts this year, which should help attendance generally, several of SeaWorld’s parks have major new rides opening, and SeaWorld is also expanding its use of the Sesame IP at a number of parks, with additional activities understood to be in the works. In addition, Miral and SeaWorld have partnered to develop SeaWorld Abu Dhabi which is scheduled to open in 2022, and reports of potential expansions into Asia continue to circulate.” 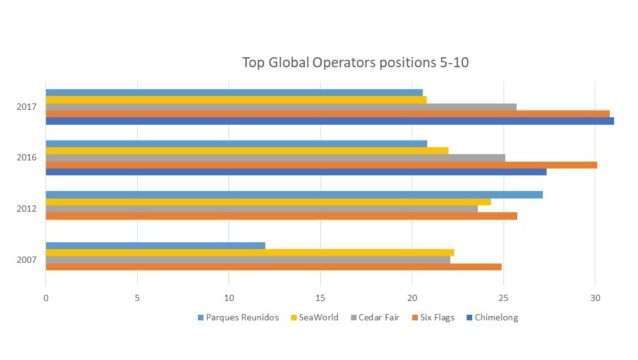 With the 2017 Theme Index as our foundation, we also chose to dig deeper into what’s going on within two key growth markets – Orlando and Mainland China. For the Orlando market, we chose those theme parks in Central Florida that made the top 20 North American theme park attendance list. Therefore, smaller parks such as Fun Spot, Discovery Cove, Holyland Experience, or LEGOLAND Florida are not included in our chart. As with SeaWorld Parks & Entertainment’s overall attendance, SeaWorld Orlando has seen a steady decline since peaking in 2008 at 5.9 million guests, which happened to be the final year of ownership under Anheuser Busch and the Busch family. One thing that is noticeable in our chart is the continued increase in attendance of those parks which are part of a fully integrated resort, including on-site hotels, something we’ve pointed out in the past as lacking within SeaWorld’s properties.

In addition to keeping guests on property, integrated resorts also achieve increased visitation through continued introduction of new, high end attractions. As AECOM’s Sands and LaClair pointed out in the Theme Index: “Disney remains king of the industry with the top five parks in North America. As shown in our charts, there are six Disney parks among the Top 20 theme parks in North America and those six parks account for 55% of total attendance.

“Disney is leveraging the power of compelling intellectual property (IP) with Pandora — and new Star Wars-themed lands on the horizon — as did Universal with the Harry Potter attractions, and both set a leading example for the industry.

“These operators have significant libraries of IP to work with and continue to acquire more. . . .” As Disney and Comcast vie for the film and television assets related to 20th Century Fox, the Orlando market may become even more competitive between the two with more blockbuster IP-based attractions, theme parks, and resorts operating under the Disney and Universal banners. 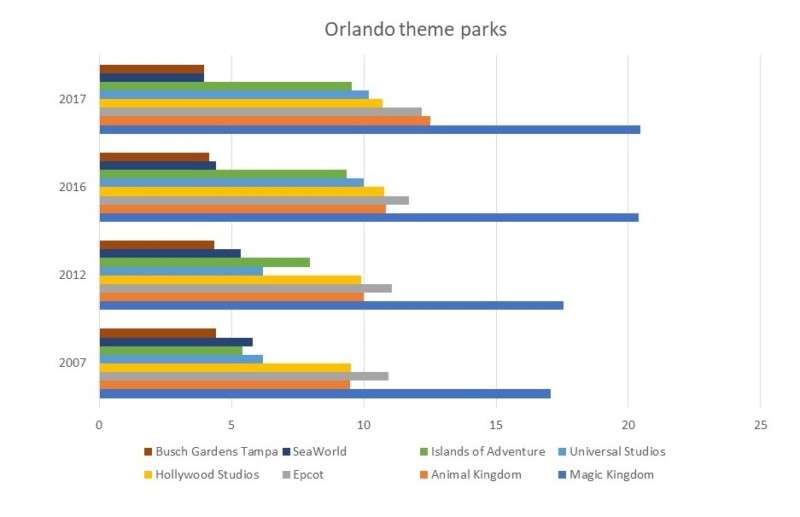 Turning to China, we observe that fully integrated resorts that are employing unique IP have much higher attendance and growth than those operating on a regional basis. Because of the number of new parks that have been added each year to the mix, we opted with our chart to select the most-visited park in Mainland China for each year surveyed and examine it across each of the four years.

Until the opening of Chimelong Ocean Kingdom, two OCT parks – Happy Valley and OCT East, both in Shenzhen -occupied the top spot for Mainland China. While the OCT parks remain strong, Chimelong’s two theme parks rank higher by attendance – in the fifth and twelfth spots respectively – in the TEA/AECOM 2017 Asia-Pacific list. Both are integrated resorts featuring full-service hotels. The remaining slots on the Asia-Pacific Top 20 are held by OCT and Fantawild regional parks.

AECOM’s Chris Yoshi and Beth Chang are optimistic about the continued growth of the sector in China, noting in the 2017 Theme Index the anticipated opening of Universal Studios Beijing “and many other projects still in the pipeline.” 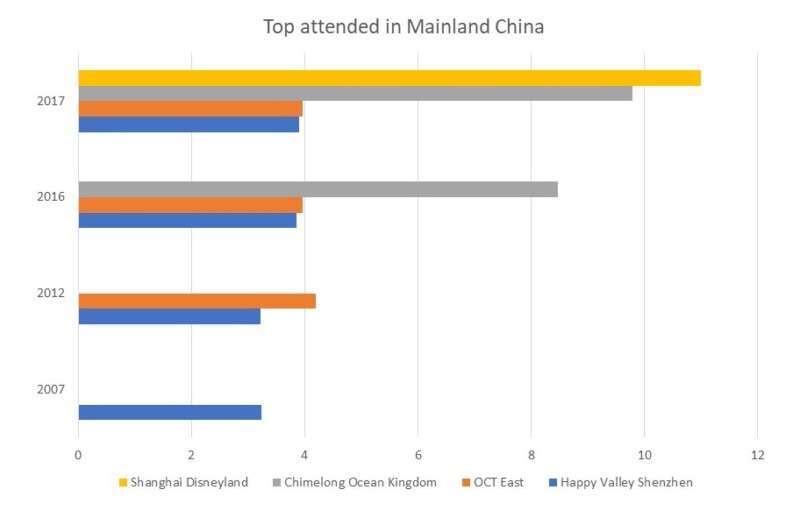 As with our study two years ago, patterns have emerged. Expansions and new attractions, especially those that are high-budget and involve either established external or internal IP, tend to result in higher attendance. Parks that are part of a fully integrated resort also tend to have a much higher attendance for their market than those lacking hotels.

Theme park attendance is a mixed bag by market. In the US and Canada, attendance remains steady or growing, with the exception of SeaWorld’s flagship parks in San Diego and Orlando and Busch Gardens Tampa. Latin America mixed, with half of the top ten parks remaining steady or growing, and the other half losing attendance from 2016. Sands and LaClair write: “Attendance declined more than 2.0% at the Top 10 theme parks in Latin America in 2017. The primary factor was an estimated dip of nearly 30.0% at Hopi Hari where attendance declined by almost 500,000 visits. Financial upheaval led to the park being closed for three months in 2017.”

Europe and the Middle East results were also mixed. The majority of parks remained steady in their attendance, though there were some significant increases from 2016, such as the 15% with Disneyland Paris, and significant losses at Gardaland and Heide Park. AECOM’s Margreet Papamichael writes in the 2017 Theme Index: “Disneyland Paris had a great 25th anniversary year and has recouped the loss in attendance from the previous year.

“Despite rising consumer confidence in Germany, performance there was mediocre if not poor for many parks. In this case, bad weather — especially poor during peak season — was the likely culprit and given the blame by many operators. We understand however that many parks achieved record attendance levels over Halloween, the importance and popularity of which is still increasing.

“Italy has been experiencing a bad run economically, and some extremely bad weather combined with some natural disasters during peak season weekends impacted performance in this country, and Gardaland specifically. We wish them a year of perfect weather and a lack of political storms.”

Asia-Pacific maintained growth over the prior year, with the exception of two South Korean parks, Lotte World and Everland, which decreased by 17.6% and 9.5% percent, respectively. AECOM’s Yoshi and Chang write that lower attendance at Korean parks is “due to the falloff of Chinese tourists to the region.”

Chinese tourists appear to be going instead to parks in China, where the building blocks are well in place for an increasing number of theme parks, fully integrated resorts, and high budget based attractions, all resulting in continued growth in the region. Yoshi and Chang point out: “The success of Shanghai Disney has been very encouraging, showing developers that they should invest in world-class and best-in-class projects, and the market will respond. Having a theme park is still seen as an important asset to a modern city in China, and we are going to continue to see new projects and new announcements. The factors that fuel this development are all still there: economic growth, a rising middle class, rising disposable income, the inclination to travel, better transportation infrastructure, and automobile purchases. These are all positive factors driving increased consumer demand for entertainment experiences.”

Joe Kleimanhttp://wwww.themedreality.com
Raised in San Diego on theme parks, zoos, and IMAX films, InPark's Senior Correspondent Joe Kleiman would expand his childhood loves into two decades as a projectionist and theater director within the giant screen industry. In addition to his work in commercial and museum operations, Joe has volunteered his time to animal husbandry at leading facilities in California and Texas and has played a leading management role for a number of performing arts companies. Joe previously served as News Editor and has remained a contributing author to InPark Magazine since 2011. HIs writing has also appeared in Sound & Communications, LF Examiner, Jim Hill Media, The Planetarian, Behind the Thrills, and MiceChat His blog, ThemedReality.com takes an unconventional look at the attractions industry. Follow on twitter @ThemesRenewed Joe lives in Sacramento, California with his wife, dog, and a ghost.
Share
Facebook
Twitter
Linkedin
Email
Print
WhatsApp
Pinterest
ReddIt
Tumblr
Previous articleKen May to lead US operations and growth for Urban Air Adventure Park
Next articleEPR Properties expresses concern that Schlitterbahn murder charges could hinder repayment of loans