SeaWorld’s Future Lies Not With FUR, But With FIR

There is one thing that SeaWorld parks in Southern California and Central Florida have long lacked that their counterparts take advantage of every day – they’re not fully integrated resorts (FIR’s).  A fully integrated resort is a cohesive land development tying together entertainment (such as theme parks and/or water parks), hospitality and retail. Depending on the region, other elements can include gaming and even housing.

New SeaWorld CEO Joel Manby (above, at the November 9, 2015 Investor Day presentation) has made FIR a cornerstone of his vision for the company’s new direction.

Hospitality is the unifying aspect. What differentiates the FIR hotel is its being tied to other elements of the visit. Examples include a single account linked to the hotel room for all charges incurred around the resort, special discounts and benefits throughout the resort exclusive to those staying at the FIR hotel, and/or exclusive forms of transportation.

From Chimelong’s two resorts in China to numerous examples operating on the Las Vegas Strip, a fully integrated resort brings increased revenues through longer guest stays and higher per cap spending. The FIR model is pretty much the standard development scheme for a new theme park or major entertainment development around the world – witness any number of Genting projects, and the plans rolling out for new, studio IP based parks and resorts such as the Fox World theme parks. Older parks have been retroactively applying the model over the past 15 years or so – examples include Tivoli Gardens as well as Disney and Universal.

Now it’s time for SeaWorld to catch up.

The idea to introduce an FIR model at SeaWorld has been on the table in one form or another for decades.

In the 1960s, a hotel was under consideration for SeaWorld San Diego, while one has been discussed on and off for SeaWorld Orlando since the 1970s.

In the late 1980s, the original plans for SeaWorld San Antonio called for a SeaWorld park, a waterpark, and Texas versions of two of the company’s Central Florida operations: Cypress Gardens and Baseball & Boardwalk, along with a retail complex and hotel.

In 1999, close to 200 acres of rural land was purchased by Busch Gardens Tampa so that animals could be relocated while a new hotel was built. 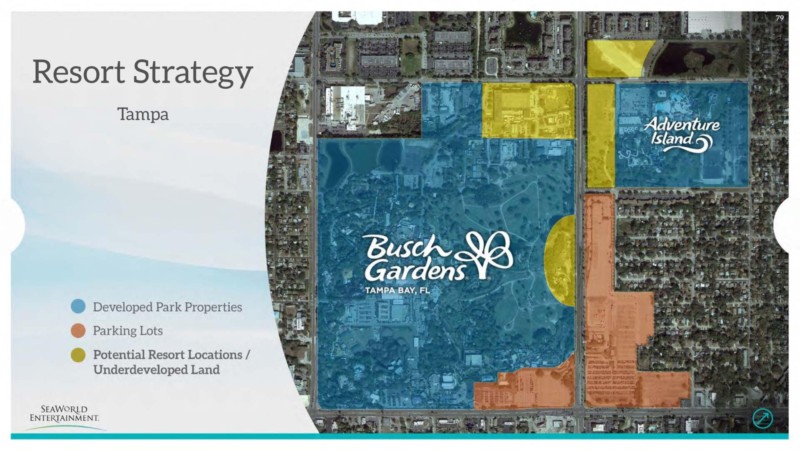 Although the Tampa hotel planned in 1999 was never constructed, a new concept is in the works for the same location. Talks are also currently underway with a local hotelier to build on the SeaWorld property in San Diego (SeaWorld also owns a waterpark in Chula Vista, approximately 30 minutes away and easily accessible via shuttle), and the company is also looking at hotels on its San Antonio and Orlando properties.

On February 19, SeaWorld announced the formation of its Resort Development Group, headed by Steve Iandolo.  If the name of Iandolo sounds familiar, it may be because he led the effort on Dollywood’s DreamMore Resort and developed the hospitality portion of the rest of Dollywood’s 10-year $300 million expansion – all under former Herschend Family Entertainment CEO Joel Manby and Herschend’s SVP, Guest Experiences, Design + Development, Anthony Esparza, now also with SeaWorld.

Iandolo became  well-known as the Creative Director of Hotels at Universal Orlando.  Three of the current four hotels at the Universal Orlando Resort – Portofino Bay, Hard Rock, and Royal Pacific – bear his mark. His role was integral in the transformation of Universal from a single theme park to a fully integrated resort.

FIR: not only what SeaWorld wants, but what it needs.

Ron Bension and Don Robinson, the two new Board members SeaWorld announced on April 15, both have extensive experience with FIR’s, particularly in the Orlando market. Bension was CEO of Universal Studios Recreation Group. He oversaw the transformation of the Universal Studios Florida theme park into the Universal Orlando Resort. He worked closely with Iandolo on the project. Robinson was an executive with Walt Disney Parks and Resorts.  He oversaw the opening of themed Disney resort hotels in Orlando and Paris and was the man in charge of operations for both the entire Walt Disney World Resort and Hong Kong Disneyland.

A fully integrated SeaWorld or Busch Gardens resort can allow resort hotel guests personalized experiences, akin to Disney’s MyMagic+, along with exclusive animal encounters either within the park or on the hotel grounds itself.

The appointments of Bension and Robinson are the strongest confirmation yet that fully integrated resorts are the future for SeaWorld.  Although the company lacks the IP and financial resources of Universal and Disney, its unique animal collection and approach to creative design will give its resorts a competitive advantage within their markets.

In the theme park universe, there are two kinds of parks – destination parks and regional parks. Destination parks are the type you buy airline tickets for, book a hotel, and in some cases possibly leave the kids at home. With the exception of Discovery Cove, the SeaWorld parks have never had full destination status – one usually wouldn’t book a flight to San Diego just to visit SeaWorld. They did, however, for many decades, work quite well as complimentary parks to others in the same market: A visit to Disneyland or the San Diego Zoo, for example, could easily be tied in with a visit to SeaWorld. 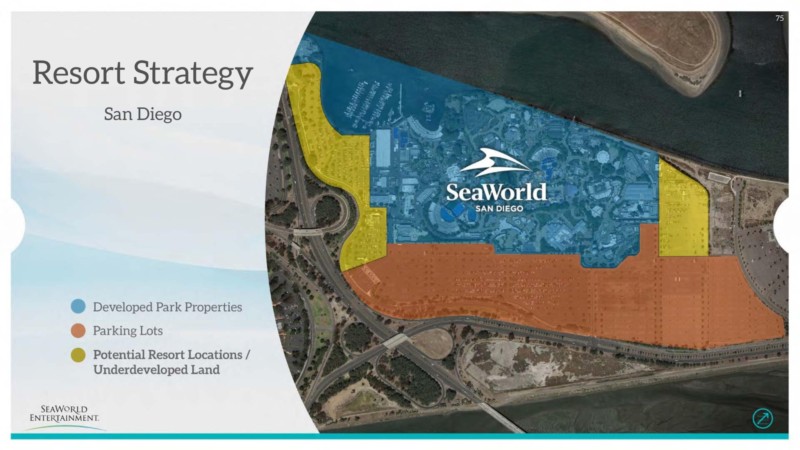 However, in these destination markets, SeaWorld is not the only complimentary park or attraction. Visitors to Disneyland and Universal Studios Hollywood may instead chose to visit regional parks such as Knott’s Berry Farm or Six Flags Magic Mountain, and now Merlin Entertainments has entered both the California and Florida markets with its LEGOLAND parks becoming fully integrated resorts in their own right. Not to mention other types of contenders such as the I-Drive developments and Crayola Experience.

Between 1998 and 2001, several things took place in Orlando and Southern California that would have a long-term effect on SeaWorld and its parks: 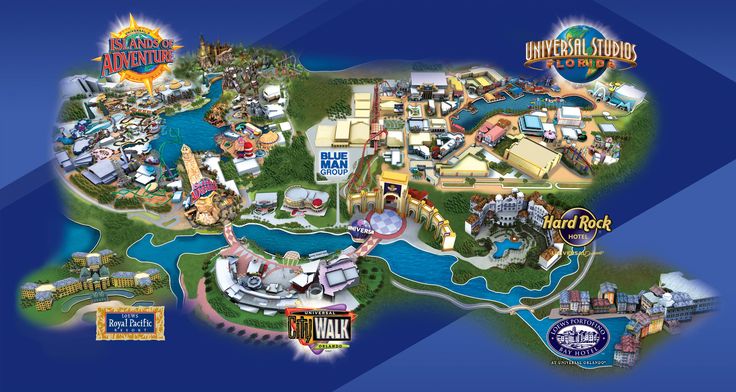 –A year later, Universal Studios Florida was transformed from a single park into a fully integrated resort, with a second theme park (Islands of Adventure) that extensively utilized licensed IP, heavily themed hotels and the CityWalk retail and entertainment district. By becoming an FIR, Universal was able to create a multi-day experience that discouraged guests from leaving the property.

–In response, Disney further intensified its efforts to increase on-property offerings to guests. By this time, Walt Disney World was already operating over half a dozen hotels, two waterparks, and Downtown Disney (now Disney Springs).

SeaWorld’s move was to open a second park of its own – Discovery Cove  in 2000. However, instead of opting to build its own on-site hotel as part of the expansion, the company partnered with existing hotels in the vicinity on vacation packages (a practice reinvigorated earlier this year under a new program). 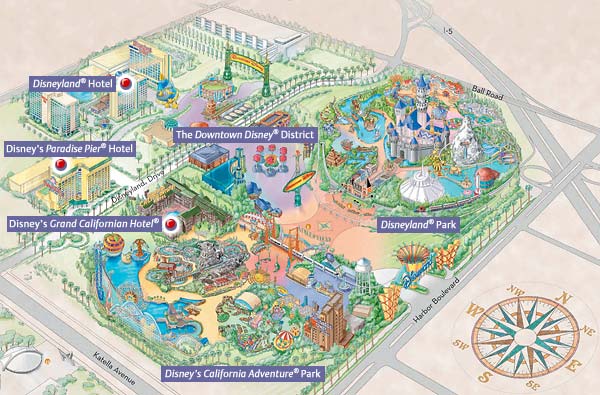 In 2001, Disneyland became Disneyland Resort – adding a third resort hotel to the two already in place, as well as a second theme park (California Adventure), and a Downtown Disney.  Disneyland guests wishing to add another day at another park – such as SeaWorld – now might instead opt to visit California Adventure. Disney offered the encouragement of discounted multi-day, multi-park tickets for its own parks.

Neither the San Diego nor Orlando SeaWorld parks is exactly a destination park, but they’re also not strictly regional, unlike the company’s parks in Pennsylvania, Virginia, Texas, and Tampa.  For SeaWorld Orlando and SeaWorld San Diego to compete in a market where they’re up against IP such as Harry Potter, Star Wars, and Avatar, they must become fully integrated resorts, offering something that Disney, Universal, and LEGOLAND can’t.

Animals and animal experiences are the differentiating factors for all three SeaWorld parks, Busch Gardens Tampa, the Aquatica waterparks, and Discovery Cove. And we can expect animal experiences to be integrated into the new hotels (FUR into FIR). Last month, SeaWorld made the dramatic announcement that it was ending breeding of its orcas, but as long as they remain a part of the parks, they will play a pivotal role in the FIR’s.  As will other animals.

One trend that zoos, especially the San Diego Zoo, and aquariums have picked up on is the upcharge animal encounter experience.  From an operational standpoint, costs are low, while revenue can be as high as a few hundred dollars per person per event. 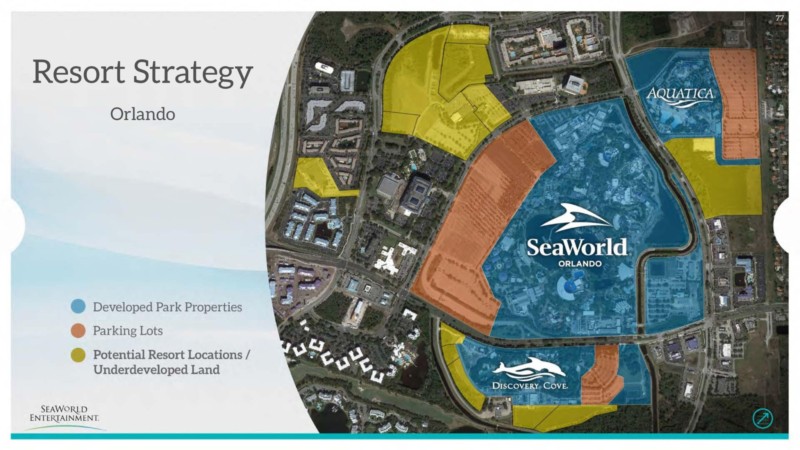 One of SeaWorld’s initiatives for growing in-park revenue was announced last November – “Offer packages that connect the in-park experiences with engagement and action.” That guest experience, according to the company, is better integrated within a resort environment.

How SeaWorld’s guest experience will evolve

By combining upcharge experiences into a pick-and-choose adventure (as on a cruise ship), a visit to a SeaWorld Orlando fully integrated resort could soon look something like this:  An exclusive pre-opening swim at Discovery Cove with dolphins or in the reef, followed by a behind-the-scenes tour of SeaWorld’s rescue facility, VIP seating at the shows and front-of-line access on the rides – followed by a lunch break at the hotel, where you can meet SeaWorld’s animal ambassadors in the lobby, and an afternoon training session with a sea lion.  End the night with an exclusive luau for resort guests and night sliding at Aquatica, followed by drinks and dancing at SeaWorld’s entertainment complex.

The next day, it’s onto Tampa and Busch Gardens via SeaWorld’s animal themed shuttle for even more personalized adventures.  On the way there, a guide leads an interactive trivia competition about the animals they’ll see that day and shares videos of the conservation and rescue work done by SeaWorld and Busch Gardens.  It’s not an ordinary shuttle trip because they’re not staying at an ordinary hotel.

A number of these options I’ve mentioned are already offered by SeaWorld’s parks.  With the addition of a hotel themed to the resort, the dynamics of what’s offered change.  Within the fully integrated SeaWorld Resort of the future, guests will be engaged in the world of animals and nature from the time they check in until they head home, in a way custom tailored to the animals they want to meet and the experiences they want to have.

Joe Kleimanhttp://wwww.themedreality.com
Raised in San Diego on theme parks, zoos, and IMAX films, InPark's Senior Correspondent Joe Kleiman would expand his childhood loves into two decades as a projectionist and theater director within the giant screen industry. In addition to his work in commercial and museum operations, Joe has volunteered his time to animal husbandry at leading facilities in California and Texas and has played a leading management role for a number of performing arts companies. Joe previously served as News Editor and has remained a contributing author to InPark Magazine since 2011. HIs writing has also appeared in Sound & Communications, LF Examiner, Jim Hill Media, The Planetarian, Behind the Thrills, and MiceChat His blog, ThemedReality.com takes an unconventional look at the attractions industry. Follow on twitter @ThemesRenewed Joe lives in Sacramento, California with his wife, dog, and a ghost.
Share
Facebook
Twitter
Linkedin
Email
Print
WhatsApp
Pinterest
ReddIt
Tumblr
Previous articleJim Ogul on world’s fairs: Astana ’17 hires Hill International; expects 5 M visits
Next articleNeptune Benson Acquired by Evoqua Water Technologies