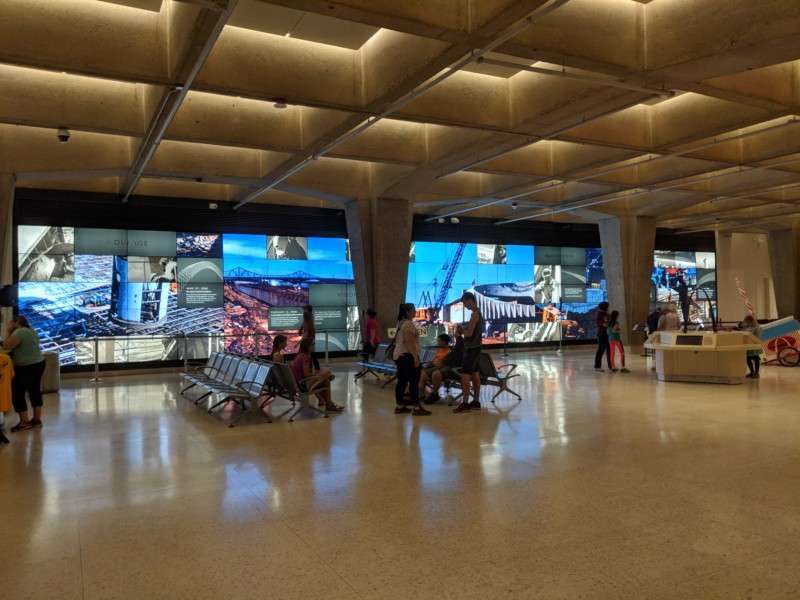 St. Louis, MO, USA — Not long before the grand re-opening of the museum at the Gateway Arch, Joshua Colover, CEO Aperture Films Ltd., treated us to a preview of the extensive media production work his company did on the project. Working closely with exhibit designer Haley Sharpe Design, integrator BBI and others on the team responsible for creating the re-imagined museum exhibits, Aperture produced all the media found throughout the guest experience – amounting to some 100 pieces.

InPark has been covering the St. Louis Gateway Arch refurbishment as it has been taking place over the past few years, with the July 3, 2018 grand re-opening of the museum as a major milestone. See more: interview with Haley Sharpe Design; the Arch tram ride system gets an engineering facelift; the Gateway Arch museum grand reopening.

The Arch museum media adventure begins with the arrival experience as visitors descend through the new, light-filled entrance and view multiple large-screens that invite them to feel part of historic westward journeys. Visitors continue within the six exhibit galleries of the museum proper, then in the queuing and pre-show areas of the “Journey to the Top” tram ride, and in the spacious lobby.

SLIDESHOW: Image of media installations at The Museum at the Gateway Arch courtesy Aperture Films.

With Colover as creative director, Aperture’s team pulled out pretty much everything in their toolbox as the job demanded. Their scope included live action, on-location filming around the United States with hundreds of period extras, and scripting (and editing and post production) for the series of large, standup blade screens encountered on the way in. As mentioned above, these initial screens show touchpoints and human drama of the historic journey westward. By playing with the visitor’s sense of scale, they foster a gradual immersion into the experience.

Moving into the new exhibit galleries, Aperture’s work included high-resolution photography for sweeping large-scale panoramas, a library of documentary films running in pocket theaters and within displays, and immersive map animations going deeper into journeys west. The Aperture team also furnished content for some 13 interactive kiosks that educate and entertain.

As visitors queue up and proceed to board cars for the “Journey to the Top” tram ride, which will take them inside the Arch structure to disembark in the observation area at the very top, and bring them down again afterward, they see a series of projections and animations evoking the culture and history of the 1960s when the Arch was first built and opened to the public. These were also custom produced by Aperture.

Screen sizes, projection platforms and media delivery cover a wide range of options according to what best suited the application and the location.

SLIDESHOW: Josh Colover of Aperture Films with some of his company’s work at the new Gateway Arch museum. Photos by Judith Rubin.

Aperture Films was founded by Colover two decades ago and is based in Irvine, California. The company is quite active in the museum sector, especially projects with a high public and tourism profile. Aperture’s work can be seen at such venues as the D-Day Museum in Normandy, Custer State Park and the National World War II Museum in New Orleans. Prior to founding Aperture, the British-American Colover worked several years with MacGillivray Freeman Films. He is an alumnus of NYU’s Tisch School of Arts. www.aperturefilms.com

The Gateway Arch in downtown St. Louis is a national icon designed by the late, pioneering architect Eero Saarinen. The $380 million renovation of the Arch grounds and its surrounding areas was sparked by the approach of the icon’s 50th anniversary, which took place in 2015. The project has been a historic partnership between the private sector and federal, state, and local government agencies. Core partners include the National Park Service, Missouri Department of Transportation, Great Rivers Greenway, Bi-State Development, Gateway Arch Park Foundation and Jefferson National Parks Association. The Michael Van Valkenburgh Associates team won the CityArchRiver International Design Competition with their comprehensive plan for transforming the Saint Louis Riverfront and Arch grounds.

Founded by the National Park Service in 1935 to commemorate Thomas Jefferson’s vision of a transcontinental United States, the Gateway Arch National Park (formerly known as the “Jefferson National Expansion Memorial”) stretches from the Old Courthouse to the steps overlooking the Mississippi River.

Joe Kleimanhttp://wwww.themedreality.com
Raised in San Diego on theme parks, zoos, and IMAX films, Joe Kleiman would expand his childhood loves into two decades as a projectionist and theater director within the giant screen industry. In addition to his work in commercial and museum operations, Joe has volunteered his time to animal husbandry at leading facilities in California and Texas and has played a leading management role for a number of performing arts companies. Joe has been News Editor and contributing author to InPark Magazine since 2011. HIs writing has also appeared in Sound & Communications, LF Examiner, Jim Hill Media, and MiceChat. His blog, ThemedReality.com takes an unconventional look at the attractions industry. Follow on twitter @ThemesRenewed Joe lives in Sacramento, California with his fiancé, two dogs, and a ghost.
Share
Facebook
Twitter
Linkedin
Email
Print
WhatsApp
Pinterest
ReddIt
Tumblr
Previous articleGateway Arch National Park reopens in St Louis with new interactive museum
Next articlePeanuts-themed dining arrives in Latin America with opening of Brazil’s Café Snoopy