Judith Rubin: For specialty cinema, Cosm and DomeX are signs of recovery and optimism 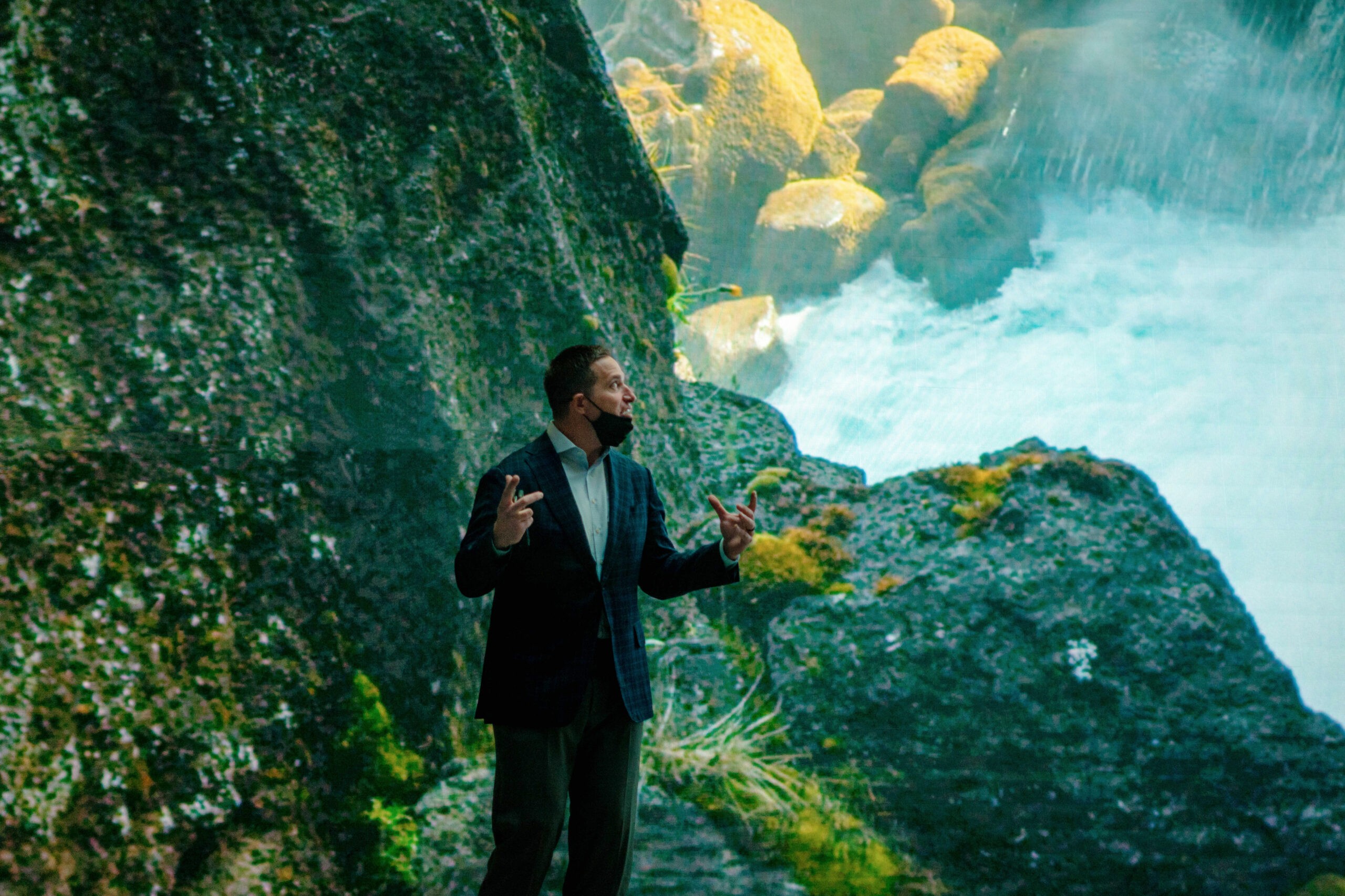 InPark editors have been active on the specialty cinema scene for many years. Not only have we consistently provided great coverage, we have directly participated: I held key roles with the Large Format Cinema Association (now part of GSCA) and IMERSA, helping to foster dialog between industry sectors. During his 20-year career in the industry Joe Kleiman (InPark senior correspondent) has served as an IMAX projectionist and theater manager at a number of locations across the US. (Meanwhile, executive editor Martin Palicki has been inside of more flying theaters than most people.)

Photo at top: Cosm CEO, Jeb Terry Jr., in front of the DomeX LED display while addressing the company virtually.

Specialty cinema developed in pods that came to overlap more and more with the advance of digital technology: giant screen theaters, motion simulation, 4D theaters, planetariums, flying theaters, world expo pavilions and now also VR. There’s been a convergence of content as well as technology as digital technology has fed this evolution, making it easier to share content across platforms and changing the way content is presented and produced.

The emergence of fulldome (digital dome) in planetariums, with the first permanent installations in the late 1990s, has been a very significant evolution/revolution. As specialty theaters have replaced film systems with digital systems, planetariums have replaced slideshows and starballs with fulldome playback systems and real-time image generation. With this sweeping change, planetariums became immersive digital theaters and part of the specialty cinema sector, opening up new possibilities, conversations and opportunities among storytellers, producers, exhibitors, system designers and distributors.

Fulldome has been transformative, making planetariums and dome theaters into some of the most sophisticated digital experience spaces on the planet, giving them more prominence in their respective institutions and sparking a revolution in content and presentation and a reshuffling in the larger specialty cinema industry. It touches other sectors as well, such as flying theaters, dark rides and VR.

E&S and Spitz, now part of the new company Cosm along with another acquisition, LiveLike VR, have long been active leaders in all of these markets as technology and content providers. We’ll be watching the next chapter of their story with great interest as they roll out the new LED-based DomeX and address the three primary verticals that CEO Jeb Terry Jr. outlined to us: science/education, theme parks/attractions and sports/entertainment – that last reflecting Terry’s background in sports, broadcast and VR.

According to Terry, Cosm will apply the concept of fandom to help grow all three verticals – sports fans are easy to identify, but there are also subject matter and tech enthusiasts that equate to being fans in the other sectors. They are emphasizing turnkey installations, with the DomeX demo set up and ready for visitors in Salt Lake City. But Terry also recognizes and speaks to the products’ potential applications for show production, immersive art exhibition, intellectual property (IP), custom content and real-time interactive media.

It looks like a fertile time for Cosm – and for all of us, after a year of pandemic life. Recovery is starting to be visible in the not-too-distant future. We eagerly move toward the time when people can again safely gather indoors and the industry can again welcome guests into theaters and immersive experiences. InPark will be there to learn and report. Our optimism is bolstered by the energy, timing and promise of this new business endeavor.

Judith Rubin
Judith Rubin ([email protected]) is a leading journalist, publicist, strategist, blogger, content marketing specialist and connector in the international attractions industry. She excels at writing about all aspects of design and technical design, production and project management. Areas of special interest include AV integration and show control, lighting design and acoustics, specialty cinema, digital video and world’s fairs. Judith has ties to numerous industry organizations. From 2005-2020 she ran communications, publications and social media for the Themed Entertainment Association (TEA). In 2013, she was honored with the TEA Service Award. She was development director of IMERSA, and co-chair of the 2014 IMERSA Summit. She was publicist for the Large Format Cinema Association in the 1990s, now part of the Giant Screen Cinema Association (GSCA) and has also contributed to the publications of PLASA, IAAPA and the International Planetarium Society. Already making her mark as a magazine and book editor, Judith joined World’s Fair magazine in 1987, which introduced her to the attractions industry. Launching as a freelancer in the mid 1990s she has contributed to dozens of publications and media outlets including Funworld, Lighting&Sound America, Sound & Communications, Urban Land, The Raconteur and The Planetarian. She joined InPark in 2010. Judith earned a Bachelor of Fine Arts from Pratt Institute. She has lived in New York City and the San Francisco Bay Area, and now makes her home in Saint Louis, where she is active in the local arts and theater community.
Share
Facebook
Twitter
Linkedin
Email
Print
WhatsApp
Pinterest
ReddIt
Tumblr
Previous article
InPark exclusive: Two new attractions grace the City of Sails
Next article
Holocaust & Humanity Center to Add New Exhibit at Union Terminal, Cincinnati