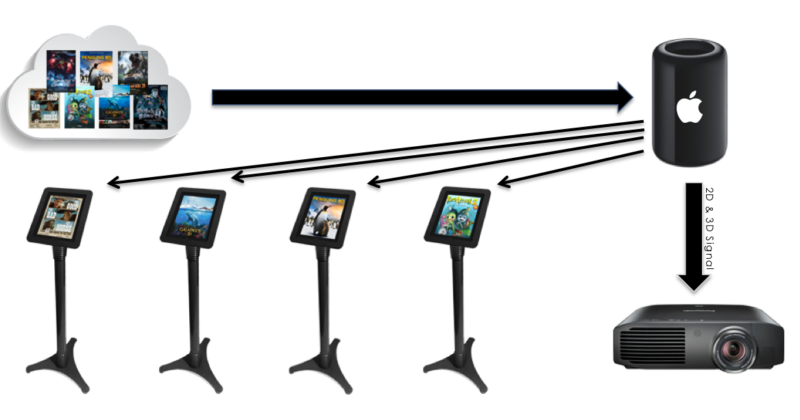 In the presentation by ETI co-leaders Roberta Perry and Brian Edwards, we were impressed by a super-responsive and versatile touchtable (you could “fling” things across it) with content that complemented the compelling high-definition images on the video monitor, the efficiently delivered 3D “iContent” from nWave in the adjoining demo theater, and the little, Videro-powered “black box” (a Mac mini or two) that is practically all the hardware necessary for running it all (you do still need projection gear, of course, but that’s also evolved in amazing ways).

This is the epitome of the disappearing rack room. But it’s not just about sleek, compact equipment, pixels and show control – it’s also about facilitating great, immersive storytelling and media-based guest experiences. ETI’s presentation made it clear we’ve reached the point where the screen essentially disappears too – the content moves effortlessly from platform to platform and the quality is consistent, regardless of exhibition format, projection surface or screen size. Losing the awareness of something being delivered or projected frees us to lose ourselves in the experience instead.

ETI has already done numerous real-world applications of the above, which is scalable up to very large venues and displays. Examples include the unique SEGA BBC Orbi center in Yokohama, Japan (a second Orbi will soon open in Osaka, to be followed by a third in Dubai), Discovery Cube Los Angeles and a variety of other themed entertainment, retail and hospitality venues.

Judith Rubin
Judith Rubin ([email protected]) is a leading journalist, publicist, strategist, blogger, content marketing specialist and connector in the international attractions industry. She excels at writing about all aspects of design and technical design, production and project management. Areas of special interest include AV integration and show control, lighting design and acoustics, specialty cinema, digital video and world’s fairs. Judith has ties to numerous industry organizations. From 2005-2020 she ran communications, publications and social media for the Themed Entertainment Association (TEA). In 2013, she was honored with the TEA Service Award. She was development director of IMERSA, and co-chair of the 2014 IMERSA Summit. She was publicist for the Large Format Cinema Association in the 1990s, now part of the Giant Screen Cinema Association (GSCA) and has also contributed to the publications of PLASA, IAAPA and the International Planetarium Society. Already making her mark as a magazine and book editor, Judith joined World’s Fair magazine in 1987, which introduced her to the attractions industry. Launching as a freelancer in the mid 1990s she has contributed to dozens of publications and media outlets including Funworld, Lighting&Sound America, Sound & Communications, Urban Land, The Raconteur and The Planetarian. She joined InPark in 2010. Judith earned a Bachelor of Fine Arts from Pratt Institute. She has lived in New York City and the San Francisco Bay Area, and now makes her home in Saint Louis, where she is active in the local arts and theater community.
Share
Facebook
Twitter
Linkedin
Email
Print
WhatsApp
Pinterest
ReddIt
Tumblr
Previous articleNassal Company Opens Los Angeles Office
Next articleICYMI: Top zoo & aquarium stories from InPark

The power of threes