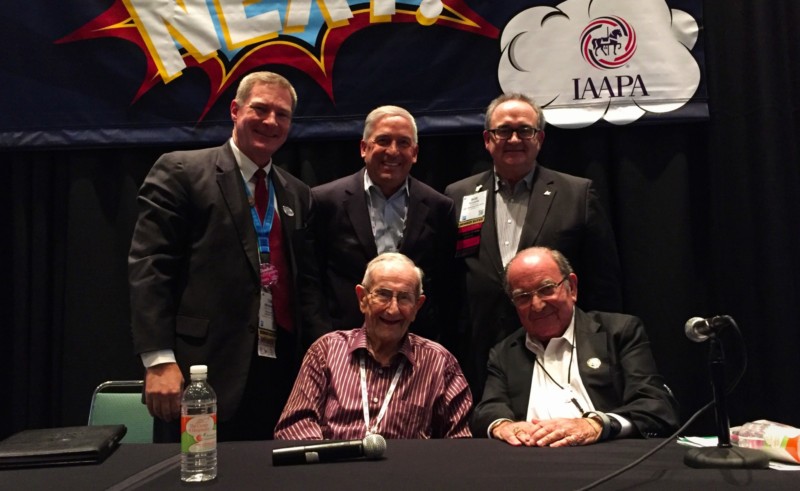 Bob Rogers, founder of BRC Imagination Arts is something of a themed entertainment industry legend and pioneer, with a career from Disney to multiple world expo pavilions to groundbreaking museum exhibitions and award winning corporate visitor centers, to say nothing of sitting on the Board of the Academy of Motion Picture Arts and Sciences. He’s a memorable speaker and – as one Legend knows another – for several years has moderated a “Legends” panel at the annual IAAPA Attractions Expo in Orlando.

The Nov 17, 2015 edition of “Legends” targeted Disneyland’s continuing influence on the theme park industry, on the 60th anniversary year of the park’s opening. On the panel were Disney Legend Marty Sklar; Matt Ouimet, president and CEO of Cedar Fair; and Disney Legend Jack Lindquist. Both Ouimet and Lindquist are former presidents of Disneyland Resort. Also on the panel: Tom Mehrmann, who recently announced he would soon step down as CEO of Ocean Park Hong Kong. He was never with Disney, but as former president of Knott’s Berry Farm, and with Ocean Park, has been in the position of heading parks that directly competed.

Rogers shared with InPark what he found to be some of the more interesting quotes and ideas that came forth in the discussion. “The Disney Revolution continues to influence and echo within the worldwide attractions industry,” he said. 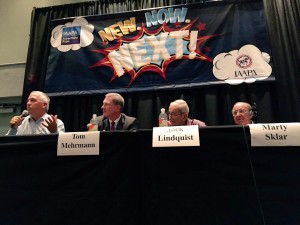 “All four talked about ‘generational value,'” said Rogers. “That is the tendency for parents to want to share the experiences of their own childhood with their children. This is an asset that some of the older, more beloved parks enjoy.”

Mehrmann and Ouimet referred to this also as “genetic vacation behavior” – “You have to be simultaneously relevant to your history but contemporary for today’s visitors,” said Ouimet. 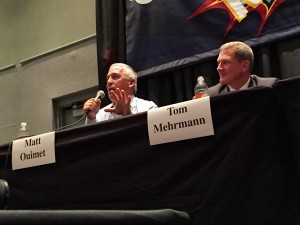 Fun on the job

“’Having fun should be fun,’” was Tom Mehrmann talking about the service objective of all employees,” said Rogers – “Or, as Marty Sklar put it, ‘If you’re not having fun in the fun business, you need to think about a career change.’”

“Jack Lindquist pointed out that ‘sponsors’ names can give an imaginary place a sense of authenticity,'” said Rogers. “He went on to explain that Disneyland’s Main Street

seemed all the more real because of the authenticity given it by names like Coca-Cola, Kodak, etc.”

“If you fail to take it to scale, short term you may save some cash, thus giving you the illusion that it is safer, but you actually increase the risk,” — Matt Ouimet

“You have to speculate to accumulate.” — Tom Mehrmann

“Matt and Tom were speaking of the temptation to under-execute a great idea in a way that fails to impress the market,” said Rogers. “The result is that a great idea fails because it wasn’t done right. All four Legends rather quickly added that this doesn’t mean budgets or schedules should be unlimited, with Matt saying, ‘The best creativity only happens under limitations.’”

Rogers observed that at a presentation earlier in the day, Joel Manby, new CEO of SeaWorld Parks and Entertainment (formerly with Herschend Family Entertainment), had said, “I have to first get their heart before I get their head,” a maxim that all four Legends on the panel endorsed.

Another point where all four were in harmony was career advice, summarized by Rogers as, “Don’t do it because you think you should. Do something you love instead.”

Judith Rubin
Judith Rubin ([email protected]) is a leading journalist, publicist, strategist, blogger, content marketing specialist and connector in the international attractions industry. She excels at writing about all aspects of design and technical design, production and project management. Areas of special interest include AV integration and show control, lighting design and acoustics, specialty cinema, digital video and world’s fairs. Judith has ties to numerous industry organizations. From 2005-2020 she ran communications, publications and social media for the Themed Entertainment Association (TEA). In 2013, she was honored with the TEA Service Award. She was development director of IMERSA, and co-chair of the 2014 IMERSA Summit. She was publicist for the Large Format Cinema Association in the 1990s, now part of the Giant Screen Cinema Association (GSCA) and has also contributed to the publications of PLASA, IAAPA and the International Planetarium Society. Already making her mark as a magazine and book editor, Judith joined World’s Fair magazine in 1987, which introduced her to the attractions industry. Launching as a freelancer in the mid 1990s she has contributed to dozens of publications and media outlets including Funworld, Lighting&Sound America, Sound & Communications, Urban Land, The Raconteur and The Planetarian. She joined InPark in 2010. Judith earned a Bachelor of Fine Arts from Pratt Institute. She has lived in New York City and the San Francisco Bay Area, and now makes her home in Saint Louis, where she is active in the local arts and theater community.
Share
Facebook
Twitter
Linkedin
Email
Print
WhatsApp
Pinterest
ReddIt
Tumblr
Previous articleMaking photo systems inexpensive
Next articleAmerican Wave Machines Brings Indoor Surfing Competition to New England During November