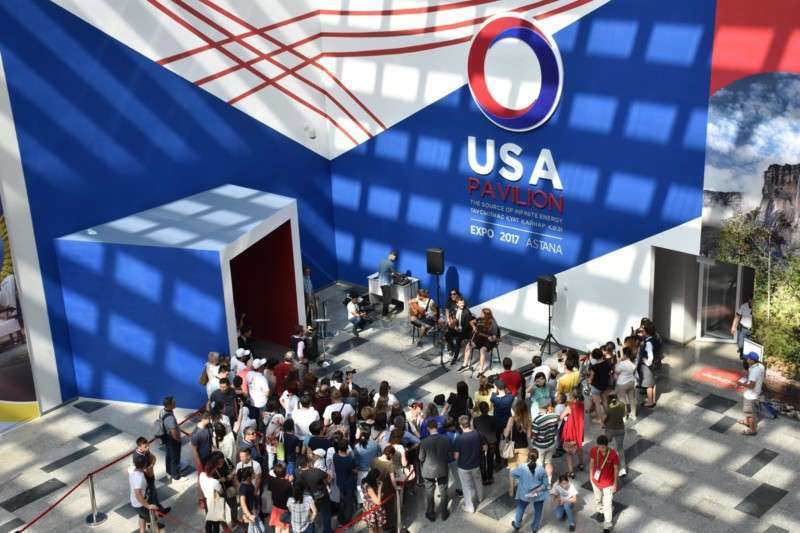 Astana Expo 2017 (Kazakhstan), which opened June 10 and closes September 10, recorded its three millionth visitor on August 25. Here are a few items of interest from Astana:

The U.S. came very close to not participating at all in Astana 2017. However, a substantial effort on the part of the US State Department and its private sector partner, USAP Expo 2017, succeeded in organizing a pavilion in less than eight months, fully funded with non-federal support. [see photo at top] The USA Pavilion at Astana 2017 reports having reached more than 400,000 people. In an innovative approach that advances the international diplomacy aspect of world’s fairs, the USA Pavilion instituted an exchange program wherein its Student Ambassadors change places with their counterparts at other pavilions. Exchanges have taken place with Switzerland, UAE, Thailand, Spain, Monaco and others.

Astana 2017, with a three-month duration, falls into the category of a  smaller Specialized Expo (according to the rules of the overseeing body, the Paris-based Bureau of International Exhibitions, or BIE).

Dubai Expo 2020 on the other hand will be a larger event and last six-months following its scheduled opening of 20 October, 2020. Its unique demographic model counts on 70% of its visitors coming from abroad. Recent data published by Dubai Economy has projected growth of five per cent and 5.1 per cent in 2017 and 2018, respectively with total Emirate tourists at 20 million during the Expo. More than 120 countries have committed to take part in the Expo. Since October 2016 the participation of countries including Italy, the United Kingdom, Indonesia, France, the Netherlands, New Zealand, Japan, Slovenia, Luxembourg, Greece, Tunisia and Kazakhstan had been announced.

In addition to countries, Dubai has so far signed agreements with seven Official Partners, most recently Accenture, which in collaboration with Etisalat Digital will assist in an array of projects related to connectivity and digital applications, ranging from information security and clients relations to virtual assistance and geo-location services.

Construction is well advanced on the three Theme Districts that form the core of the Expo site. Foundations are complete and buildings will begin to emerge in the third quarter of this year.  This year, $3.13 billion in Expo contracts is expected to be awarded. This includes the award, earlier this year, of a contract to Dubai-based Al-Futtaim Carillion worth $598 million.

Specialized Expos are scheduled between the larger events such as Dubai 2020, which are held every five years. Following Astana 2017, the next slot for an International Specialized Exposition is 2022/23. Minnesota (U.S.), Lodz (Poland) and Buenos Aires (Argentina) are competing. Following BIE inquiry missions to each proposed site. and presentations to the General Assembly of the BIE on 14 June 2017, each bidder is busy enlisting support for a final vote by the 170 Member States of the BIE at its General Assembly in November 2017. 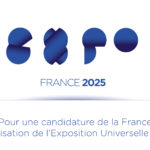 Next after Dubai 2020, four locations are competing to host Expo 2025, another of the larger, six-month world’s fairs:

These proposals were presented to the BIE General Assembly on 14 June 2017, which was the first opportunity for BIE Member States to hear from all four candidates.  The four candidates are due to submit their bid dossiers in September 2017, which will be followed by official BIE Enquiry Missions in early 2018. BIE Member States will vote for the host country of World Expo 2025 during the 164th General Assembly in November 2018.

The 2019 Horticultural Expo will be held in Yanqing District in Beijing from April 29 through October 7, 2019. The Expo theme is “Live Green, Live Better.” Expo 2019 comes under the auspices of both the BIE and the Association of Horticultural Producers (AIPH). Organizers are expecting over 16 million visitors and hope to attract 100 official participants (countries and international organizations as well as 100 non-official participants.

Recently a promotional event for the 2019 Beijing Horticultural Expo for Southern Pacific countries was held at Expo 2017 Astana where representatives from Southern Pacific countries including Fiji, Kiribati, Marshall Islands, Nauru, Samoa, Tonga, Papua New Guinea and Tuvalu attended. During the promotional event, Mr. Wang Jinzhen, Vice Chairman of the China Council for the Promotion of International Trade (CCPIT) and the Commissioner General of the 2019 Expo, spoke about the details of the upcoming 2019 Expo. The Netherlands, India and other countries have already sent teams to the Expo on field trips for survey and site selection. The 2019 Expo will provide a stage for countries around the world to demonstrate their horticultural industries, unique culture, tourism resources, products and technology, help Southern Pacific countries cooperate with China in terms of horticulture industries, economy and trade, and enhance the cultural understanding and friendship among different nations.