Geoff Thatcher: Gordo at the park 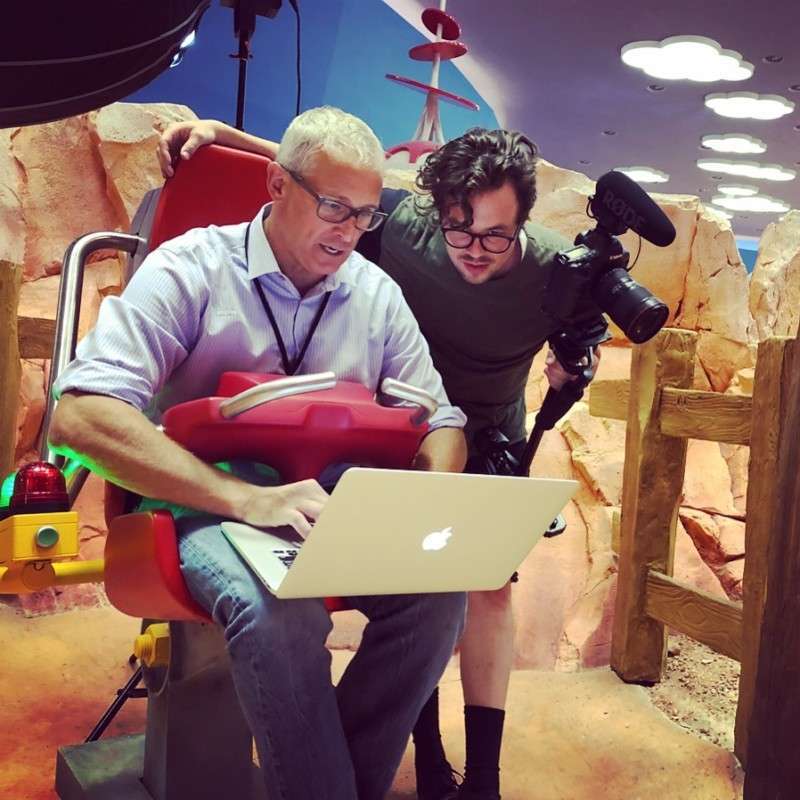 In late 2017 InPark profiled Geoff Thatcher and how he developed The Experience Model to help clients understand how to create successful attractions that resonate with guests [see “Former amusement park cleanup boy makes good,” InPark issue #70, November 2017]. In addition to working on projects around the world, Geoff has been writing a book honoring the great American regional amusement park, served with a slice of 1980s pop culture. The book will be published in early 2019.

Can you tell us a bit about the book’s storyline?

It’s about a skinny Baptist kid named Gordon who grew up playing and working at a fictitious amusement park in Kentucky called Lakeland Park. Right now, the working title is “Gordo at the Park,” but I really want to call it “Swim in Water Fit to Drink” because that was the advertising slogan at the amusement park’s swimming pool when I was a kid. However, people keep telling me that title doesn’t describe what the book is about, so maybe it will still be “Gordo at the Park.”

Is the book autobiographical?

As you may recall from the article last year, I’m a skinny Latter-day Saint kid who grew up playing and working at a very real amusement park in Utah called Lagoon. It’s a memoir of sorts, based on the 10 years working there as well as my experiences as a young regular at its million gallon swimming pool, penny arcade and rides. Let’s say it’s like Law & Order and just “based on a true story,” okay?

Lagoon park was my childhood playground. I wouldn’t be in this industry without my time at Lagoon. I learned so much working as a clean-up boy at the swimming pool, in rides and, finally, in the park’s entertainment department. I learned from some of the best in the industry: Peter Freed and his entire family, Boyd Jensen, Dick Andrew, Ron Van Woerden, Lori Capener and more.

Actually, this summer I was working on the grand opening of a new theme park in Abu Dhabi, and the General Manager (who also got his start as a teenager at a regional amusement park) gave several of us on the launch team name badges. I got emotional when I put a name badge back on for the first time since I left Lagoon in 1994.

Where do you see the smaller regional parks fitting into the theme park industry?

I would never claim to be an expert on themed entertainment economics, but smaller regional parks will thrive as long as they really understand who they are and invest in branding. And I’m not talking about advertising. I was lucky enough to spend half a day walking Holiday World with the late Will Koch, and he credited much of the park’s success and growth to branding. He knew what it meant to be “First for Family Fun.” I remember just being amazed when he talked about how branding influenced everything they did (and still do) at Holiday World. I think the parks that struggle don’t fully understand their audience and brand and how branding should influence every decision.

What have you learned about yourself and the industry while writing the book?

I’ve learned that writing the book is quite a process! I started it over 15 years ago, and I think one thing that I’ve learned is that it’s okay sometimes for projects to take a long time. Lagoon is known for its beautiful trees, and we all know trees don’t grow overnight. The commitment to towering trees requires a long-term view and patience. Some projects require exactly the same thing.

The other thing I’ve learned is that a lot of things have changed since 1982. One of the challenges of the book was how to authentically capture what it was like to work in an amusement park in the 1980s without offending today’s audience.

What do you mean by that?

One of the things I struggled with was how to authentically represent safety incidents—including some stupid decisions I made as a teenager (yes, I’ve still got the scars). Safety has always been a cornerstone of this industry, but times (and policies and procedures) were different back then. Similarly, there is a cultural awareness today about issues such as workplace sexual harassment and unofficial “gay days” at the park that were handled differently in the 1980s. I wanted to authentically represent the time period without appearing to be tone deaf to some really important issues.

What projects have you been working on recently?

I spent most of the summer in Abu Dhabi—what an incredible experience! One of the highlights was working with YouTube star and social media influencer Devin SuperTramp on a promo video for the project. That video is up to 4 million views on Facebook and is still going! I know people love to criticize social media, but it seems to me that in our industry, it’s a resource that is underutilized.

Working with a social media influencer is a fascinating experience because you have two video production crews. You have the video production crew that is shooting the video that’s going on Facebook, YouTube and Instagram and then you have the crew that’s shooting the influencer behind-the-scenes. At first, it’s a bit odd having someone constantly shooting video and stills of you working. However, I came to appreciate how valuable and easy it is for us today to document our lives. Personally, I wish there were more photographs of me working as a stuntman in the Wild West Shootout or as a zookeeper and train engineer back in the 1980s at Lagoon.

Geoff Thatcher makes a cameo appearance around the 10:30 mark

Also what’s both special and exhausting is the relationship these influencers have with their fans. Devin’s five million followers are real people. That’s why brands seek him, and other influencers, to partner with.

Since that project wrapped, I’ve been working on a brand experience project with Exhibit Concepts in Singapore for FM Global that’s really exciting. FM Global is a wellknown insurance company in our industry. We are using themed entertainment effects and digital technology, such as augmented and mixed-reality, to create a memorable experience. In one instance, we are using Technifex technology to place guests inside FM Global’s 60-foot tall fire lab at its research campus. We want people to feel the heat of the flames.

The themed entertainment industry truly has a great reach, from small regional parks like Lagoon to large brand experiences like this one. And I still think we’ve only scratched the surface when it comes to bringing themed entertainment to brand experiences. I recently pitched a giant oversized piñata—and I mean giant—to a CMO of a big Fortune 500 company and he smiled and said, “Oh man, I love it, but we aren’t quite ready.”

What’s next for Geoff Thatcher?

After this book, I’m thinking about social media. I’d love to create a series of videos on The Experience Model. It will be like a documentary, but posted in small increments over 24 months. Beyond that, I’m dreaming about working with my children. My oldest daughter Zoe has already worked with me on several projects. She just graduated from Auburn University, and is designing children’s costumes in St. Louis for Weissmans. It’s my dream to one day work with all my children. My son Joel is studying writing and themed entertainment at the Savannah College of Art & Design while our youngest is hoping to head to SCAD as well. She already knows more about attractions and coasters than most adults (seriously, she knows the details of every coaster and attraction manufacturer).

Where can people get a copy of your book?

Joe Kleimanhttp://wwww.themedreality.com
Raised in San Diego on theme parks, zoos, and IMAX films, InPark's Senior Correspondent Joe Kleiman would expand his childhood loves into two decades as a projectionist and theater director within the giant screen industry. In addition to his work in commercial and museum operations, Joe has volunteered his time to animal husbandry at leading facilities in California and Texas and has played a leading management role for a number of performing arts companies. Joe previously served as News Editor and has remained a contributing author to InPark Magazine since 2011. HIs writing has also appeared in Sound & Communications, LF Examiner, Jim Hill Media, The Planetarian, Behind the Thrills, and MiceChat His blog, ThemedReality.com takes an unconventional look at the attractions industry. Follow on twitter @ThemesRenewed Joe lives in Sacramento, California with his wife, dog, and a ghost.
Share
Facebook
Twitter
Linkedin
Email
Print
WhatsApp
Pinterest
ReddIt
Tumblr
Previous articlenFusion: Project management methodology
Next articleAlcorn McBride: Everyone loves a parade