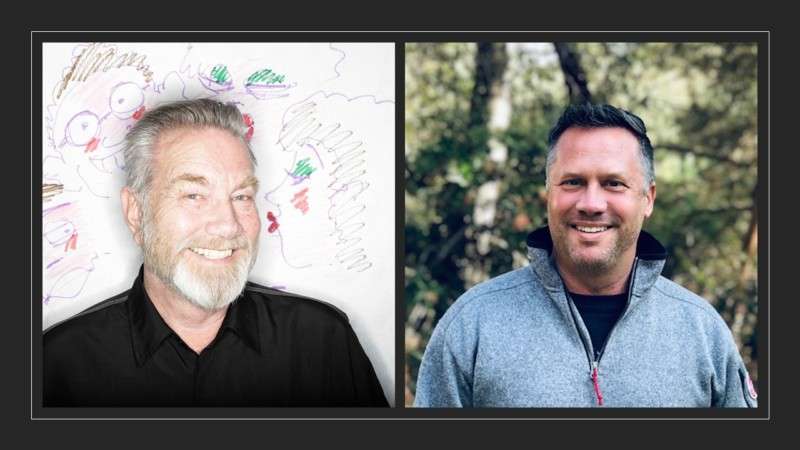 Jeremy Railton and Scott Ault have announced the launch of their new company Railton Entertainment Design (RED). Railton is an award winning themed entertainment designer whose honors include the Themed Entertainment Association (TEA) Buzz Price Thea Award for a Lifetime of Distinguished Achievements. Ault was one of the key leaders behind 20th Century Fox World projects, Lotte World’s Undersea Kingdom, and multiple Nickelodeon branded parks in China during his tenure as President and CEO of Rethink Leisure and Entertainment. InPark Magazine spoke with the partners about their new venture.

Tell us about your transition and the inspiration to start this new company.

I recently shut down my former company of 25 years, EDC, and sold my house in Los Angeles. In February 2019 I relocated to Three Rivers Nature Lodge, a wooded property I have owned for 30 years, north of LA in the foothills of the Sierras. It’s quite beautiful, 65 acres and full of wildlife, very inspiring and I’ve been making design improvements to it and running a guesthouse there.

The decision happened suddenly. I have stayed involved with the industry – I’m on the TEA Thea Awards Committee for life, one of the privileges of being a Thea lifetime honoree and participate fully in that process. (I’m very excited about this year’s slate of awards, which will be announced Nov 19 at the TEA booth during IAAPA.) But I’ve been feeling like there was unfinished business in regard to my design career.

I’ve known and respected Scott Ault for many years but hadn’t worked with him in some time. And a few weeks ago, he visited Three Rivers with Jefferson Eliot – who is now also part of the new company – and the idea popped out and it felt right, and RED was born. It all feels great, and just sort of easy. And beyond that, what really has been great is that every single person who’s heard about the new company has endorsed it and thinks Scott and I are a good mix.

How will the company operate?

It will be a boutique firm, run by professional, experienced designers and admin people. I’ll focus on conceptual design, while Scott – who is so balanced and assured and professional – focuses on the day-to-day and things like contracts. For me that’s a big part of the joy of this – that I can be focused solely on creative. It’s a position that I feel I have earned.

Our office location in the LA area will be decided and announced soon. As jobs land and things grow, we’ll expand and contract as most everybody does in the themed entertainment business. We’ll do what a design company does – which is conceive, design, draft, do the stories and narratives and color and style. We’ll respond to RFPs and build teams and sub out work to shops – fabricators and engineers and media producers and so forth. We’ll structure things so that clients get the personal attention they need.

I love the name RED – Scott came up with it, and the whole thing just feels great – it’s a color that communicates energy. Everything red is warm and fun, red wine for instance. And of course, it’s a good color for China.

There’s an idea I have had for a long time that is in some ways an extension of my most famous project, Crane Dance. If we can get one off the ground, it will be a beautiful thing and a nice follow up to the cranes.

Animal attractions are of course always very high on the list. But – as my career and portfolio will attest – there probably isn’t any design challenge that I wouldn’t go for if someone lays it down in front of me.

How did you end up partnering with Jeremy on the new venture?

Jeremy and I have known each other for over 25 years. We first worked together on the NFL Experience in 1992. When Jefferson Eliot started working for EDC earlier this year, I reached out to Jeremy to congratulate him on such a great hire. Jeremy and I started talking. At one point Jefferson suggested that Jeremy and I partner because our background and skills were so complimentary to each other. Jeremy and I both went “huh; that’s a really interesting idea!” About a month ago Jefferson and I visited Jeremy’s in-progress wilderness preserve (there is a whole Jeremy Railton design and development story there). Over the course of a few days’ meetings and a few glasses of wine, the idea for the new company took shape.

What sort of projects do you anticipate for the new studio?

Jeremy is a genius at conceiving sculptural icons that become destinations – the Cranes at Sentosa and Fremont Street Experience are just two examples. We will continue with that. But with my background in theme parks and attractions we will work there as well. Particularly, projects having globally recognized intellectual property will be a focus.

How would you compare this with some of your past ventures?

One of the primary differentiators is Jeremy! I’ve had the great honor to work with more than one recipient of TEA Thea lifetime honors – and even within that distinguished community, Jeremy is unique. I would also like to think that we, as a design firm, are collaborators. Many of the studios around have incredible talent and I hope that we can partner with them on making magic.

What’s the next step for someone interested in working with Railton Entertainment Design or wanting to discuss a project?

Call me or email me! ([email protected]) I’m happy to share a coffee and sit down to hear your ideas and dreams. We’ll be at IAAPA Expo 2019 in Orlando – contact us to set up a meeting.

Judith Rubin
Judith Rubin ([email protected]) is a leading journalist, publicist, strategist, blogger, content marketing specialist and connector in the international attractions industry. She excels at writing about all aspects of design and technical design, production and project management. Areas of special interest include AV integration and show control, lighting design and acoustics, specialty cinema, digital video and world’s fairs. Judith has ties to numerous industry organizations. From 2005-2020 she ran communications, publications and social media for the Themed Entertainment Association (TEA). In 2013, she was honored with the TEA Service Award. She was development director of IMERSA, and co-chair of the 2014 IMERSA Summit. She was publicist for the Large Format Cinema Association in the 1990s, now part of the Giant Screen Cinema Association (GSCA) and has also contributed to the publications of PLASA, IAAPA and the International Planetarium Society. Already making her mark as a magazine and book editor, Judith joined World’s Fair magazine in 1987, which introduced her to the attractions industry. Launching as a freelancer in the mid 1990s she has contributed to dozens of publications and media outlets including Funworld, Lighting&Sound America, Sound & Communications, Urban Land, The Raconteur and The Planetarian. She joined InPark in 2010. Judith earned a Bachelor of Fine Arts from Pratt Institute. She has lived in New York City and the San Francisco Bay Area, and now makes her home in Saint Louis, where she is active in the local arts and theater community.
Share
Facebook
Twitter
Linkedin
Email
Print
WhatsApp
Pinterest
ReddIt
Tumblr
Previous articleHolovis launching HoloTrac computer tracking technology at IAAPA Expo 2019
Next articleIreland’s Funtasia Theme Parks implements Semnox Parafait for cashless automation