[quote]These parks will create physical touchpoints for the consumers to make a different kind of connection with these worlds. They will be physical worlds – not just media worlds. Immersing you in a real world is the ultimate virtual reality.”[/quote]

[dropcap color=”#888″ type=”square”]2[/dropcap]0th Century Fox World Dubai is slated to open in 2018. Plans for the integrated theme park and resort were announced Nov 3 by Al Ahli Holding Group (AAHG) in an international licensing partnership with Twentieth Century Fox Consumer Products. Design and production services are being provided by Rethink Leisure & Entertainment. Intellectual properties (IPs) that will come to life in the park include The Simpsons, Planet of the Apes, Alien, Sons of Anarchy and Ice Age. Greg Lombardo (Senior Vice President of Global Live and Location Based Entertainment for Twentieth Century Fox) and Scott Ault (President and CEO, Rethink) talked about the project to InPark’s Judith Rubin and Martin Palicki.

Where is the project now in terms of the design process, bidding and staffing?

Scott Ault: Rethink signed a new lease to substantially expand office space as we staff up. We have four principals on each area of the park: show producer, creative director, art director and technical director. We’re almost at the point where all those have been hired. Rick Polizzi, who was producer of The Simpsons TV show for many years, is creative director of The Simpsons area. Joining him as art director is Karen Bauer, who was longtime color stylist on the show. We’re making similar hires for other areas of the parks – strategic hirings of people who have worked extensively with the IP. There is a lot of crossover from the film world to the theme park world, and the culture is similar.

How will the theme park build upon the IP to create compelling guest experiences?

GL: We know you have to tell a story and give a fantastic experience beyond the movie. These attractions will take a deeper dive into story with familiar environments and characters – not re-tellings, but new stories that live within the world of the IP. It’s such a rich opportunity – and we are talking about active franchises where new movies will be rolling out in the near future.

Is this kind of cross platforming a significant evolution for media companies?

GL: We’re in the contemporary content creation business. The way that people digest media is changing, and IP holders recognize that. One of the things to be aware of is how it differs from one geographic area to another. China, for instance, will have more cinemas than the US does within the next 5 years.

We are building these destinations from the ground up. We have the right team, and we take it seriously. It’s an amazing way to get 365-day-a-year engagement with an IP. With a franchised property that releases a new movie every 2 years, it creates a new body of consumers who fall in love with the brand. Here we are creating environments where people can feel themselves to be active participants. 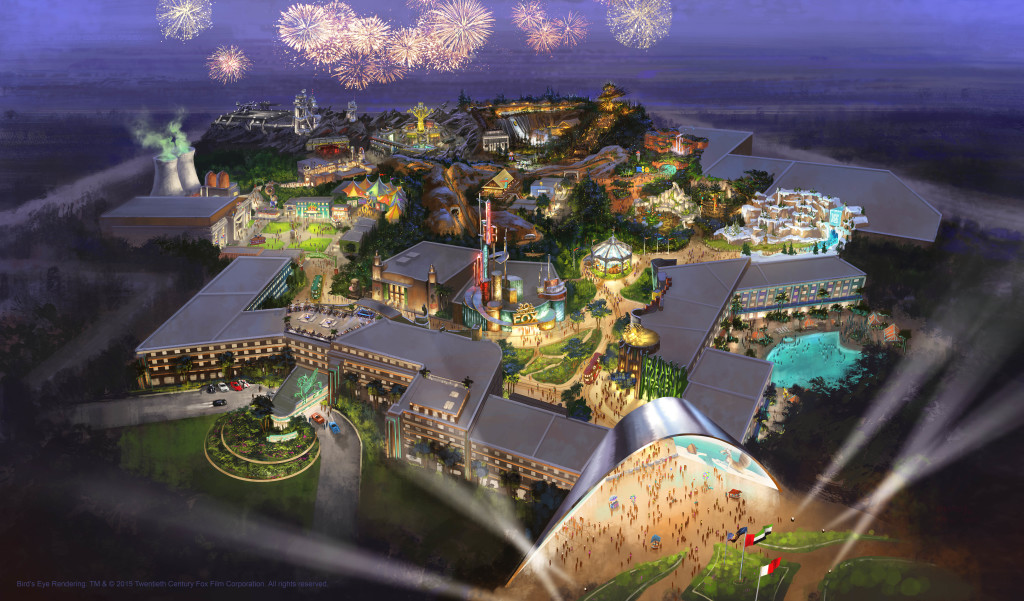 Will there be a lot of emphasis on the built environment?

SA: These parks will create physical touchpoints for the consumers to make a different kind of connection with these worlds. They will be physical worlds – not just media worlds. Immersing you in a real world is the ultimate virtual reality.

GL: Our industry can be over-reliant on media to do the heavy lifting in theme parks. But it’s so powerful to walk into that world literally and physically re-created, extending all the way to retail. To be able to sit down in the world of The Simpsons and actually eat a Krusty Burger, for instance. And as a parent, I know just how important it is to spend that time in a physical place, not watching your child watch a screen. There’s a diversity of experience – a fabric, with texture and pattern variation.

SA: It’s a powerful and unforgettable life experience to walk in with your kid and see them look around, wide-eyed.

Will there be a Titanic boat ride?

GL: There will not be a Titanic boat ride.

SA: We did a lot of benchmarking across parks around the world. Dubai is a major transport hub with a lot of international air traffic and long-term growth potential. The visitor base includes expatriates: Europeans, Filipinos and a large population from the subcontinent. It’s already a major shopping destination. Hotel rooms are increasing exponentially in anticipation of Dubai Expo 2020, and there will be a need to sustain the demand for those rooms after the world’s fair closes. The new theme parks in development, including Fox World, will help. Our partner Al-Ahli Holding Group is very thoughtful about that.

SA: The entire team at Rethink is honored to be working on this fantastic project, in one of the most exciting regions in the world. We are looking to create a world-class theme park destination unlike anything previously seen in the region.

Rick worked at Churchill Entertainment as a Dimensional Animator and Production Supervisor, on programs such as The Mouse and the Motorcycle, Ralph S. Mouse (ABC Weekend Specials), and Stanley and the Dinosaurs (Disney Channel). In 1996, Rick joined the production team of The Simpsons, serving as an Animation Producer for 16 seasons and over 350 episodes, for which he was recognized with three Primetime Emmy Awards. As an entertainer, Rick has performed with the L.A.-based improv group, The Groundlings and has voiced numerous characters for animated programs. He co-authored the coffee table book Spin Again (Chronicle Books) that was named “Cool Retro Book of the Year” by Entertainment Weekly.

David Aion started in the leisure attractions field in 1983 interfacing with architects, designers, theme park operators; museum, zoo and aquarium professionals, and general contractors on projects in the United States and in Singapore. Some of these projects have been for Resorts World – Singapore, The Natural History Museum of Los Angeles, California Science Center, and Universal Studios. David is currently a member of the Board of Directors of the Themed Entertainment Association. He has served on committees for IAAPA, AAM and AZA and is a lifetime member of the Digital Cinema Society.

Judith Rubin
Judith Rubin ([email protected]) is a leading journalist, publicist, strategist, blogger, content marketing specialist and connector in the international attractions industry. She excels at writing about all aspects of design and technical design, production and project management. Areas of special interest include AV integration and show control, lighting design and acoustics, specialty cinema, digital video and world’s fairs. Judith has ties to numerous industry organizations. From 2005-2020 she ran communications, publications and social media for the Themed Entertainment Association (TEA). In 2013, she was honored with the TEA Service Award. She was development director of IMERSA, and co-chair of the 2014 IMERSA Summit. She was publicist for the Large Format Cinema Association in the 1990s, now part of the Giant Screen Cinema Association (GSCA) and has also contributed to the publications of PLASA, IAAPA and the International Planetarium Society. Already making her mark as a magazine and book editor, Judith joined World’s Fair magazine in 1987, which introduced her to the attractions industry. Launching as a freelancer in the mid 1990s she has contributed to dozens of publications and media outlets including Funworld, Lighting&Sound America, Sound & Communications, Urban Land, The Raconteur and The Planetarian. She joined InPark in 2010. Judith earned a Bachelor of Fine Arts from Pratt Institute. She has lived in New York City and the San Francisco Bay Area, and now makes her home in Saint Louis, where she is active in the local arts and theater community.
Share
Facebook
Twitter
Linkedin
Email
Print
WhatsApp
Pinterest
ReddIt
Tumblr
Previous articleWith waterparks, sometimes technology floats just below the surface
Next articleMaking photo systems inexpensive