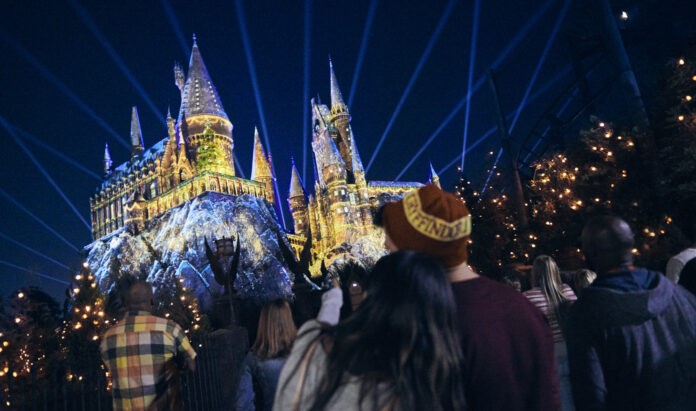 Universal Orlando Resort invites guests to unwrap the awesome and let loose this holiday season during its Holidays celebration, beginning November 12, 2022 and running daily through January 1, 2023. Throughout the entire destination, guests can join seasonal festivities featuring beloved pop culture stories and characters in experiences that range from traditional merriments to unique and irreverent twists on holiday classics.

Theme park guests can witness a spectacular transformation of Hogwarts Castle during “The Magic of Christmas at Hogwarts Castle” in The Wizarding World of Harry Potter – Hogsmeade; meet “the mean, green one himself” – the Grinch – during Grinchmas; watch larger-than-life balloons and floats take the streets during Universal’s Holiday Parade featuring Macy’s, and more.

Christmas in The Wizarding World of Harry Potter

The Wizarding World of Harry Potter will transform into wizarding wonderlands for the Holidays, complete with festive décor throughout the iconic streets of Hogsmeade and Diagon Alley that includes themed decorations, garlands and lights. Guests can also enjoy special holiday-themed performances from the Frog Choir, comprised of Hogwarts students and their giant croaking frogs in Hogsmeade, and the wizarding world’s most popular singing sensation, Celestina Warbeck and the Banshees, in Diagon Alley.

And once night falls in Hogsmeade, guests can revel in a projection spectacle of holiday spirit and Christmas moments inspired by the beloved “Harry Potter” stories in “The Magic of Christmas at Hogwarts Castle” at Universal’s Islands of Adventure.

Fan-favorite characters from Illumination’s Despicable Me and DreamWorks Animation’s Shrek and Madagascar – along with larger-than-life balloons, dozens of colorful holiday floats and hundreds of festive performers – will fill the streets of Universal Studios Florida during Universal’s Holiday Parade featuring Macy’s. Santa Claus also makes an appearance during the awe-inspiring parade – leading a finale that culminates with the lighting of the park’s 80-foot Christmas tree.

Grinchmas at Universal’s Islands of Adventure

The spirit of Grinchmas comes to life at Universal’s Islands of Adventure with the “Grinchmas Who-liday Spectacular” – a live retelling of Dr. Seuss’s holiday classic starring the maven of mischief himself, the Grinch.

Mannheim Steamroller returns to Universal Studios Florida to fill the air with the iconic sounds of the season with live performances on December 3, 4, 10 and 11.