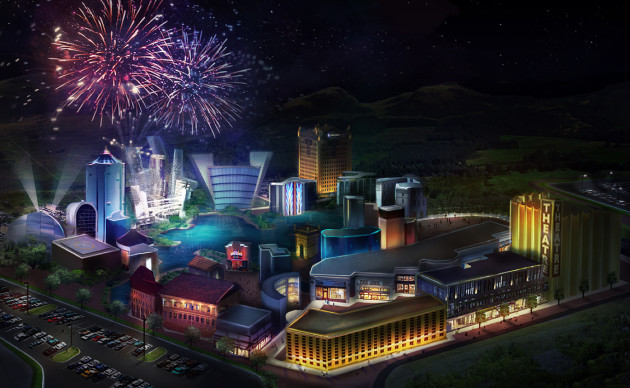 Leading design on the new park are Ryan Miziker and Charlotte Huggins of Miziker Entertainment Group, in the respective roles of Director of Attraction Development and Director of Attraction Media. Also working on design of Avatron Park are Wyatt Design Group and  Rethink Leisure and Entertainment, which recently announced its role in designing the 20th Century Fox World theme park for Dubai.

The park will have numerous attractions, many based on properties licensed from Lionsgate.  These include “Hunger Games,” “Step Up,” “Now You See Me,” and an option on the “Twilight” series.

In describing attractions under development, Garrett mentioned that one which fits six people involves each person having their own unique experience: “One person could go through it six times and never repeat themselves. Literally, you’re traveling through a movie and the movement of the apparatus you’re traveling in, the movie that surrounds you, it all creates the suspension of reality. That’s what this is going to be about.”

Avatron is also in talks to license video game and toy IP and is working on creating its own intellectual property for the park.  “For the Avatron brand to have long-term value and long-term recognition, we need to be building our own set of characters that people will adopt.”

Accompanying the theme park will be 500 rooms in two themed hotels and 300,000 feet of retail space in a Citywalk-type venue.  The lodging and retail areas will be designed to compliment both the theme and technology of the park.

The result of a Georgia tourism act which subsidizes new attractions within the state, the company expects to hire 2,400 full time employees and receive 2.5 million guests its first year of operation.

Fox in Dubai Part 1 and Part 2

Joe Kleimanhttp://wwww.themedreality.com
Raised in San Diego on theme parks, zoos, and IMAX films, Joe Kleiman would expand his childhood loves into two decades as a projectionist and theater director within the giant screen industry. In addition to his work in commercial and museum operations, Joe has volunteered his time to animal husbandry at leading facilities in California and Texas and has played a leading management role for a number of performing arts companies. Joe has been News Editor and contributing author to InPark Magazine since 2011. HIs writing has also appeared in Sound & Communications, LF Examiner, Jim Hill Media, and MiceChat. His blog, ThemedReality.com takes an unconventional look at the attractions industry. Follow on twitter @ThemesRenewed Joe lives in Sacramento, California with his fiancé, two dogs, and a ghost.
Share
Facebook
Twitter
Linkedin
Email
Print
WhatsApp
Pinterest
ReddIt
Tumblr
Previous articleEUROPE REPORT — Magical New Attractions Headed to Efteling and Thorpe Park
Next articleLagotronics Projects Partners with Ride Entertainment on Theme Park Projects