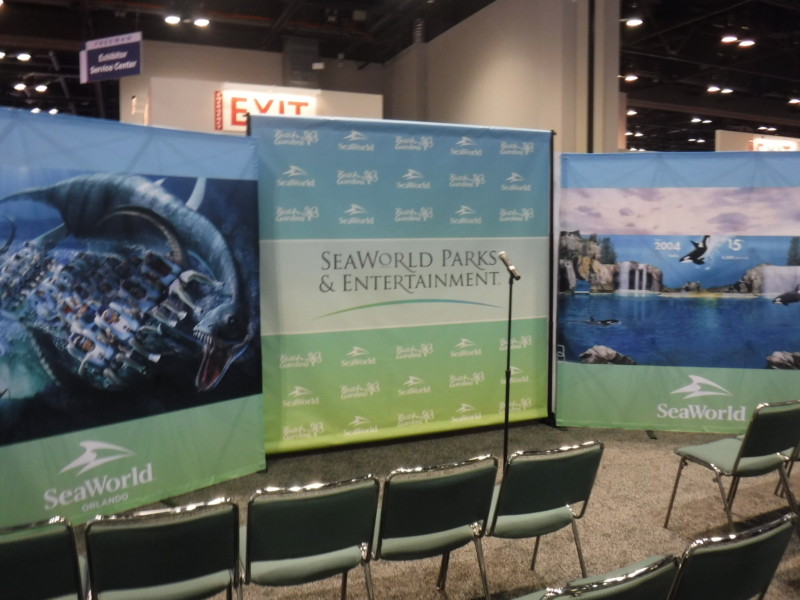 On the opening day of the IAAPA Attractions Expo, SeaWorld Parks & Entertainment President & CEO Joel Manby showed up at a morning press event beaming. The company’s Busch Gardens Tampa Bay animal theme park had just been announced as the 18th recipient of the prestigious Liseberg Applause Award, a biannual award that recognizes excellence and inspiration in the amusement and theme park industry worldwide.

Manby and the team from SeaWorld Parks & Entertainment and its new Deep Blue Creative design studio were on hand to unveil ride vehicles and give additional details on five SeaWorld attractions. 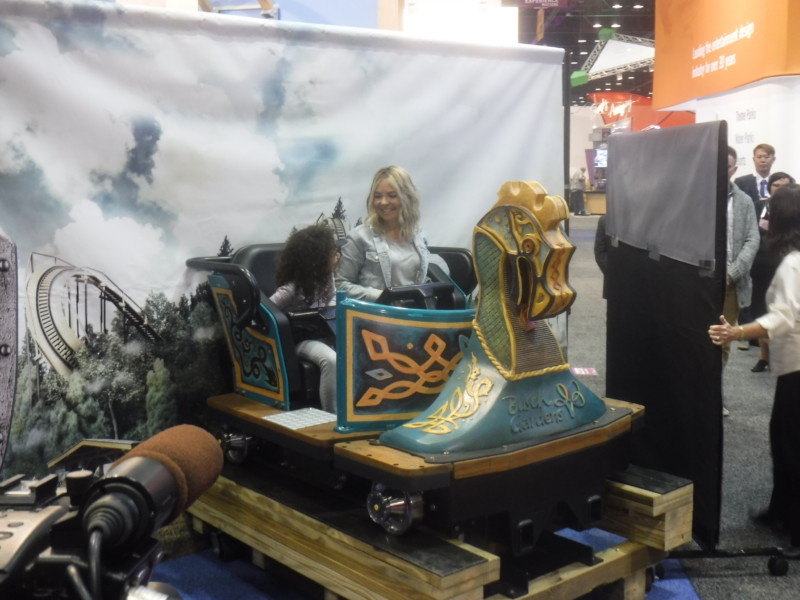 2002 Applause Award winner Busch Gardens Williamsburg is currently going vertical on its first wooden coaster – Invadr. Manufactured by Great Coasters International (GCI), the coaster will travel through the park’s Virginia woodlands and will feature a 74-foot initial drop and nine hills.  Guests will have the opportunity to choose from two coaster themes – invading Vikings or defending villagers.

At SeaWorld San Antonio, the SeaWorld television show Sea Rescue is the inspiration for a jet ski-themed family launch coaster from Intamin – Wave Breaker: The Rescue Coaster. The dual-launch coaster will send riders down the track at 38 and 44 miles per hour. The unique train features design elements specified by SeaWorld and the ride differs from other Intamin jet ski coasters in that most of its track will be over the water of the park’s existing central lake, reaching heights of up to 60 feet. The ride’s storyline has guests racing on jet skis to assist SeaWorld rescue team members. Three different species of animals that SeaWorld rescues and rehabilitates will be featured in both the preshow and post-show areas.

(SeaWorld has been evolving its corporate structure and long term creative and development plans over the past several years – see “The Road to Blue World” from IPM issue #59, and “FIR not FUR” from April 2016, both by Joe Kleiman; and “Making Mako” from IPM issue #63, by Martin Palicki.)

SeaWorld Orlando’s Kraken, a B&M floorless coaster, will be getting a virtual reality (VR) overlay. Samsung VR will be used on the track, although the headsets will be tethered for safety and operational purposes. The refreshed attraction will take guests into a 360-degree virtual world inhabited by prehistoric underwater beasts.

SeaWorld San Diego will roll out two new attractions in 2017. First is Orca Encounter. Shamu stadium will be redesigned with a new, giant LED screen surrounded by scenic elements representing trees, rock formations, and fountains found along the coast of the Pacific Northwest. According to Mike Denninger, VP of Theme Park Development at Deep Blue Creative, Orca Encounter will not be a show, but rather a multimedia immersion that allows guests a sense of how orcas experience the wild. It will utilize graphics, videos, live behaviors, and lighting and sound cues spread throughout the stage, main pool area, and grandstand.

Ocean Explorer’s three-minute, interactive dark ride will take guests on a trip through both physical sets and digitally projected environments as they assist marine biologists in collecting data about animals in the world’s oceans. Each seat will feature a highly intuitive touchscreen, with quizzes and activities available in four languages. The system will initially have guests repeat a code to determine their level of comprehension and will monitor feedback throughout, adjusting the difficulty accordingly, to facilitate a wide range of guest engagement and ages all enjoying the experience at a level that works for them.

As Busch Gardens received the Applause Award for its excellence and inspiration of its guests, SeaWorld Parks & Entertainment plans to embody those values throughout the company’s properties, with park and resort concepts that inspire guests to care about the natural world.  In 2017, the company will make a substantial investment in attractions to implement a three-year development plan.

The importance of bringing more creative talent onboard was also voiced during SeaWorld’s press event. Manby told the crowd of journalists and bloggers, “We are one year into a three-year plan of accomplishing our mission, and our new mission is creating experiences that matter. We not only want to have a lot of fun in our parks – and we want our guests to have a lot of fun – but we also want them to help make the world a better place.  So the challenge is experiences that matter, because our vision as a company is to inspire people to help animals and the natural wonders of the world. If we can create an army of our millions of customers and thousands of employees, it will be an incredible combination.”

Joe Kleimanhttp://wwww.themedreality.com
Raised in San Diego on theme parks, zoos, and IMAX films, InPark's Senior Correspondent Joe Kleiman would expand his childhood loves into two decades as a projectionist and theater director within the giant screen industry. In addition to his work in commercial and museum operations, Joe has volunteered his time to animal husbandry at leading facilities in California and Texas and has played a leading management role for a number of performing arts companies. Joe previously served as News Editor and has remained a contributing author to InPark Magazine since 2011. HIs writing has also appeared in Sound & Communications, LF Examiner, Jim Hill Media, The Planetarian, Behind the Thrills, and MiceChat His blog, ThemedReality.com takes an unconventional look at the attractions industry. Follow on twitter @ThemesRenewed Joe lives in Sacramento, California with his wife, dog, and a ghost.
Share
Facebook
Twitter
Linkedin
Email
Print
WhatsApp
Pinterest
ReddIt
Tumblr
Previous articleWhiteWater Awarded IAAPA Brass Ring for Mat Blaster and Smart Blast
Next articleGroundbreaking Takes Place for Ennead Architects’ 42,000 Square Foot Shanghai Planetarium