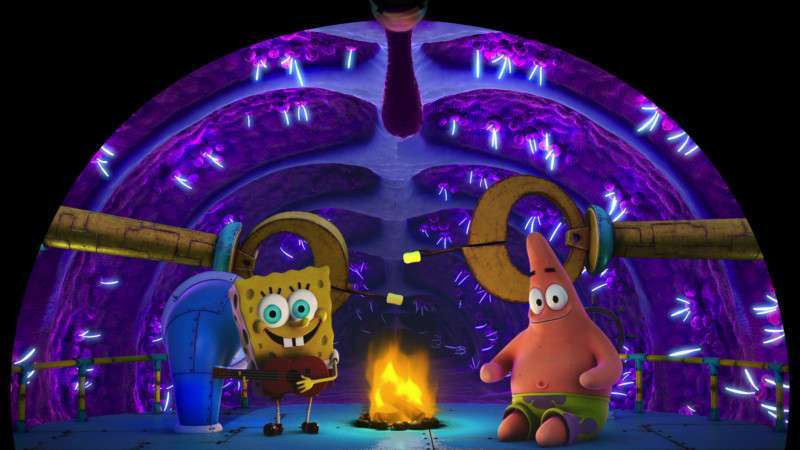 A former marine biology teacher, Hillenburg created the beloved cartoon character and his underwater universe for Nickelodeon, which premiered in 1999. He passed away November 26 from ALS.

SpongeBob became a leading fixture at theme parks around the world, including Mall of America in Minnesota, Paramount Parks, Blackpool Pleasure Beach, and Unviversal Studios theme parks. SpongeBob-themed attractions are currently in the works for Nickelodeon-themed parks in New Jersey and China.

SPONGEBOB SQUAREPANTS 3D (2003) A Blur Studios production for Nickelodeon, Paramount Parks, and Attraction Media & Entertainment. The ridefilm premiered in the Action Theater at Paramount Parks and had been distributed to other venues under the title “SpongeBob SquarePants 4D”

SPONGEBOB SQUAREPANTS 4D: THE GREAT JELLY RESCUE (2013) A co-production of Super 78 and Nickelodeon, the film held its world premiere at the Nickelodeon Suites Resort in Orlando. It is distributed by Simex-Iwerks.

An appreciation of Hillenburg by Los Angeles Time television critic Robert Lloyd can be found here.

InPark invites those who worked with Hillenburg to share their memories and reflections on working with him and his creations, which will be added to this article, by writing us at [email protected]

Joe Kleimanhttp://wwww.themedreality.com
Raised in San Diego on theme parks, zoos, and IMAX films, InPark's Senior Correspondent Joe Kleiman would expand his childhood loves into two decades as a projectionist and theater director within the giant screen industry. In addition to his work in commercial and museum operations, Joe has volunteered his time to animal husbandry at leading facilities in California and Texas and has played a leading management role for a number of performing arts companies. Joe previously served as News Editor and has remained a contributing author to InPark Magazine since 2011. HIs writing has also appeared in Sound & Communications, LF Examiner, Jim Hill Media, The Planetarian, Behind the Thrills, and MiceChat His blog, ThemedReality.com takes an unconventional look at the attractions industry. Follow on twitter @ThemesRenewed Joe lives in Sacramento, California with his wife, dog, and a ghost.
Share
Facebook
Twitter
Linkedin
Email
Print
WhatsApp
Pinterest
ReddIt
Tumblr
Previous article2018 IAAPA Brass Ring winners showcase international excellence in marketing, products, and shows
Next articleChance Rides receives IAAPA Brass Ring Award for Electric C.P. Huntington train