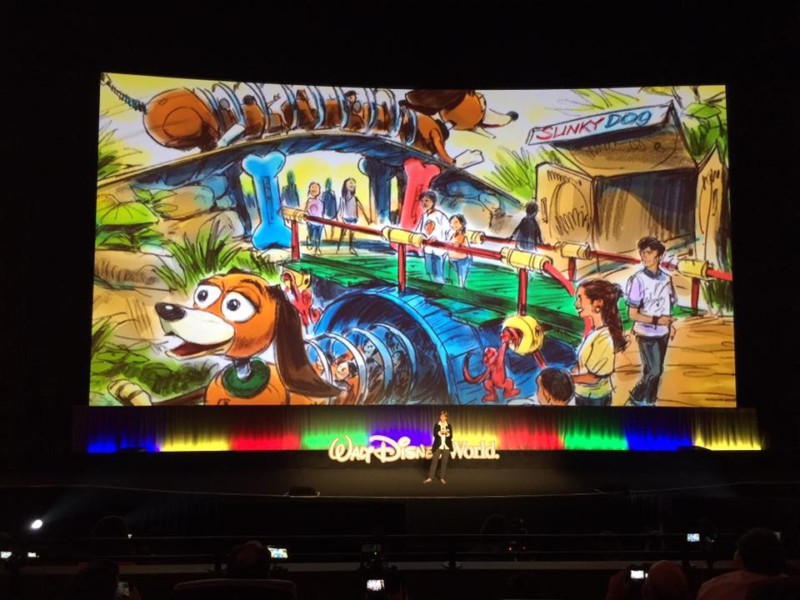 InPark Magazine was pleased to join a group of journalists and travel professionals hosted by Disney for the “Awaken Summer” media preview, a 3-day event at Walt Disney World Resort in Orlando, to help bring us up to speed and share with our audiences on what Disney is rolling out at theme parks, on movie screens and vacation experiences.

We recognized some fellow industry writers there – including Art Levine of About.com, and Jeremy Schoolfield of Funworld. Many in the group were local to Florida or from New York, tied to WDW target markets. They included mom bloggers, television reporters and travel and tourism specialists. We enjoyed meeting Stephen Silverman, reporting for Newsweek; video game expert Rick Dakan, who teaches creative writing at Ringling College of Art & Design and was there reporting for the Sarasota Herald-Tribune, mom blogger/brand influencer Vera Sweeney, Margaret Word Burnside of Tampa Bay Magazine, Sandra Chambers of Southern Traveller and Cheryl Rosen of Travel Market Report, among others. It adds to the interest to see the wide range to whom Disney reaches out for these events, and how they approach the subject in comparison to my industry POV. We learn from one another.

Three areas of Disney Springs, the re-imagined and expanded retail and entertainment zone formerly known as Downtown Disney, were open: The Landing, the Marketplace and The West Side. The fourth and final Town Center, featuring high-end retail and Spanish revival type architecture, will follow this summer. The mix of restaurants, stores and products made me think of lobster mac and cheese – the perfect combination of highbrow and lowbrow Americana – a good fit for the mix of locals and tourists strolling down its wide avenues. The number of shops, restaurants and other venues is being doubled to 150, complete with food trucks on the waterfront. Food and drink at Morimoto Asia were very good.

Our saunter through Disney Springs was easy on the ears and we imagine this speaks to the overall tech upgrade that came with the Magic Band enterprise. Presumably decibel levels rise in the evenings, and possibly will also when more facilities and features open to the public – but we applaud the lack of roar. (We imagine a mom- or grandma-blogger would agree.) It was easy on the eyes as well – lots of water and sky open to view. It’s a low-rise pedestrian mall, not a downtown. Star Wars retail stores and Starbucks franchises are found in two locations at Disney Springs and interestingly across from one another in one instance, and side by side in the other.

Cirque du Soleil’s long running show La Nouba is in The West Side zone of Disney Springs and has been refreshed with two new opening acts. The first highlights break dancing from three “B-Boys” and the second a romantic aerialist performance in the “Aerial Bamboo” style. In a magnificent highbrow/lowbrow touch, the stunning female aerialist’s silk falls and is caught by the commonplace cleaning lady character. It has all the Cirque hallmarks, while also fitting the location.

George A. Kalogridis, president of Walt Disney World Resort, welcomed us during a reception at Disney Hollywood Studios. Fellow writer Rona Gindin and I discussed the current trend to design spaces for multi-use in order to serve special events markets. According to Rona, who writes for Edible Orlando and Winter Park Magazine, this trend extends even to laser tag and indoor go-kart attractions in Orlando.

We enjoyed ringside standing for the nighttime “Star Wars Symphony in the Stars,” a stellar combination of pyrotechnics and John Williams music. As enjoyable as this show was, we’re told to expect something even more impressive when the new version, “Star Wars: A Galactic Spectacular,” opens in June, multimedia effects including a tower of fire, light

sabers in the sky and projection mapping that will turn the Chinese Theater and other buildings into Star Wars vistas.

Our daytime Star Wars treat was VIP standing room for “Star Wars: A Galaxy Far, Far Away Stage Show” at Disney’s Hollywood Studios, which uses a straightforward, vignette presentation that pleases the photo-seeking crowd: costumed characters striking poses and making signature statements before a video montage of Star Wars clips. We feel the force of IP and cross platforming. This reinforces a consistency of the licensed characters in whatever form or platform they are encountered, so that essentially there are multiple portals by which a person may enter the Star Wars universe and still feel the story and characters in a consistent manner – whether first coming through toys, video games, theme park attraction or movie going.

At a later forum, Scott Trowbridge, creative portfolio executive, Walt Disney Imagineering, talked about what would be delivered via the new, 14-acre Star Wars lands at Disney parks sometime in a future not too far, far off… “We’re building a whole new planet where you can live your own Star Wars story,” he said, citing two signature attractions that would “push the boundaries”: the first will let guests step aboard the Millennium Falcon and pilot it; the second will let them experience a battle between the dark side and the light in an epic battle. There will also be abundant opportunities to create one’s own Star Wars experience in a highly themed environment that goes far beyond the old “exit through retail.” As Trowbridge says, “Who hasn’t wanted to visit Star Wars Central, sample the food, meet the locals, hear the stories.” We were shown a picture of R2 D2 helping out at the construction site.

At Epcot we experienced noblesse oblige as the bedecked princesses of “Frozen” bestowed their sisterly graciousness on the group and we learned about the new Frozen Ever After attraction opening summer 2016 in the Norway Pavilion. Guests will take a boat ride to Elsa’s ice palace and meet the royal sisters in their summer cabin in the Kingdom of Arendelle. This is the first Frozen-themed attraction.

Jason Grandt, senior show writer, Walt Disney Imagineering shared some information about the soon-to-open Epcot update of the pioneering Soarin’ attraction, three years in the remaking as Soarin’ Around the World. It will premiere first at Disney Shanghai’s grand opening in a few weeks; at Epcot, the refresh will include a third theater and new digital projection system. The popularity of Soarin’ has inspired creatives, operators and ride manufacturers around the world to try to capture some of that airborne magic with flying attractions of their own.

Laura Anders Lee, present on behalf of Where Orlando magazine, treated me to a spontaneous tour through some of her favorite places at Epcot, which is in the midst of the International Flower and Garden Festival. Her remarks conveyed a strong sense of how this part of Walt Disney World is a cultural resource for local families and adults, providing many opportunities for recreation, socializing and informal learning, and holiday activities, as well as a sunny afternoon constitutional. Between the Flower and Garden Festival, essentially a pop-up botanical garden, and its counterpart later in the year, the International Food & Wine Festival, there’s an ever changing menu of activities to underscore the value of a season pass. And at Epcot as well as at the other lands of the resort, as well as the ships of Disney Cruise Line, there’s increasing tie-in of Disney IP and no lack of good matches for same.

We’re seeing impressive synergies – not just of IP, venue and experience, but synergies that touch guest experience in a way designed to deepen brand loyalty while also letting Disney make the most of its expanding range of properties and services and what it knows about its customers. Whether on land or sea, in a hotel, theme park, resort or in transit from one to the other, a guest can have an experience that is Disney from soup to nuts. And the Magic Band facilitates personalization to the extent that each guest can be greeted and served in specific ways on Disney property, and the benefits add up. The guest who is, for instance, a member of the Disney Vacation Club may quietly enjoy VIP status at a Disney theme park, greeted by name and invited to enjoy special perks.

We got an extended taste of Disney’s Animal Kingdom after dark complete with live music and performers. We experienced Kilimanjaro Safaris, the Tree of Life and a preview of “Rivers of Light,” a multimedia spectacular on the water. “Rivers” is still in development and there was a sizable crowd beyond our press group in the amphitheater to see the segment we were shown, which took inspiration from the Northern Lights – Disney creatives present included Disney’s Animal Kingdom mastermind Joe Rohde (SVP Creative, Walt Disney Imagineering) who introduced “Rivers,” as well as Michael Jung (VP, Theatrical Development, Walt Disney Imagineering). We also spotted a media producer and tech specialist or two…

At a subsequent forum headed by Walt Disney Resorts Chair Bob Chapek, Rohde was joined by John Landau, COO of Lightstorm Entertainment to talk about Pandora, the land themed on the movie Avatar, set to open in 2017 at Disney’s Animal Kingdom. (We sense synergy, as three Avatar movie sequels are now planned.) We were assured that the new land would meet expectation in its level of detail, realism and immersion. “It’s the details that made the movie believable – of plants, flora and fauna,” said Landau.

“It’s not merely a question of landscape – Pandora is a place you will sense is alive, with indigenous people,” said Rohde. Landau reminded us that the movie opens and closes with the image of protagonist Jake’s eyes opening, and that image of awareness underscores the core message of Disney’s Animal Kingdom – that what we do affects others.

At that same forum, Cathy Mangum, SVP of Walt Disney Imagineering, filled us in on some new Toy Story attractions coming to Disney Hollywood Studios, including two that will let guests step into the world of Toy Story and hang out with the toys, and a new Toy Story Mania 4D experience.

New experiences and attractions for Walt Disney World in 2016

Rick Rothschild and the next generation of immersive attractions

Judith Rubin
Judith Rubin ([email protected]) is a leading journalist, publicist, strategist, blogger, content marketing specialist and connector in the international attractions industry. She excels at writing about all aspects of design and technical design, production and project management. Areas of special interest include AV integration and show control, lighting design and acoustics, specialty cinema, digital video and world’s fairs. Judith has ties to numerous industry organizations. From 2005-2020 she ran communications, publications and social media for the Themed Entertainment Association (TEA). In 2013, she was honored with the TEA Service Award. She was development director of IMERSA, and co-chair of the 2014 IMERSA Summit. She was publicist for the Large Format Cinema Association in the 1990s, now part of the Giant Screen Cinema Association (GSCA) and has also contributed to the publications of PLASA, IAAPA and the International Planetarium Society. Already making her mark as a magazine and book editor, Judith joined World’s Fair magazine in 1987, which introduced her to the attractions industry. Launching as a freelancer in the mid 1990s she has contributed to dozens of publications and media outlets including Funworld, Lighting&Sound America, Sound & Communications, Urban Land, The Raconteur and The Planetarian. She joined InPark in 2010. Judith earned a Bachelor of Fine Arts from Pratt Institute. She has lived in New York City and the San Francisco Bay Area, and now makes her home in Saint Louis, where she is active in the local arts and theater community.
Share
Facebook
Twitter
Linkedin
Email
Print
WhatsApp
Pinterest
ReddIt
Tumblr
Previous articleCarnegie Science Center Launches SPARK! Campaign to Expand Facility, Programs, and Young Minds
Next articleJack Rouse Associates Designs Museum Where Receiving SPAM is a Great Thing