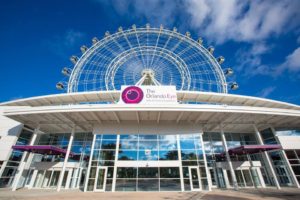 Another IAAPA Attractions Expo  has come and gone in Orlando. The annual convention has nearly reached the century mark, and this one was a record breaker in size and attendance. In addition to all the industry news and trends and buzz on the floor, the intriguing IAAPA-specific news is that the association itself will soon relocate its US headquarters to Orlando. This seems like a fitting move. The Expo will remain in Orlando for many years, and in view of IAAPA’s global growth over the past decade, with its Expos breaking records in Asia and Europe as well as North America, the association seems better placed in one of the world’s theme park capitals than Alexandria, Virginia’s cluster of nonprofits.

Not too many years ago it was common shorthand to just say “IAAPA” in reference to the annual show in North America, but now that there’s a hefty global structure and three annual Expos firmly in place, we distinguish the association from its events, and call the Orlando gathering the IAE.

IAE is a vast universe with various, overlapping quadrants whose organization reflects the evolving industry. When the Themed Entertainment Association (TEA) was founded in 1994, for instance, it helped galvanize the creation of a High Tech area, enabling certain categories of exhibitors and members to find one another more readily.

Today the TEA booth at IAE functions as a node for its particular niche of the attractions industry and a platform for TEA business including announcing the annual slate of Thea Awards recipients. The Nov 15 Theas announcement, delivered as usual to a full house, was read by David Willrich of DJ Willrich Ltd., who would, on Nov 16 officially become the new TEA International Board President, succeeding Steve Birket of Birket Engineering who held the office for two years.

One aisle over was InPark’s booth. We have learned from the community we serve that a themed environment is a conversation starter, so we always have a touch of theming in our booth – this year it was Yoga, and delegates were invited to lie down on our mats and stretch if they felt the call, or use one of our handy massage tools.

And so, the stage was set for dialog and discussion in our quadrant of the IAE universe. Whether in the snug setting of the InPark booth, roaming the floor, attending mixers after hours, or out and about in Orlando with the ever-present Orlando Eye a reminder of our industry and our mission – we tried to tune into the buzz, identify the flavor, take the temperature of things. IAE Orlando is the year-end time for summarizing, so here are some IPM takeaways with links to more:

The museum community is present in ever larger numbers. There has always been a lot of movement between the theme park sector and the museum sector in terms of designers, suppliers and media producers. From certain viewpoints the markets have a great deal in common, in terms of target audience, competition with in-home leisure options, tourism and travel tie-ins, and of course the supplier community that serves them. There are similar parallels with zoos and aquariums, and as a result, a great deal of outreach and dialog between the sectors takes place.

IAAPA devotes a good chunk of conference time to museums, zoos and aquariums. TEA Thea Award recipients cover all these areas, and TEA expanded its annual TEA/AECOM Theme Index to include a Museum Index several years ago. Everyone benefits from the shared wisdom, and the buyer mix one encounters on the floor is more diverse. (See IPM issue #61, Museums & Expanding Markets; IPM issue #64, Waterparks, Zoos & Aquariums.)

Flying attractions continue to gather momentum. Numerous ride manufacturers have competitive flying theater systems on the market today, and from conversations on the floor at the IAAPA Attractions Expo this year with media producers, attraction producers, manufacturers and operators, the trend is still going at full speed. These large, specialty theaters combine motion simulation and cinema to immerse guests into an experience of flying over a landscape or through a storytelling environment. Ever since the first Soarin’ opened at Disney’s California Adventure in the early 1990s, flying attractions have been taking off around the world. They are embraced by destination tourism operators and by theme parks as top guest draws. InPark has been at the forefront of industry reporting on this unique ride concept. (See “Flying High” and “Ride Systems of Flying Theaters” from InPark Issue #62, and “The next generation of immersive attractions” from Issue #51.) 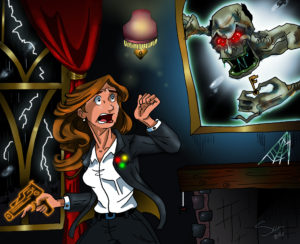 The Holodeck is here. There is much activity, success and momentum in the trend to immersive, “Holodeck” type environments that respond to guests’ actions as if by magic, and deliver what today’s digitally sophisticated audience expects in quality, seamlessness and interactivity. There are many different technologies being applied and products being developed for a wide range of experiences and venues. Terms that apply include “gamification,” “digital overlay,” “scavenger hunt,” “bring your own device,” and “connected immersion” (the latter is the name of a new category of Thea Award). (See “The new interactivity,” IPM issue #63, “Chimelong Scare-adise”) 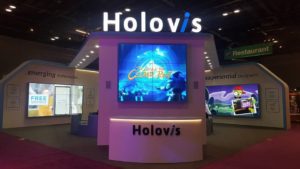 VR is on the front burner and there are lots of recipes to try. Virtual Reality (VR) popped up in our industry in the 1990s and has now returned to reap the benefits of improved technology and major investment from several directions. For media producers and distributors, VR represents new opportunities to create content. There remain many issues not fully resolved concerning the medium’s application to shared experiences – having to do with operations and throughput, maintenance and hygiene, storytelling and resolution, how to effectively compete with in-home versions – and whether the market would be better served by Augmented Reality (AR) or Mixed Reality (MR), VR as an important tool of pre-visualization, etc etc…. Operators have been quick to implement VR on roller coasters, and there was no shortage of VR displays on the IAAPA showroom floor. See “The New Realities,” IPM issue #63.

IP, licensed and housemade – The way the industry talks about and defines itself is an important signal of changes and trends. A shift in terminology represents a shift in thinking. Lately, we are hearing design firms describe themselves as creators of proprietary IP for their clients. Mascots aren’t mascots anymore – they are proprietary, licensed characters. This denotes a keener awareness of the value and potential of these creations at the time they are created. Meanwhile, studios, brands and other creative sources have taken a more energetic, direct role and holistic approach in licensing IP for themed entertainment – yesterday’s spinoff attraction has become today’s cross-platform of continuity and audience retention – and why stop at an attraction if you’ve got enough IP to fill a whole theme park? See “Peanuts brand strategically expanding into location based entertainment,” “The Bollywood IP treasure trove,” “Bringing Plants vs Zombies to Life,” “Because It’s Crayola,” “Chimelong Ocean Kingdom Nighttime Parade.”

Show control is the new black. Or is it the secret sauce? Or the lifeblood of attractions? Technically speaking, of course. We know storytelling is king, but show control and technical integration are what turns a pile of gear into a storytelling delivery system. Show control is what makes one black box talk to another black box, what drives seamlessness and synchronization and cues, what makes it possible for systems to be very sophisticated and complex, yet simple to operate. Show control specialists can speak the language of IT, which is an increasingly valuable trait as parks and other venues adopt enterprise systems. (See “Isaac Takes Control,” “Barco acquires Medialon,” “Alcorn McBride RidePlayer,” “InfoComm and the annual Geekout.”)

What went on in your quadrant of the IAAPA Attractions Expo?

Judith Rubin
Judith Rubin ([email protected]) is a leading journalist, publicist, strategist, blogger, content marketing specialist and connector in the international attractions industry. She excels at writing about all aspects of design and technical design, production and project management. Areas of special interest include AV integration and show control, lighting design and acoustics, specialty cinema, digital video and world’s fairs. Judith has ties to numerous industry organizations. From 2005-2020 she ran communications, publications and social media for the Themed Entertainment Association (TEA). In 2013, she was honored with the TEA Service Award. She was development director of IMERSA, and co-chair of the 2014 IMERSA Summit. She was publicist for the Large Format Cinema Association in the 1990s, now part of the Giant Screen Cinema Association (GSCA) and has also contributed to the publications of PLASA, IAAPA and the International Planetarium Society. Already making her mark as a magazine and book editor, Judith joined World’s Fair magazine in 1987, which introduced her to the attractions industry. Launching as a freelancer in the mid 1990s she has contributed to dozens of publications and media outlets including Funworld, Lighting&Sound America, Sound & Communications, Urban Land, The Raconteur and The Planetarian. She joined InPark in 2010. Judith earned a Bachelor of Fine Arts from Pratt Institute. She has lived in New York City and the San Francisco Bay Area, and now makes her home in Saint Louis, where she is active in the local arts and theater community.
Share
Facebook
Twitter
Linkedin
Email
Print
WhatsApp
Pinterest
ReddIt
Tumblr
Previous articleKeeping it Dynamic
Next articleA Marriage of Concepts: InPark Visits the IAAPA Attractions Expo 2016