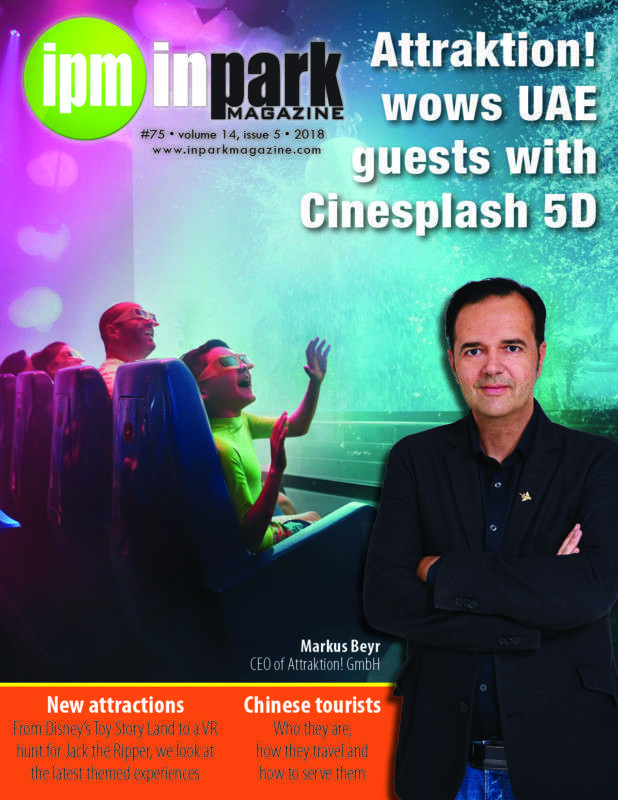 ISSUE #75 COVER STORY: This summer, Attraktion! opened a Cinesplash 5D theater at Yas Waterpark in Abu Dhabi, UAE. Markus Beyr, CEO at Attraktion!, talks about the evolution of the company and its various products.

Business 101 stresses that companies must change to meet the needs of an evolving marketplace. Our industry is no exception. From Attraktion!’s product rollouts to WhiteWater’s branding initiative, new ideas have to be backed up periodically with fresh business models and strategies.

The principle also applies to people. Folks like Jumana Brodersen, Mark Andrew, Yves Pépin and Geoff Thatcher all have impressive skillsets, but their success relies on being able to adapt to different environments, including navigating from being part of a corporate team to becoming an entrepreneur.

Magazines evolve also. InPark certainly looks different than it did 14 years ago – for one thing, this is our largest issue ever – and I think we have learned to serve the industry in a way that is helpful, timely and differentiated from other media outlets.

We also are taking the good news of themed entertainment into different markets, particularly tech and A/V arenas. Towards that end, we have shuffled our calendar around for next year in order to provide additional distribution at the Integrated Systems Europe (ISE) conference in Amsterdam. That issue will publish in December, shortly after the IAAPA expo and will also have distribution at Dubai’s DEAL show.

We will be working on stories for that end-of-year issue in Orlando during IAAPA, so please come see us at booth #1771 if you have a good story for that issue. We’ll have back issues from the year available and a friendly ear listening to ideas and suggestions from you.

I have been reporting on the world of visitor attractions for three decades. I’ve been on staff with InPark since 2010, but my start was at World’s Fair magazine in 1987. A world’s fair is a major land development conceived, designed and built on a compressed schedule, with entertaining and educational exhibits, corporate sponsors, hospitality components, transportation, food and beverage and an international audience. Ideally, it’s innovative in design, guest experience and placemaking, with significant, long-term positive impact on its region… you see the connection…

Thirty years in one industry is long enough to create a lot of relationships. It’s also long enough for new generations to pop up who don’t know you from Eve. The industry is a better place when we are able to pause and get acquainted – to learn from and appreciate one another.

Today’s technology simplifies the job. Someone can quickly research who you are and what you have done. That is assuming you’ve taken steps to ensure there is something to find – your profile, case studies, photos, industry ties, awards, rebrands and milestones.

InPark is a resource for creating such records – we’re a vehicle of institutional memory for the industry. We’ve even got our own archives project going – re-publishing online InPark’s vintage issues. As we all keep evolving and moving forward, don’t rest on your laurels – but do make sure they are documented and published somewhere.

The pearls and pixels of Attraktion! Cinesplash 5D opens in Abu Dhabi, highlighting the company’s attraction capabilities • by Martin Palicki

TPG tackles Orlando The Producers Group expands around the world, including Orlando • by Rick West

Fire and water Yves Pépin, artist of the spectacular • by Judith Rubin

A Desperado, with pirates Benoit Cornet’s ride from corporate finance to Alterface and interactivity • by Joe Kleiman

Cut the ribbon! Lexington employs its design-build process to bring Idaho’s past into the future • by Joe Kleiman

Joe Kleimanhttp://wwww.themedreality.com
Raised in San Diego on theme parks, zoos, and IMAX films, InPark's Senior Correspondent Joe Kleiman would expand his childhood loves into two decades as a projectionist and theater director within the giant screen industry. In addition to his work in commercial and museum operations, Joe has volunteered his time to animal husbandry at leading facilities in California and Texas and has played a leading management role for a number of performing arts companies. Joe previously served as News Editor and has remained a contributing author to InPark Magazine since 2011. HIs writing has also appeared in Sound & Communications, LF Examiner, Jim Hill Media, The Planetarian, Behind the Thrills, and MiceChat His blog, ThemedReality.com takes an unconventional look at the attractions industry. Follow on twitter @ThemesRenewed Joe lives in Sacramento, California with his wife, dog, and a ghost.
Share
Facebook
Twitter
Linkedin
Email
Print
WhatsApp
Pinterest
ReddIt
Tumblr
Previous article
Rethink Leisure and Entertainment: A Lotte water
Next article
Michael Turner named Vice President Global Business Development at The Producers Group